The FIFA World Cup, often simply called the World Cup, is an international association football competition contested by the senior men's national teams of the members of the Fédération Internationale de Football Association (FIFA), the sport's global governing body. The tournament has been held every four years since the inaugural tournament in 1930, except in 1942 and 1946 when it was not held because of the Second World War. The reigning champions are Argentina, who won their third title at the 2022 tournament. 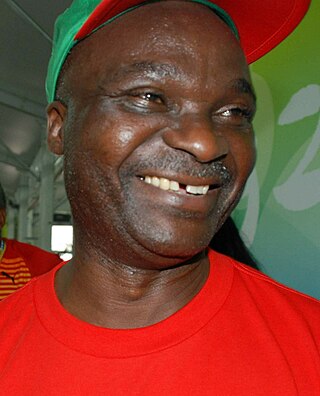 Albert Roger Miller, known as Roger Milla, is a Cameroonian former professional footballer who played as a forward. He was one of the first African players to be a major star on the international stage. He played in three World Cups for the Cameroon national team.

The Nigeria national football team represents Nigeria in men's international football. Governed by the Nigeria Football Federation (NFF), they are three-time Africa Cup of Nations winners, with their most recent title in 2013. In April 1994, the Nigerian national football team was ranked 5th in the FIFA rankings, the highest FIFA ranking position ever achieved by an African football team. Throughout history, the team has qualified for six of the last eight FIFA World Cups, missing only the 2006 and 2022 editions. They have reached the round of 16 on three occasions. Their first World Cup appearance was the 1994 edition. The team is a member of FIFA and Confederation of African Football (CAF).

The Egypt national football team, known colloquially as "the Pharaohs", represents Egypt in men's international football, and is governed by the Egyptian Football Association (EFA), the governing body of football in Egypt. The team's historical stadium is Cairo International Stadium, although matches are sometimes played at Borg El Arab Stadium in Alexandria. 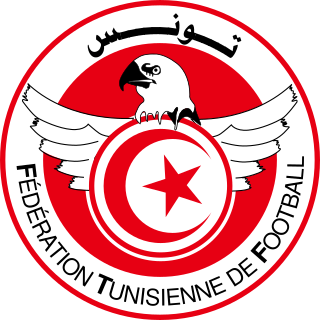 The Tunisia national football team represents Tunisia in men's international association football. The team is a member of both FIFA and CAF, the Confederation of African Football. It is governed by the Tunisian Football Federation, founded in 1957. Colloquially known as the Eagles of Carthage, the team's colours are red and white, and the bald eagle is its symbol. Most of Tunisia's home matches are played at the Stade Olympique de Radès in Radès since 2001. Jalel Kadri has been coaching the team since 30 January 2022.

Stephanie Jayne Darby is an English professional footballer who plays for Women's Super League club Manchester City and the England women's national team. At club level, Houghton started at Sunderland in her native North East England before moving on to Leeds United in 2007 then Arsenal Ladies in 2010. She broke into the Sunderland team as a striker before moving back into midfield and later into defence. 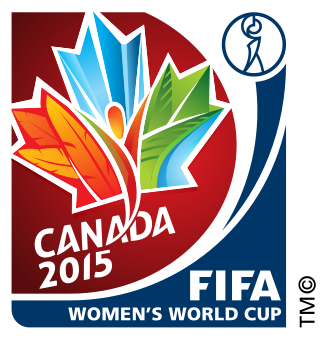 The 2015 FIFA Women's World Cup was the seventh FIFA Women's World Cup, the quadrennial international soccer championship contested by the women's national teams of the member associations of FIFA. The tournament was hosted by Canada for the first time and by a North American country for the third time. Matches were played in six cities across Canada in five time zones. The tournament began on 6 June 2015, and finished with the final on 5 July 2015 with a United States victory over Japan.

Ajara Nchout Njoya is a Cameroonian professional footballer who plays as a forward for Serie A club Inter Milan and the Cameroon women's national team. 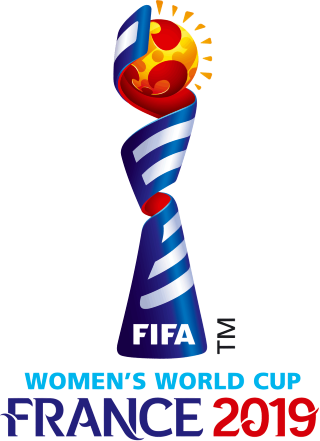 The 2019 FIFA Women's World Cup was the eighth edition of the FIFA Women's World Cup, the quadrennial international Women's association football championship contested by 24 women's national teams representing member associations of FIFA. It took place between 7 June and 7 July 2019, with 52 matches staged in nine cities in France, which was awarded the right to host the event in March 2015, the first time the country hosted the tournament. The tournament was the first Women's World Cup to use the video assistant referee (VAR) system. This was the second and last edition with 24 teams before expanding to 32 teams for the 2023 tournament in Australia and New Zealand.

Madeleine Michèle Ngono Mani Epse Ongueme, known as Madeleine Ngono Mani, is a Cameroonian football striker currently playing for Albi Croix in the French second tier. She is a member of the Cameroonian national team, with which she has played the 2012 Summer Olympics, the African Women's Championship, and the 2015 FIFA Women's World Cup.

Kadeisha Buchanan is a Canadian soccer player who plays as a centre-back for English Women's Super League club Chelsea and the Canada national team. Born in Toronto and raised in Brampton, Ontario, she is the youngest of seven girls in a single-parent home. Buchanan was only 17 when she made her debut for the national team on January 12, 2013.

The 2023 FIFA Women's World Cup is scheduled to be the ninth edition of the FIFA Women's World Cup competition, the quadrennial international women's football championship contested by the women's national association football teams organised by FIFA. The tournament will be jointly hosted by Australia and New Zealand and is scheduled to take place from 20 July to 20 August 2023; it will be the first FIFA Women's World Cup to have more than one host nation, and also be the first senior World Cup of either gender to be held across multiple confederations, as Australia is within the Asian Confederation while New Zealand is within the Oceania Confederation. In addition, this tournament will be the first to feature the expanded format of 32 teams, from previous 24, replicating the same format used for the men's World Cup. The opening match will be contested between New Zealand and Norway at Eden Park, Auckland on 20 July 2023. The final will take place on 20 August 2023 at Stadium Australia, Sydney. The United States are the defending champions, having won the previous two tournaments.

Therese Ninon Abena, known as Ninon Abena, is a Cameroonian footballer who plays as a midfielder for ACF Torino and the Cameroon women's national team.