Jackie Kallen (born Jackie Kaplan, April 23, 1946) is one of boxing's first and most successful female managers. Her life was the inspiration for the 2004 film Against the Ropes , starring Meg Ryan as Kallen, [1] [2] in which she had a brief speaking role as a reporter. She also worked as a consultant for Mark Burnett's reality TV series The Contender . [3]

Kallen was raised in a middle-class Jewish family in Detroit. [4]

A show business journalist for a magazine in the 1970s, Kallen interviewed the Rolling Stones, Frank Sinatra, Elvis Presley and countless others. In 1977 she was assigned to interview a boxing prospect from the Kronk gym in Detroit, Michigan, Thomas Hearns. Kallen became fascinated with sports and began working as a sports journalist specializing in boxing.

Kallen spent a decade as Hearns' publicist as Hearns went on to face Sugar Ray Leonard in two championship fights. In the process she became well known around Detroit's boxing circles but met with sexism along the way.

Kallen made her managerial debut with heavyweight Bobby Hitz in 1988. She managed her first champion in 1991, James Toney knocking out Michael Nunn in eleven rounds to win the IBF world Middleweight title. Another Kallen fighter, Bronco McKart, won the WBO world Jr. Middleweight title in 1996.

Her business relationship with Toney was controversial but allowed her to gain celebrity among boxing's hard-core fans. She was featured in Ring and KO Magazine . Kallen referred to Toney many times as someone she loved like a son, but there were rampant rumors that she and Toney did not get along well behind the scenes. The pair had an on and off friendship until their bond was finally broken in the late 1990s.

Kallen was diagnosed both with heart disease and cancer during that decade, but after three surgeries she recovered and is enjoying good health.

Kallen currently lives in the Detroit area and manages three professional boxers, including Bronco McKart and a prospect from the Philippines. 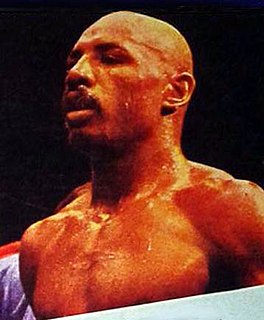 Marvelous Marvin Hagler is an American former professional boxer and film actor who competed in boxing from 1973 to 1987. He reigned as undisputed middleweight champion from 1980 to 1987, making twelve successful defenses of that title, and holds the highest knockout percentage of all undisputed middleweight champions, at 78%, while also holding the Third-longest unified championship reign in boxing history at twelve consecutive defenses. At six years and seven months, his reign as undisputed middleweight champion is the second-longest of the last century, behind only Tony Zale, whose reign included several years of inactivity during his service in World War II. In 1982, annoyed that network announcers often did not refer to him by his nickname "Marvelous", Hagler legally changed his name to "Marvelous Marvin Hagler".

Ray Charles Leonard, best known as "Sugar" Ray Leonard, is an American former professional boxer, motivational speaker, and occasional actor. Often regarded as one of the greatest boxers of all time, he competed from 1977 to 1997, winning world titles in five weight divisions; the lineal championship in three weight divisions; as well as the undisputed welterweight title. Leonard was part of "The Fabulous Four", a group of boxers who all fought each other throughout the 1980s, consisting of Leonard, Roberto Durán, Thomas Hearns, and Marvin Hagler.

The World Boxing Council (WBC) is one of four major organizations which sanctions professional boxing bouts, alongside the World Boxing Association (WBA), International Boxing Federation (IBF) and World Boxing Organization (WBO). Many historically high-profile bouts have been sanctioned by the organization with various legendary fighters having been recognised as WBC world champions. All four organizations recognise the legitimacy of each other and each have interwoven histories dating back several decades. 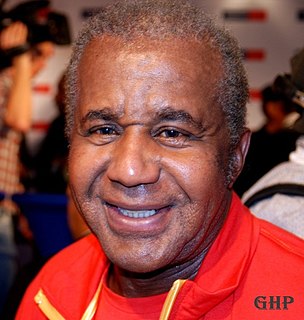 Emanuel "Manny" Steward was an American boxer, trainer, and commentator for HBO Boxing. Steward trained 41 world champion fighters throughout his career, most notably Thomas Hearns, through the famous Kronk Gym and later heavyweights Lennox Lewis and Wladimir Klitschko. His heavyweight fighters had a record of 34-2-1 combined in title fights. He was an inductee of the International Boxing Hall Of Fame, and the World Boxing Hall of Fame. Steward was also known for his charity work in Detroit, Michigan, helping the youth to attain an education. 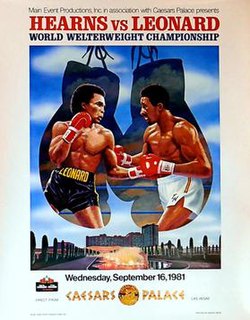 Sugar Ray Leonard vs. Thomas Hearns, billed as "The Showdown", was a professional boxing match contested on September 16, 1981 for the WBA, WBC, The Ring and lineal welterweight titles.

Kronk Gym is a boxing gym located in Detroit, once led by trainer Emanuel Steward. It was run out of the basement of the oldest recreation center of the City of Detroit, and became a household word in the sport of boxing and its gold shorts a magnet to young talent following the enormous success and high profile of multiple World Champion and Boxing Hall of Famer Thomas "The Hitman" Hearns in the 1980s.

Against the Ropes is a 2004 American sports drama film directed by Charles S. Dutton and starring Meg Ryan and Omar Epps. The story is a fictionalized account of boxing manager Jackie Kallen, the first woman to achieve success in the sport. Kallen has a bit part in the film playing a reporter, and a few lines in the scene where the press interviews the principal characters.

Tarick Salmaci is a Lebanese-American former professional boxer and North American Boxing Organization (NABO) middleweight champion. He was one of 16 boxers chosen worldwide to participate on season 1 of NBC's reality television series The Contender.

Jimmy Lange is a professional boxer from Virginia.

Cornelius Bundrage is an American professional boxer. He is a two-time former world champion, having held the IBF junior middleweight title twice between 2010 and 2015. In 2006 he was a contestant on season two of the Contender reality TV show, where he reached the semi-finals.

Bronco Banyon McKart is an American former professional boxer who competed from 1992 to 2014 and held the WBO light middleweight title in 1996. McKart is best known for his trilogy of fights against Winky Wright.