Joconde is the central database created in 1975 and now available online, maintained by the French Ministry of Culture, for objects in the collections of the main French public and private museums listed as Musées de France, according to article L. 441-1 of the Code du patrimoine [3] amouting to more than 1,200 institutions. [4]

The database is not only dedicated to the information of the public but as well to the needs of the administrators and curators of the museums, thanks to the online presentation of professional tools to facilitate notably the museums collections cataloguing and state inventory (récolement). This explains the great precision of the listings. Since the museums participate on a voluntary basis to the regular enrichment of the database, some can present a large part of their collection, while others appear only because of the mere permanent deposits made by the first ones.

Live on the French Minitel system from 1992, the database went online to the World Wide Web in 1995. Originally just for objects from the fine arts and decorative arts, in 2004 Joconde was united with what had been separate databases for objects from archeology and ethnology. It comes under the "Direction des Musées de France" (DMF) section of the Ministry.

The listing details are highly structured, using a special vocabulary, which allows for very specific and accurate searches, helped as well by the index. A small number of the best known objects have a prose commentary. Not all images are in colour, especially for the archaeological collections. When an object created after the 19th century has no image this is most often for copyright reasons.

Louise Catherine Breslau was a German-born Swiss painter, printmaker, and pastel artist active in France. She trained at the Académie Julian in Paris and exhibited at the salon of the Société Nationale des Beaux-Arts in Paris in the late nineteenth-century. 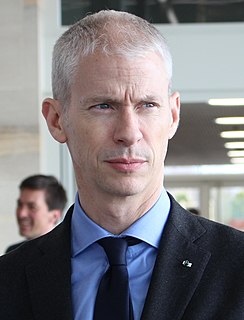 The Ministry of Culture is the ministry of the Government of France in charge of national museums and the monuments historiques. Its goal is to maintain the French identity through the promotion and protection of the arts on national soil and abroad. Its budget is mainly dedicated to the management of the Archives Nationales and the regional Maisons de la culture. 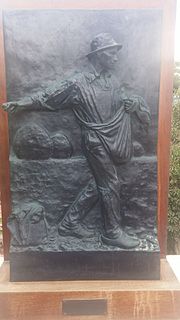 Félix-Alexandre Desruelles (1865–1943) was a French sculptor who was born in Valenciennes in 1865. He was runner up for the Prix de Rome in 1891, won the Prix national des Salons in 1897 and a Gold Medal at l'Éxposition Universelle in 1900. He died in La Flèche in 1943. He was a member of the Institut de France and of the Académie des Beaux-Arts.

Venus Anadyomene is a painting by the French painter Jean-Auguste-Dominique Ingres. It is now held at the Musée Condé, Chantilly, France. It is a female nude of the Venus Anadyomene type, showing the goddess Venus rising from the sea.

Don Pedro of Toledo Kissing Henry IV's Sword is an 1814 painting in the Troubador style by the French artist Jean-Auguste-Dominique Ingres, showing the Spanish ambassador Pedro Álvarez de Toledo, 5th Marquis of Villafranca kissing the sword of Henry IV of France in the salle des Caryatides of the Louvre palace. The painting is now lost. Between 1819 and 1832, Ingres painted three additional paintings of the subject.

This is a translation of the Wikipedia article written in the French language. 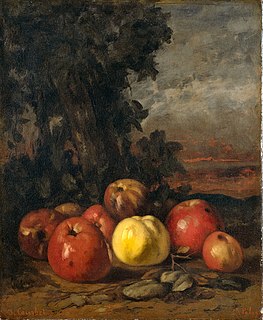 Still-Life with Fruits is a series of still life paintings produced between 1871 and 1872 by Gustave Courbet, marking his return to painting after the silence forced on him by the Franco-Prussian War, the Paris Commune, imprisonment and illness. 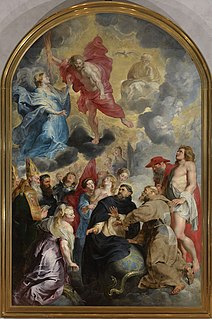 St Francis is a 1659 painting of Francis of Assisi by Francisco de Zurbarán. It was the only work by the artist known in France before the 19th century.

Holy Family or Nativity is a 1500–1550 oil on panel painting created by Italian painter of the Renaissance Lorenzo Costa. It has been collected in the Museum of Fine Arts of Lyon since 1892.

River with Trees is a brown wash landscape drawing by Rembrandt, dating to c. 1654-1655 and now in the Louvre in Paris.

Allegory of the Vanities of the World is a 1663 painting by the Flemish painter Pieter Boel, now in the Palais des Beaux-Arts de Lille. It is unusually large for a vanitas painting.

Berthe Morisot with a Fan is an 1874 painting by Édouard Manet. It is the last of twelve portraits Manet produced of Berthe Morisot between 1868 and 1874, painted just after her marriage to the painter's brother Eugène, after which she no longer posed for him. It shows her dressed in mourning for her father but wearing an engagement ring. 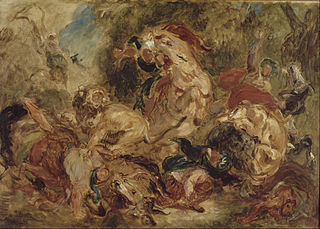 The Lion Hunt is an 1855 Orientalist painting by Eugène Delacroix, whose top half was destroyed in an 1870 fire at the Musée des beaux-arts de Bordeaux. A complete sketch of the work survives in the Musee d'Orsay. A movement study also survives - this was partly painted in the open air, but finished in the studio.