Julianne Ethel Beckett (née O'Connell; November 9, 1949 – May 13, 2022) was an American teacher and disability rights activist. She lobbied for changes to Medicaid that allowed hundreds of thousands of disabled children to be cared for by their families at home. [1] [2] [3] Her efforts, and those of other activists, led to the legislation and establishment of the Katie Beckett Medicaid waiver, named for her daughter Mary Katherine Beckett (1978–2012), who used a ventilator after surviving viral encephalitis in infancy. [4] The waiver was included as a provision of the Tax Equity and Fiscal Responsibility Act of 1982. [5]

Julianne O'Connell was born in Cedar Rapids, Iowa, one of the eight children born to John Joseph O'Connell and Barbara Jane Ryan O'Connell. Her family was Roman Catholic; her father was a World War II veteran and a lumber salesman. [6] [7] She graduated from Regis High School in 1967, and from Clarke College in Dubuque in 1971; she earned a master's degree in history from the University of Dayton. [8]

Julie Beckett was a part-time teacher and worked in a record store, before becoming her only child's full-time caregiver. [8] She was also state director of Sick Kids Need Involved People (SKIP), and later co-founder and policy coordinator for Family Voices, a national lobbying organization. [5] [9] She testified before Congressional hearings several times. [10] She remained active in Medicaid reform work after the Katie Beckett waiver was established; "my goal is that no child will ever have to go through what my child had to go through," she told a newspaper in 1995. [11] She was honored as a child advocate in 2000, [12] and as a local hero at the Cedar Rapids Freedom Festival in 2005. [13]

Julie O'Connell and Mark Beckett married in 1978; they divorced in 1990. Their daughter Katie was born prematurely in 1978, [8] and died in 2012. [14] Beckett died from a heart attack in May 2022, at the age of 72. [2] "Thanks to Julie's tireless advocacy, millions of Americans, including hundreds of thousands of children with complex medical needs, have been able to receive the care and support they need in their homes rather than in institutional settings", said Daniel Tsai of the Centers for Medicare & Medicaid Services, a federal agency. [15]

According to the United States Government Accountability Office (GAO), there are 1,138 statutory provisions in which marital status is a factor in determining benefits, rights, and privileges. These rights were a key issue in the debate over federal recognition of same-sex marriage. Under the 1996 Defense of Marriage Act (DOMA), the federal government was prohibited from recognizing same-sex couples who were lawfully married under the laws of their state. The conflict between this definition and the Due Process Clause of the Fifth Amendment to the Constitution led the U.S. Supreme Court to rule DOMA unconstitutional on June 26, 2013, in the case of United States v. Windsor.

Kay Mellor was an English actress, scriptwriter, producer and director. She was known for creating television shows such as ITV drama Fat Friends (2000–05), as well as co-creating CITV's children's drama Children's Ward (1989–2000). 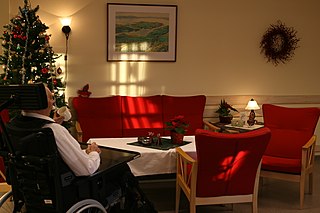 Long-term care (LTC) is a variety of services which help meet both the medical and non-medical needs of people with a chronic illness or disability who cannot care for themselves for long periods. Long term care is focused on individualized and coordinated services that promote independence, maximize patients' quality of life, and meet patients' needs over a period of time.

The California Medical Assistance Program is California's Medicaid program serving low-income individuals, including families, seniors, persons with disabilities, children in foster care, pregnant women, and childless adults with incomes below 138% of federal poverty level. Benefits include ambulatory patient services, emergency services, hospitalization, maternity and newborn care, mental health and substance use disorder treatment, dental (Denti-Cal), vision, and long term care and supports. Approximately 13.3 million people were enrolled in Medi-Cal as of January 2018, or about one-third of California's population; in Tulare County and Merced County, more than 50% of county residents were enrolled as of September 2015.

A group home is a residence model of medical care for those with complex health needs. Traditionally, the model has been used for children or young people who cannot live with their families or afford their own homes, people with chronic disabilities who may be adults or seniors, or people with dementia and related aged illnesses. Typically, there are no more than six residents, and there is at least one trained caregiver there 24 hours a day. In some early "model programs", a house manager, night manager, weekend activity coordinator, and four part-time skill teachers were reported. Originally, the term group home referred to homes of 8 to 16 individuals, which was a state-mandated size during deinstitutionalization. Residential nursing facilities, also included in this article, may be as large in 2015 as 100 individuals, which is no longer the case in fields such as intellectual and developmental disabilities. Depending on the severity of the condition requiring one to need to live in a group home, some clients are able to attend day programs and most clients are able to live normal lifestyles.

Nan Wood Graham was an American artist and art teacher. She was the sister of painter Grant Wood. She is best known as the model for the woman in her brother's most famous painting, American Gothic (1930).

La Rabida Children's Hospital is a small pediatric specialty hospital for extended acute care that caters to children with lifelong medical conditions. Located on the South Side of Chicago on Lake Michigan, the facility is designed to showcase its lakeside views. La Rabida serves approximately 9,000 children annually who require primary and specialty care to address complex and challenging medical conditions. The hospital provides care to all patients regardless of the family's ability to pay. Services and programs include treatment for chronic illnesses such as asthma, diabetes, sickle cell disease, and developmental disabilities. In addition, La Rabida specializes in the treatment of children who have been abused, neglected or experienced trauma. 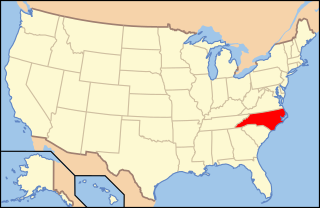 The state of North Carolina is undertaking a comprehensive policy shift on how the government budgets for and manages resources for mental health, developmental disability, and substance abuse services. The 1915 (b)(c) Medicaid Waiver Program was chosen by the North Carolina Department of Health & Human Services, Division of Medical Assistance as a way to control and more accurately budget for the rising costs of Medicaid funded services. The 1915 (b)(c) Waiver Program was initially implemented at one pilot site in 2005 and evaluated for several years. Two expansion sites were then added in 2012. Full statewide implementation is expected by July 1, 2013.

The Utah HCBS waiver program is a state-run program that serves individuals in Utah with intellectual disabilities or related conditions (ID/RC). HCBS stands for Home and Community-Based Services.

Medicaid Waiver programs help provide services to people who would otherwise be in an institution, nursing home, or hospital to receive long-term care in the community. Prior to 1991, the Federal Medicaid program paid for services only if a person lived in an institution. The approval of Federal Medicaid Waiver programs allowed states to provide services to consumers in their homes and in their communities.

As of 2017, approximately 1.4 million Americans live in a nursing home, two-thirds of whom rely on Medicaid to pay for their care. Residential nursing facilities receive Medicaid federal funding and approvals through a state health department. These facilities may be overseen by various types of state agency. 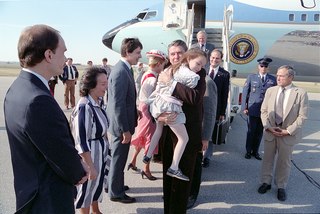 A Katie Beckett waiver or TEFRA waiver is a Medicaid waiver concerning the income eligibility for home-based Medicaid services for children under the age of nineteen. Prior to the Katie Beckett waiver, if a child with significant medical needs received treatment at home, all of the financial resources of the parents would be "deemed" as the income of the child for the purposes of determining Medicaid eligibility. Only after a hospitalization lasting more than thirty days would the parents' income no longer be deemed to the child, allowing the child to then qualify for Medicaid coverage. The effect was that many families, unable to afford home treatment, kept their children in costly hospital settings in order to meet the Medicaid 30-day requirement. Katie Beckett waivers allow Medicaid to cover medical services for children in the home, regardless of the parents' income, in cases where home-based treatment will cost less than or the same as treatment in a hospital.

Mary Jane Aldrich was an American temperance reformer, lecturer, and essayist. She served as vice-president of the National Woman's Christian Temperance Union (WCTU) and president of the Iowa union. At the time of the division in the ranks of the WCTU, Aldrich, with the Iowa union, adhered to the non-partisan temperance work, and became evangelistic secretary of the National Non-Partisan union. As a temperance worker, she was characterized as sanguine and practical. As a speaker, she was bright, forceful, entertaining and logical.

Marilyn E. Saviola was an American disability rights activist, executive director of the Center for the Independence of the Disabled in New York from 1983 to 1999, and vice president of Independence Care System after 2000. Saviola, a polio survivor from Manhattan, New York, is known nationally within the disability rights movement for her advocacy for people with disabilities and had accepted many awards and honors for her work.

Mildred Hope Fisher Wood was an American teacher and a pioneer in special education. Wood was also an author and newspaper column writer. She received multiple honors.

Barbara Hillyer or Hillyer-Davis was the founding director of the Women's Studies courses at the University of Oklahoma. Her 1993 book, Feminism and Disability was the 1994 Emily Toth Award winner for the best feminist publication of the year and was also named as Outstanding Academic Book by the Association of College and Research Libraries's Choice Magazine. Her work explored the response of the disability and feminist rights movements to aging, chronic illness, disability, and mental health.