Greece competed at the 1996 Summer Olympics in Atlanta, United States. Greek athletes have competed in every Summer Olympic Games. 121 competitors, 87 men and 34 women, took part in 94 events in 18 sports.

Kateřina Pivoňková is a retired female backstroke swimmer from the Czech Republic, who twice competed for her native country at the Olympic Games: in 1996 and 2004.

The Women's 15 kilometre pursuit cross-country skiing competition at the 2006 Winter Olympics in Turin, Italy was held on 12 February, at Pragelato.

Mattias Tichy is a Swedish rower. 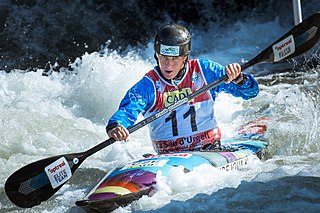 Kateřina Kudějová is a Czech slalom canoeist who has competed at the international level since 2005.

Niki-Katerina Sidiropoulou is a Greek fencer. She competed in the women's épée events at the 1996 and 2004 Summer Olympics.

Kateřina Šafránková is a Czech hammer thrower. She competed in the hammer throw event at the 2012 Summer Olympics. On May 20, 2016, she broke the national record in Ostrava with 72,34 m. She later beat that record with a mark of 72.47 in Kolin.

Katerina Balkaba is a Greek cross-country skier. She competed in two events at the 2002 Winter Olympics.

Martin Tichý is a Czech rower. He competed in the men's quadruple sculls event at the 1988 Summer Olympics.

Katerina Khristoforidou is a Greek gymnast. She competed in five events at the 2000 Summer Olympics.