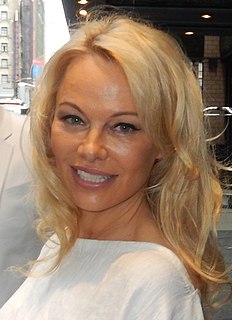 Pamela Denise Anderson is a Canadian-American actress, model and activist. She is known for her numerous appearances in Playboy magazine and for her work on the television series Home Improvement, Baywatch (1992–1997) and V.I.P. (1998–2002).

Louis Perry Anderson was an American stand-up comedian, actor, author, and game show host. Anderson created the cartoon series Life with Louie and the television sitcom The Louie Show, and wrote four books, including Hey Mom: Stories for My Mother, But You Can Read Them Too, which was published in 2018. He was the fourth host of the game show Family Feud, from 1999 to 2002, in its third run and second revival.

Anderson Hays Cooper is an American broadcast journalist and political commentator. He is the primary anchor of the CNN news broadcast show Anderson Cooper 360°. In addition to his duties at CNN, Cooper serves as a correspondent for 60 Minutes on CBS News.

Kenneth Allan Anderson is a former American football quarterback who spent his entire professional career playing for the Cincinnati Bengals of the National Football League (NFL) and later returned as a position coach. 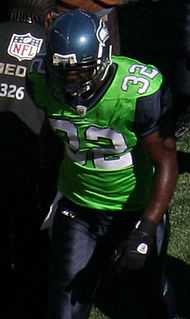 Edgerrin Tyree James is an American former professional football player who was a running back in the National Football League (NFL) for 11 seasons. He played college football for the Miami Hurricanes. He was drafted by the Indianapolis Colts fourth overall in the 1999 NFL Draft. James also played for the Arizona Cardinals and Seattle Seahawks. The AP NFL Offensive Rookie of the Year in 1999, he earned four Pro Bowl selections and four All-Pro selections. James is the Colts' all-time leader in career rushing yards, attempts, and touchdowns. James is 13th on the all-time rushing list, and a member of the 10,000 Yards rushing club. He was elected to the Pro Football Hall of Fame as a member of the Class of 2020.

Jeffrey Montgomery Reed is a former National Football League placekicker. He was signed by the New Orleans Saints as an undrafted free agent in 2002. He played for the Pittsburgh Steelers from 2002 until 2010, and is second all-time behind Gary Anderson for the most points scored by a Steeler. 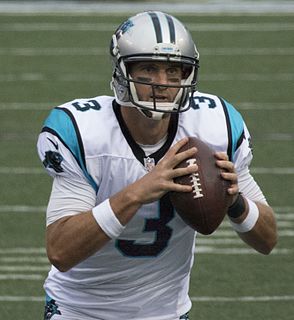 Derek Matthew Anderson is a former quarterback who played 14 seasons in the National Football League (NFL). He was drafted by the Baltimore Ravens in the sixth round of the 2005 NFL Draft. He played college football at Oregon State. A 2007 Pro Bowler, Anderson has also played for the Cleveland Browns, Arizona Cardinals, Carolina Panthers, and the Buffalo Bills. 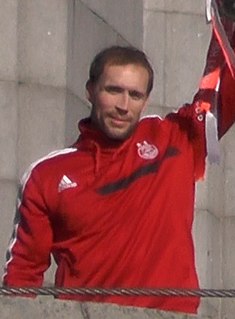 Russell Anderson is a Scottish former professional footballer who played as a centre back. He played in the Scottish leagues for Aberdeen, the Premier League for Sunderland, and the Football League for Plymouth Argyle, Burnley and Derby County. Anderson won 11 caps for Scotland at full international level between 2002 and 2008. 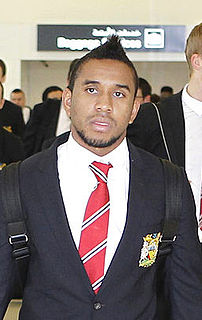 Anderson Luís de Abreu Oliveira, commonly known as Anderson, is a Brazilian retired professional footballer who works as assistant manager of Adana Demirspor. He played as a midfielder and known best for his tenure with Manchester United.

The following are the football (soccer) events of the year 1932 throughout the world.

Billy Guy Anderson was an American football quarterback who played professionally in the American Football League.

James William McLaren Morris was an Australian rules footballer who played for Richmond in the Victorian Football League (VFL), mostly during the 1940s. He played much of his football beside Jack Dyer as a knock ruckman. 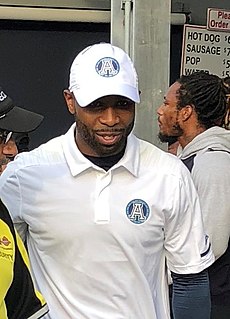 Tyron Lyle Brackenridge is a former Canadian football defensive backs coach for the Toronto Argonauts of the Canadian Football League. He is a former gridiron football cornerback who played the majority of his career with the Saskatchewan Roughriders of the Canadian Football League, where he won a Grey Cup championship in 2013. He was signed by the Kansas City Chiefs as an undrafted free agent in 2007. He played college football at Washington State.

Douglas Cowie was a Scottish footballer who played for Dundee, Greenock Morton and the Scotland national team. He played initially as a central defender but later converted to a left half.

Carl Rudolph Frederick "Swede" Anderson IV was an American college football coach at Western Kentucky University and Howard Payne University. Anderson graduated from Centre College in Danville, Kentucky in 1924, where he played in the backfield with legendary alumnus Bo McMillin. Anderson then followed McMillin to Centenary College of Louisiana and Geneva College. Anderson then served one year as the head football coach at Western Kentucky, before moving to Kansas State as its freshman team coach in 1930. Anderson returned to Western Kentucky as its head coach from 1934 to 1937. He was the backfield coach under McMillin at Indiana from 1938 to 1945. He then returned to his alma mater, Centre College, where he coached the Praying Colonels until 1950. The following season, Anderson became the seventh head football coach at the Howard Payne University in Brownwood, Texas and held that position from 1951 to 1952. His coaching record at Howard Payne was 7–10. Anderson died in 1978 of a heart attack, in Oceanside, California.

Noel James Kyle Anderson was an Australian professional darts player who played within the Professional Darts Corporation (PDC) from 2012 to 2021. He won the 2017 Auckland Darts Masters tournament. He was the brother of fellow darts player Beau Anderson.

Faithful Word Baptist Church is a fundamentalist Independent Baptist church in Tempe, Arizona, that was founded by Steven Anderson. The church describes itself as "an old-fashioned, independent, fundamental, King James Bible-only, soul-winning Baptist church." Members of the church meet in an office space that is located inside a strip mall. Anderson established the church in December 2005 and remains its pastor.