On June 30, 2007, Haga was arrested along with four others including former world champion professional boxer Jiro Watanabe, actor Ginji Yoshikawa [jp], [1] and two affiliates of the Yamaguchi-gumi syndicate; one Toshikazu Kawakita and the other unidentified. [2] The group were arrested over allegedly blackmailing a real estate agent in Osaka into forgiving 400 million yen's worth of Haga's debt.

Kōji Tsujitani was a Japanese actor, voice actor, narrator and director of audiography credited for voicing many anime and video game characters. Tsujitani used to be affiliated with Sigma Seven. He married Kumiko Watanabe in 2012. He died of a stroke on October 17, 2018.

Tetsuya Iwanaga is a Japanese voice actor. He is affiliated with maxmix.

Ken Narita is a Japanese actor, voice actor and narrator. His real name is Tsutomu Narita. He is currently a freelancer.

Kenji Nojima is a Japanese voice actor and singer affiliated with the voice talent agency Aoni Production. His first major role in voice-over was Spark in the Record of Lodoss War: Chronicles of the Heroic Knight series. He voiced Hikaru Ichijyo in a number of Macross-related video games in the 2000s. Other major roles include Yuto Kiba in High School DxD, Jade in Ultimate Muscle, Nobuchika Ginoza in Psycho-Pass, Keisaku Sato in Shakugan no Shana, Taihei Doma in Himouto! Umaru-chan, and Tuxedo Mask in Sailor Moon Crystal. In anime films, he voices Fumito Nanahara in Blood-C, Masaki in Time of Eve. He is the son of Akio Nojima and is the younger brother of Hirofumi Nojima. He married Chie Sawaguchi in 2004 and has two children.

Mitsuo Iwata is a Japanese actor, voice actor and singer who was born in Tokorozawa, Saitama. He is married to voice actress Rikako Aikawa. Mania.com praised him as "truly one of the greatest seiyuu". Otakunews.com complimented him for the role of Tetsuya from Outlanders. Mania.com comments on his role of Kintaro Oe that he "practiced months before hand, to the point of going hoarse from overwork, to perfect Kintaro's voice" and "there's no one who could replace him for this role". He is also known for the role of Kaneda in the 1988 anime film Akira and won the 7th Seiyu Awards for Best Personality in 2013. He was previously affiliated with Office Osawa and Across Entertainment, but is currently affiliated with Aoni Production.

Kazuki Yao is a voice actor and actor. 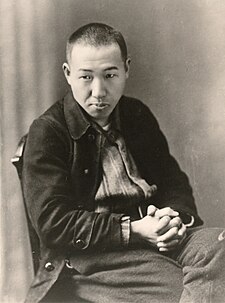 Kenji or Kenzi is a Japanese given name for boys.

Yūji Kishi is a Japanese actor and voice actor. He started his acting debut in the 1996 Super Sentai series, Gekisou Sentai Carranger as Red Racer Since then, he has become a very prominent voice actor in both Anime and video games. He is more prominently known as the main voice actor for Ken Masters in the Street Fighter series of video games produced by Capcom.

Street Fighter II V is an anime series produced by Group TAC that is loosely based on the 1994 fighting game Super Street Fighter II Turbo. Directed by Gisaburo Sugii, the series first aired in Japan in 1995, from April 10 to November 27, on YTV. An English adaptation of the series was produced by the dubbing group Animaze and Manga Entertainment in 1996, and was released in Australia and the US as a series of VHS tapes in 1997−1998. Each tape included three episodes, and was released in both a dubbed version and a subtitled version. In 1997, ADV Films produced an English dub exclusively for the UK market, also released on VHS. The Animaze/Manga dub had a DVD release on April 29, 2003 in a four disc set in North America and was then released on DVD in Australia.

Noguchi is a Japanese surname. Notable people with the surname include:

Kazuhiro Nakata is a Japanese voice actor affiliated with Ken Production. He played Bear in .hack//Sign and Fei-Wang Reed in Tsubasa: Reservoir Chronicle.

Ken Yamaguchi was a Japanese actor, voice actor and narrator. He was represented by OYS Produce. His son is a fellow voice actor Kiyohiro Yamaguchi.

Kenji Takahashi, known professionally as Kenji Ohba is a prolific Japanese actor and former stuntman best known for his roles in the Super Sentai and Metal Heroes series, especially as Retsu Ichijouji/Gavan in the 1982 TV series Space Sheriff Gavan. He is the president of his own action/stunt troupe called "Luck JET".

Hideo Haga is known for his photography of traditional Japanese festivals and folk culture.