This book has been adapted into the King & Maxwell TV series on TNT.

David Quantick is an English novelist, comedy writer and critic, who has worked as a journalist and screenwriter. A former staff writer for the music magazine NME, his writing credits have included On the Hour, Blue Jam, TV Burp and Veep – for the latter of these he won an Emmy in 2015.

The Dark Tower is a series of eight books and one short story written by American author Stephen King. Incorporating themes from multiple genres, including dark fantasy, science fantasy, horror, and Western, it describes a "gunslinger" and his quest toward a tower, the nature of which is both physical and metaphorical. The series, and its use of the Dark Tower, expands upon Stephen King's multiverse and in doing so, links together many of his other novels. 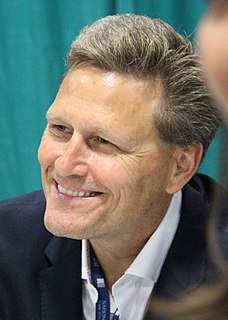 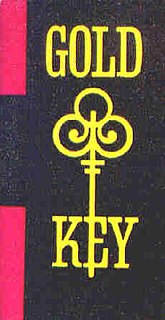 Brian Keene is an American author and podcaster, primarily known for his work in horror, dark fantasy, crime fiction, and comic books. He has won the 2014 World Horror Grandmaster Award and two Bram Stoker Awards. In addition to his own original work, Keene has written for media properties such as Doctor Who, Hellboy, Alien, Masters of the Universe, and The X-Files.

Karrine Steffans is an American author, most notably of the Vixen series of books. She has worked as an actress and as a video vixen, having appeared in more than 20 music videos. In 2007 and 2008, Steffans visited a number of college campuses to speak about her involvement in the hip hop industry and its expectations of women.

Leisure Books was a mass market paperback publisher specializing in horror and thrillers that operated from 1957 to 2010. In the company's early years, it also published fantasy, science fiction, Westerns, and the Wildlife Treasury card series.

Simple Genius is a thriller novel by American writer David Baldacci, which topped the New York Times bestseller list for the week ending April 28, 2007. The book was initially published on April 24, 2007 by Grand Central Publishing.

Jess David Spurlock is an author, illustrator, editor, and artist's-rights advocate best known as the founder of Vanguard Productions, a publisher of art books, graphic novels, and prints.

The Sixth Man is a crime fiction novel by American writer David Baldacci. The book was initially published on April 19, 2011 by Grand Central Publishing. This is the fifth installment in the King and Maxwell book series.

First Family is a crime fiction novel written by the American writer David Baldacci. This is the fourth installment in the King and Maxwell book series. The book was published on April 21, 2009, by Grand Central Publishing. 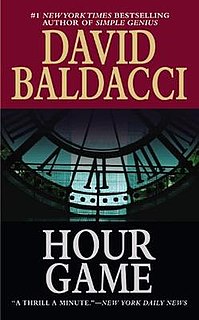 Hour Game is a crime fiction novel written by American writer David Baldacci. This is the second installment in the King and Maxwell book series. The book was published on October 26, 2004, by Warner Books. 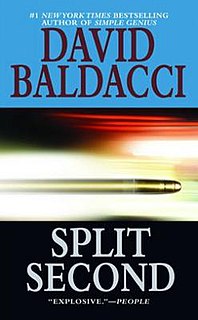 Split Second is a crime fiction novel written by American writer David Baldacci. This is the first novel in the King and Maxwell book series. The book was published on September 30, 2003, by Grand Central Publishing. 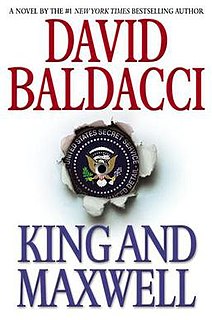 King and Maxwell is a crime fiction novel written by American writer David Baldacci. This is the sixth and final installment in the King and Maxwell book series. The book was initially published on November 19, 2013, by Grand Central Publishing.

The Guilty is thriller novel written by David Baldacci. It is the fourth installment to feature Will Robie, a highly skilled U.S. Government assassin. The book was released on November 17, 2015 by Grand Central Publishing.