A labyrinth seal may be composed of many grooves that press tightly inside another axle, or inside a hole, so that the fluid has to pass through a long and difficult path to escape. Sometimes screw threads exist on the outer and inner portion. These interlock, to produce the long characteristic path which slows leakage. For labyrinth seals on a rotating shaft, a very small clearance must exist between the tips of the labyrinth threads and the running surface. The "teeth" of the labyrinth seal may be on the rotating shaft (Teeth On Rotor - TOR) or on the stator (TOS), or both, in an interlocking configuration. [1]

Labyrinth seals on rotating shafts provide non-contact sealing action by controlling the passage of fluid through a variety of chambers by centrifugal motion, as well as by the formation of controlled fluid vortices. At higher speeds, centrifugal motion forces the liquid towards the outside and therefore away from any passages. Similarly, if the labyrinth chambers are correctly designed, any liquid that has escaped the main chamber becomes entrapped in a labyrinth chamber, where it is forced into a vortex-like motion. This acts to prevent its escape, and also acts to repel any other fluid. Because these labyrinth seals are non-contact, they do not wear out.

Many gas turbine engines, having high rotational speeds, use labyrinth seals due to their lack of friction and long life. Because liquid-filled labyrinth seals still generate heat due to the viscosity of the seal oil, and because seal oil can contaminate the process fluids, modern high-performance gas turbines use dry gas seals which use spring-loaded rings with an inert gas in between the faces of the rings to provide the seal. This creates even lower friction and provides a liquid-free seal. [2] However, such engines often have detectable oil leakage into the compression chamber. [3] Indeed, many gas turbine engine seals leak by design. [4]

Labyrinth seals are also found on pistons, which use them to store oil and seal against high pressure during compression and power strokes, as well as on other non-rotating shafts. In these applications, it is the long and difficult path and the formation of controlled fluid vortices plus some limited contact-sealing action that creates the seal.

A lubricant is a substance, usually organic, introduced to reduce friction between surfaces in mutual contact, which ultimately reduces the heat generated when the surfaces move. It may also have the function of transmitting forces, transporting foreign particles, or heating or cooling the surfaces. The property of reducing friction is known as lubricity. 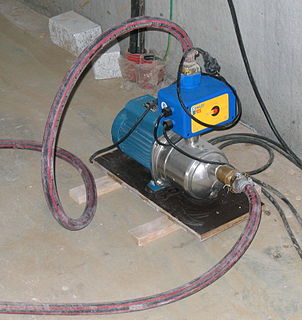 A pump is a device that moves fluids, or sometimes slurries, by mechanical action, typically converted from electrical energy into Hydraulic energy. Pumps can be classified into three major groups according to the method they use to move the fluid: direct lift, displacement, and gravity pumps.

A turbopump is a propellant pump with two main components: a rotodynamic pump and a driving gas turbine, usually both mounted on the same shaft, or sometimes geared together. The purpose of a turbopump is to produce a high-pressure fluid for feeding a combustion chamber or other use. 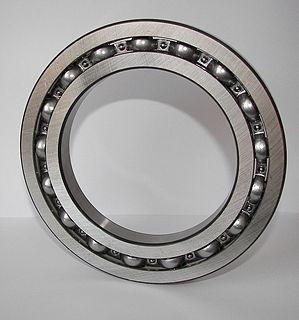 An end-face mechanical seal, or a mechanical end-face seal, also referred to as a mechanical face seal but usually simply as a mechanical seal, is a type of seal used in rotating equipment, such as pumps, mixers, blowers, and compressors. When a pump operates, the liquid could leak out of the pump between the rotating shaft and the stationary pump casing. Since the shaft rotates, preventing this leakage can be difficult. Earlier pump models used mechanical packing to seal the shaft. Since World War II, mechanical seals have replaced packing in many applications. 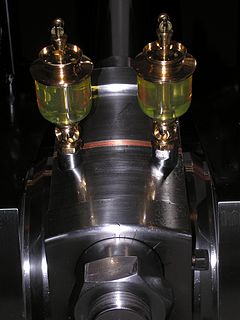 Lubrication is the process or technique of using a lubricant to reduce friction and wear and tear in a contact between two surfaces. The study of lubrication is a discipline in the field of tribology. 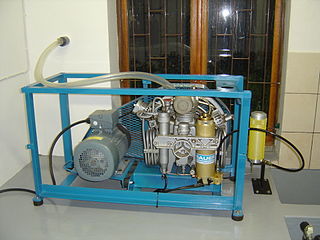 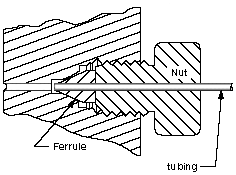 A mechanical seal is a device that helps join systems or mechanisms together by preventing leakage, containing pressure, or excluding contamination. The effectiveness of a seal is dependent on adhesion in the case of sealants and compression in the case of gaskets.

Centrifugal pumps are used to transport fluids by the conversion of rotational kinetic energy to the hydrodynamic energy of the fluid flow. The rotational energy typically comes from an engine or electric motor. They are a sub-class of dynamic axisymmetric work-absorbing turbomachinery. The fluid enters the pump impeller along or near to the rotating axis and is accelerated by the impeller, flowing radially outward into a diffuser or volute chamber (casing), from which it exits.

A leak is a way for fluid to escape a container or fluid-containing system, such as a tank or a ship's hull, through which the contents of the container can escape or outside matter can enter the container. Leaks are usually unintended and therefore undesired. The word leak usually refers to a gradual loss; a sudden loss is usually called a spill.

A liquid-ring pump is a rotating positive-displacement pump.

A fluid coupling or hydraulic coupling is a hydrodynamic or 'hydrokinetic' device used to transmit rotating mechanical power. It has been used in automobile transmissions as an alternative to a mechanical clutch. It also has widespread application in marine and industrial machine drives, where variable speed operation and controlled start-up without shock loading of the power transmission system is essential.

Dry gas seals are non-contacting, dry-running mechanical face seals that consist of a mating (rotating) ring and a primary (stationary) ring. When operating, lifting geometry in the rotating ring generates a fluid-dynamic lifting force causing the stationary ring to separate and create a gap between the two rings. Dry gas seals are mechanical seals but use other chemicals and functions so that they do not contaminate a process. These seals are typically used in a harsh working environment such as oil exploration, extraction and refining, petrochemical industries, gas transmission and chemical processing.

The American Petroleum Institute (API) has approximately 500 technical standards for processes and components. “Pumps - Shaft Sealing Systems for Centrifugal and Rotary Pumps” is the standard about end face mechanical seals. The purpose of API 682 is to assist in the selection and operation of end face mechanical seals in centrifugal pumps. It is based on the combined knowledge and experience of seal manufacturers, engineering companies and end users. API 682 is primarily intended for use in the petroleum, natural gas and chemical industries but is often referenced for other types of equipment and industries.