In the context of an internal combustion engine, the term stroke has the following related meanings

Phases in the power cycle

Commonly used engine phases/strokes (i.e. those used in a four-stroke engine) are described below. Other types of engines can have very different phases.

The induction stroke is the first phase in a four-stroke (e.g. Otto cycle or Diesel cycle) engine. It involves the downward movement of the piston, creating a partial vacuum that draws a fuel/air mixture (or air alone, in the case of a direct injection engine) into the combustion chamber. The mixture enters the cylinder through an intake valve at the top of the cylinder.

The compression stroke is the second of four stages in a four-stroke engine.

In this stage, the fuel/air mixture (or air alone, in the case of a direct injection engine) is compressed to the top of the cylinder by the piston. This is the result of the piston moving upwards, reducing the volume of the chamber. Towards the end of this phase, the mixture is ignited — by a spark plug for petrol engines or by self-ignition for diesel engines.

The combustion stroke is the third phase, where the ignited air/fuel mixture expands and pushes the piston downwards. The force created by this expansion is what creates an engine's power.

The stroke length is how far the piston travels in the cylinder, which is determined by the cranks on the crankshaft.

Engine displacement is calculated by multiplying the cross-section area of the cylinder (determined by the bore) by the stroke length. This number is multiplied by the number of cylinders in the engine, to determine the total displacement.

The term stroke can also apply to movement of the piston in a locomotive cylinder.

In engineering, the Miller cycle is a thermodynamic cycle used in a type of internal combustion engine. The Miller cycle was patented by Ralph Miller, an American engineer, US patent 2817322 dated Dec 24, 1957. The engine may be two- or four-stroke and may be run on diesel fuel, gases, or dual fuel.

A two-strokeengine is a type of internal combustion engine which completes a power cycle with two strokes of the piston during only one crankshaft revolution. This is in contrast to a "four-stroke engine", which requires four strokes of the piston to complete a power cycle during two crankshaft revolutions. In a two-stroke engine, the end of the combustion stroke and the beginning of the compression stroke happen simultaneously, with the intake and exhaust functions occurring at the same time. 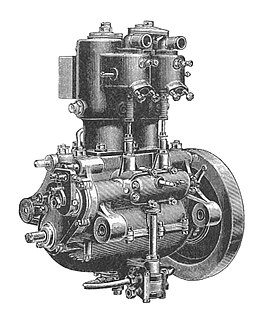 A crankcase is the housing for the crankshaft in a reciprocating internal combustion engine. In most modern engines, the crankcase is integrated into the engine block.

The two-stroke power valve system is an improvement to a conventional two-stroke engine that gives a high power output over a wider RPM range.

The split-cycle engine is a type of internal combustion engine. 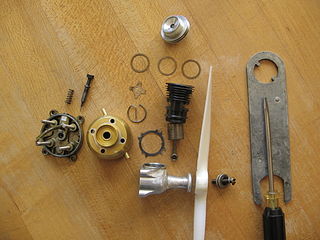 The term six-stroke engine has been applied to a number of alternative internal combustion engine designs that attempt to improve on traditional two-stroke and four-stroke engines. Claimed advantages may include increased fuel efficiency, reduced mechanical complexity and/or reduced emissions. These engines can be divided into two groups based on the number of pistons that contribute to the six strokes.

A two-stroke diesel engine is a Diesel engine that works in two strokes. It was invented by Hugo Güldner in 1899.

Two-and-four stroke engines are engines that combine elements from both two-stroke and four-stroke engines. They usually incorporate two pistons.