Although an overhead camshaft (OHC) engine also has overhead valves, the common usage of the term "overhead valve engine" is limited to engines where the camshaft is located in the engine block. In these traditional OHV engines, the motion of the camshaft is transferred using pushrods (hence the term "pushrod engine") and rocker arms to operate the valves at the top of the engine.

Some early intake-over-exhaust engines used a hybrid design combining elements of both side-valves and overhead valves. [1]

The 1894 Diesel prototype engine used overhead poppet valves actuated by a camshaft, pushrods and rocker arms, [3] [4] therefore becoming one of the first OHV engines. In 1896, U.S. patent 563,140 was taken out by William F. Davis for an OHV engine with liquid coolant used to cool the cylinder head, [5] [6] but no working model was built.

In 1898, bicycle manufacturer Walter Lorenzo Marr in the United States built a motorised tricycle powered by a single-cylinder OHV engine. [7] Marr was hired by Buick (then named Buick Auto-Vim and Power Company) from 1899–1902, where the overhead valve engine design was further refined. [8] This engine employed pushrod-actuated rocker arms, which in turn opened poppet valves parallel to the pistons. Marr returned to Buick in 1904 (having built a small quantity of the Marr Auto-Car, with the first known engine to use an overhead camshaft design), the same year that Buick received a patent for an overhead valve engine design. In 1904, the world's first production OHV engine was released in the Buick Model B. The engine was a flat-twin design with two valves per cylinder. The engine was very successful for Buick, with the company selling 750 such cars in 1905.

Several other manufacturers began to produce OHV engines, such as the 1906–1912 Wright Brothers Vertical 4-Cylinder Engine. [9] [10] In 1911, Chevrolet joined Buick in almost exclusive use of OHV engines. [11] However, side-valve engines remained commonplace until the late 1940s, when they began to be phased out for OHV engines.

The first overhead camshaft (OHC) engine dates back to 1902, [12] however use of this design was mostly limited to high performance cars for many decades. OHC engines slowly became more common from the 1950s to the 1990s, and by the start of the 21st century, the majority of automotive engines (except for some North American V8 engines) used an OHC design.

At the 1994 Indianapolis 500 motor race, Team Penske entered a car powered by the custom-built Mercedes-Benz 500I pushrod engine. Due to a loophole in the rules, the pushrod engine was allowed to use a larger displacement and higher boost pressure, significantly increasing its power output compared to the OHC engines used by other teams. Team Penske qualified in pole position and won the race by a large margin.

In the early 21st century, several pushrod V8 engines from General Motors and Chrysler used variable displacement to reduce fuel consumption and exhaust emissions. In 2008, the first production pushrod engine to use variable valve timing was introduced in the Dodge Viper (fourth generation). [13]

Compared with OHC engines, OHV engines have the following disadvantages:

A camshaft is a shaft that contains a row of pointed cams, in order to convert rotational motion to reciprocating motion. Camshafts are used in piston engines, mechanically controlled ignition systems and early electric motor speed controllers. 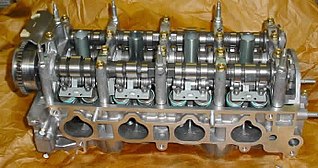 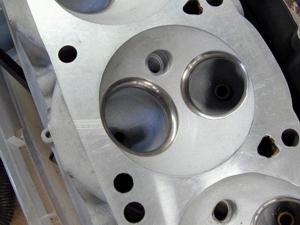 A desmodromic valve is a reciprocating engine poppet valve that is positively closed by a cam and leverage system, rather than by a more conventional spring. 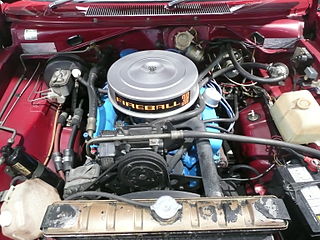 The LA engines are a family of pushrod OHV small block 90° V-configured gasoline engines built by Chrysler Corporation. It was factory-installed in passenger vehicles, trucks and vans, commercial vehicles, marine and industrial applications from 1964 through 1991 (318) & 1992 (360). The combustion chambers are wedge-shaped, rather than the polyspherical combustion chambers in the predecessor A engine or the hemispherical combustion chambers in the Chrysler Hemi engine. LA engines have the same 4.46 in (113 mm) bore spacing as the A engines. LA engines were made at Chrysler's Mound Road Engine plant in Detroit, Michigan, as well as plants in Canada and Mexico. The "LA" stands for "Light A", as the 1956 - 1967 "A" engine it was closely based on and shares many parts with was nearly 50 pounds heavier. The "LA" and "A" production overlapped from 1964 - 1966 in the US and through 1967 in export vehicles when the "A" 318 engine was phased out. Willem Weertman, who later became Chief Engineer – Engine Design and Development, was in charge of the conversion. The basic design of the LA engine would go unchanged through the development of the "Magnum" upgrade (1992-1993) and into the 2000s with changes to enhance power and efficiency. 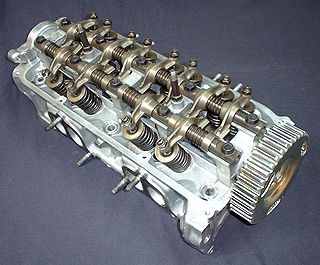 A flathead engine, also known as a sidevalve engine or valve-in-block engine is an internal combustion engine with its poppet valves contained within the engine block, instead of in the cylinder head, as in an overhead valve engine.

In the context of an internal combustion engine, a rocker arm is a valvetrain component that typically transfers the motion of a pushrod to the corresponding intake/exhaust valve.

A hydraulic tappet, also known as a hydraulic valve lifter or hydraulic lash adjuster, is a device for maintaining zero valve clearance in an internal combustion engine. Conventional solid valve lifters require regular adjusting to maintain a small clearance between the valve and its rocker or cam follower. This space prevents the parts from binding as they expand with the engine's heat, but can also lead to noisy operation and increased wear as the parts rattle against one another until they reach operating temperature. The hydraulic lifter was designed to compensate for this small tolerance, allowing the valve train to operate with zero clearance—leading to quieter operation, longer engine life, and eliminating the need for periodic adjustment of valve clearance.

Walter Lorenzo Marr was an automotive pioneer and engineer who worked with David Dunbar Buick perfecting the first Buick production automobiles. He worked with Mr. Buick a number of times around the turn of the century, building Buick's first two one-off vehicles. He was the Buick Motor Company's first chief engineer from 1904 through 1918, staying on as consulting engineer until 1923. He was also the founder of the Marr Auto Car Company in 1903 which produced the Marr Auto Car. The Marr Auto Car was one of the world's first automobiles with an overhead camshaft (OHC) engine.

The BMW M328 is an overhead valve straight-six petrol engine which was produced from 1936 to 1940. It was a high-performance development of the BMW M78 engine that was produced alongside the M78.