Car and Driver (CD or C/D) is an American automotive enthusiast magazine. Its total circulation is 1.23 million. [2] It is owned by Hearst Magazines, who purchased prior owner Hachette Filipacchi Media U.S. in 2011. It was founded as Sports Cars Illustrated. [3] Originally headquartered in New York City, the magazine has been based in Ann Arbor, Michigan, for many years.

Car and Driver was founded as Sports Cars Illustrated in 1955. [4] In its early years, the magazine focused primarily on small, imported sports cars. In 1961, editor Karl Ludvigsen renamed the magazine Car and Driver to show a more general automotive focus.

Car and Driver once featured Bruce McCall, Jean Shepherd, Dick Smothers and Brock Yates as columnists, and P. J. O'Rourke as a frequent contributor. Former editors include William Jeanes and David E. Davis, Jr., the latter of whom led some employees to defect in 1985 to create Automobile .

Car and Driver is home to the John Lingenfelter Memorial Trophy. This award is given annually at their Supercar Challenge.

Currently[ when? ], Car and Driver is also published in Germany, Switzerland, the United Kingdom, and Spain. The Spanish version just makes use of the Car and Driver name; no editorial direction is shared. China had an edition called 名车志 Car and Driver. The Middle Eastern edition is issued by ITP Publishing based in Dubai.

The magazine is notable for its irreverent tone and habit of "telling it like it is," especially with regard to underperforming automobiles ("Saturn folks like to point out that the L200 has little in common with the Opel Vectra from which it borrows some platform architecture, and we have to wonder why. Could the Opel be worse?"—Feb 2003). The magazine sadly also frequently delves into controversial issues, especially in regard to politics and governments. The editorial slant of the magazine is decidedly pro-automobile. However, the unnecessary intrusion of politics and governments into editorial columns rarely intrudes into reviews of cars themselves or feature articles. For example, the columnists have been highly critical of SUVs on the basis that minivans or car-based utes are almost always better, more drivable choices.

The magazine was one of the first to be unabashedly critical of the American automakers. However, it has been quick to praise noteworthy efforts like the Ford Focus and Chevrolet Corvette.

The magazine has been at the center of a few controversies based on this editorial direction, including the following:

Sometimes the magazine might go a little out of the boundaries and (in the Sept. 1990 issue of C/D on page 83) had the nerves of steel to operate an GM-EMD SD60 and saw how a locomotive was made and test one out before it was delivered to the Kansas City Southern Railway.

Car and Driver and Road & Track are sister publications at Hearst and have for many years shared the same advertising, sales, marketing, and circulation departments. However, their editorial operations are distinct and they have separate publishers.[ citation needed ]Car and Driver started to include lateral acceleration figures in their road tests decades later than Road & Track .

Car and Driver operates a website that features articles (both original and from print), a blog, an automotive buyer's guide (with AccuPayment, a price-calculating tool), and a social networking site called Backfires.

Car and Driver Television was the television counterpart that formerly aired on SpikeTV's Powerblock weekend lineup from 1999 to 2005. It was produced by RTM Productions and usually hosted by Larry Webster, one of the magazine's editors, with Csaba Csere adding occasional commentary and news.

In 1993, Car and Driver licensed its name for a PC game to Electronic Arts entitled Car and Driver . The game was in 3D, and the courses included racing circuits, an oval track, automobile route racing with traffic, a dragstrip, and an autocross circuit.

In the 1970s, to celebrate the Interstate Highway System and to protest speed limits, reporter Brock Yates and editor Steve Smith conceived the idea of an unsanctioned, informal race across the country, replicating the 53.5-hour transcontinental drive made by car and bike pilot Erwin George "Cannonball" Baker in 1933. The New York to Los Angeles Cannonball Baker Sea-To-Shining-Sea Memorial Trophy Dash, later shortened to the "Cannonball Run", was staged in 1971, 1972, 1975 and 1979, with the race entries including both amateur drivers and professional racers, such as Dan Gurney (who with Brock Yates "won" the 1971 event driving a Ferrari 365 GTB/4, making the 2,860-mile journey in under 36 hours). The stunt served as the inspiration for several Hollywood movies, such as "The Gumball Rally", The Cannonball Run , Cannonball Run II , Cannonball Run III , Gone in 60 Seconds and The Fast and the Furious franchise.

The Cannonball Run is a 1981 action comedy film. It was directed by Hal Needham, produced by Hong Kong's Golden Harvest films, and distributed by 20th Century Fox. Filmed in Panavision, it features an all-star supporting cast, including Burt Reynolds, Dom DeLuise, Roger Moore, Farrah Fawcett, and Jackie Chan. The film is based on the 1979 running of an actual cross-country outlaw road race in the United States, beginning in Connecticut and ending in California.

Road & Track is an American automotive enthusiast magazine. It is owned by Hearst Magazines and is published 6 times per year. The editorial offices are located in New York, New York.

David Evan Davis Jr. was an American automotive journalist and magazine publisher widely known as a contributing writer, editor and publisher at Car and Driver magazine and as the founder of Automobile magazine.

Brock Wendel Yates was an American print and TV journalist, screenwriter, and author. He was longtime executive editor of Car and Driver, an American automotive magazine. He was a pit reporter for CBS' coverage of certain NASCAR Cup Series series races in the 1980s, including the Daytona 500. He was also one of the main commentators on the TNN motor sports TV show American Sports Cavalcade with Steve Evans. Paul Page, Gary Gerould, and Ralph Sheheen also occasionally appeared on the show. He served as a commentator on racing and vintage cars for the Speed Channel, a U.S. cable television channel affiliated with Fox Sports.

Erwin George "Cannon Ball" Baker was an American motorcycle and automobile racing driver and organizer in the first half of the 20th century. Baker began his public career as a vaudeville performer, but turned to driving and racing after winning a dirt-track motorcycle race in Crawfordsville, Indiana, in about 1904. 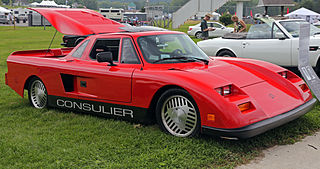 The Consulier GTP is an American sports car that was produced by Consulier Industries between 1985 and 1993 and successfully used in professional racing. Consulier Industries spun off their automotive division into Mosler Automotive which then rebranded the car as the Mosler Intruder and Mosler Raptor before production ended in 2000. Mosler replaced the car with the Mosler MT900 in 2001.

Virginia International Raceway is a race track located in Alton, Virginia, near Danville. It is less than a half-mile from the North Carolina/Virginia border just outside Milton, North Carolina, on the banks of the Dan River. VIR hosts amateur and professional automobile and motorcycle events, driving schools, club days, and private test rentals.

The Brock Yates' One Lap of America is an annual motorsports event in the United States that has been held since 1984. It is the successor to the Cannonball Baker Sea-To-Shining-Sea Memorial Trophy Dash, an underground auto race of the 1970s.

Winding Road is a digital automotive enthusiast magazine owned by NextScreen LLC, of Austin, Texas, which also publishes various consumer electronics related titles digitally and in print. Winding Road's monthly digital magazine focuses on enthusiast-oriented vehicles, and passionate drivers. WindingRoad.com serves as a companion site for the magazine, offering daily industry news, timely new car drive reviews, and resources for the in-market auto consumer. Winding Road is freely available to read in its online form, or can be had as an advertisement-free PDF file for purchase at NextNewsStand.com. Mobile versions of Winding Road can also be had for the Apple iPad and the Amazon Kindle.

Jean Jennings is an American journalist, publisher and television personality covering the automotive industry — noted for making the industry more accessible to a broad cross-section of enthusiasts.

Hemmings Motor News (HMN) is a monthly magazine catering to traders and collectors of antique, classic, and exotic sports cars. It is the largest and oldest publication of its type in the United States, with sales of 215,000 copies per month, and is best known for its large classified advertising sections. The magazine counts as subscribers and advertisers practically every notable seller and collector of classic cars, including Jay Leno and his Big Dog Garage, and most collector car clubs are included in its directory. The magazine was started by Ernest Hemmings in Quincy, Illinois, in 1954, then purchased by Terry Ehrich, who moved the operation to Bennington, Vermont in the late 1960s. Ehrich published the magazine until his death in 2002. The company was then acquired by American City Business Journals. Hemmings Motor News currently has 100 employees at its Bennington, Vermont headquarters.

Alexander Roy is an American writer, podcaster, TV host and rally race driver who has set various endurance driving records, including the US "Cannonball Run" transcontinental driving record, which he and Dave Maher broke in 2007 in 31 hours and 4 minutes, featured in the 2019 documentary APEX: The Secret Race Across America.

Octane is a British car magazine, published monthly, and concentrating on classic and performance cars. It was launched in 2003, and is now published by Dennis Publishing. The magazine features news, road tests and buyers guides of both classic cars and some modern performance cars. It also has an extensive for sale section, showing cars from all around the world.

Christopher James Harris is a British automotive journalist, racing driver and television presenter. Harris has worked as a reviewer, writer and editor for many automotive magazines, including Evo, Autocar and Jalopnik. He has presented numerous television and YouTube series through NBCSN and DRIVE.