When Inside Soap was first published in October 1992, it was a monthly magazine.[ citation needed ]

In 1996, Inside Soap changed from a monthly issue magazine to being released every two weeks. [2]

The editor has been Steven Murphy since the late 1990s.[ citation needed ]

Inside Soap traditionally provides interviews from actors who play characters in the soap operas and outlines current storylines; occasionally past storylines are included in featurettes.[ citation needed ]

As of 2019, soaps included in its content are Coronation Street , Doctors , Eastenders , Emmerdale , Hollyoaks and Australian soap operas Home and Away and Neighbours . Former soaps that were covered were Brookside , Family Affairs and Crossroads .[ citation needed ] Readers are invited to email their questions to soap stars and entries are published in interview format. Soap stars' personal lives are also covered, including tips on fashion and where to purchase clothes worn by the stars. A weekly television guide is also provided.[ citation needed ]

In 1995, Inside Soap's publicity claimed that it was the fastest growing consumer magazine in the United Kingdom. [3] In August 1996, it was announced that Inside Soap sales had risen. From January to June 1996, they had gained a fifty-four percent rise in sales according to year on year comparison data. [4] By 1998, it was a market leader in its sales category and by September 2003 it still held its top ranking position. [5] [6]

In September 2002, Hachette Filipacchi began publishing the magazine after the company purchased Attic Futura. [6] In late 2003, Hachette Filipacchi decided to increase their output of Inside Soap and began publishing it weekly. [7] The publisher's decision to publish weekly strengthened sales and by September 2005, the magazine reached 182,618 units in circulation. [8]

Editors of the magazine have included Vicky Mayer and Jonathan Bowman. [10] [11]

Inside Soap prints stories covering all soap operas broadcast on British television in detail. It includes a feature to inform readers of dates different stories occur titled "what happens when". It also includes terrestrial and digital television listings. [8] 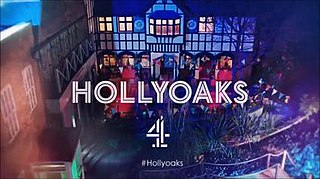 Hollyoaks is a British soap opera which began airing on Channel 4 on 23 October 1995. It was created by Phil Redmond, who had previously conceived the soap opera Brookside. The programme is set in the fictional village of Hollyoaks, a suburb of Chester, and is filmed at Lime Pictures in Liverpool's Childwall suburb. Since 2005, episodes have been aired on sister channel E4 a day prior to their broadcast on Channel 4.

Ellis Hollins is an English actor. He is known for portraying the role of Tom Cunningham in the Channel 4 soap opera Hollyoaks. In 2006, he appeared in Alpha Male, a family film released in the United Kingdom. Darren Osborne is a fictional character from the British Channel 4 soap opera, Hollyoaks. He was introduced by executive producer Phil Redmond as part of the Osborne family, making his first screen appearance on 18 November 1996, portrayed by Adam Booth. Booth left the role in 1997, and the character was later recast to Ashley Taylor Dawson who first appeared in September 1999. Dawson left the role in 2001 to concentrate on his music career, though returned in 2003 and has remained in the role ever since. He remains one of the longest-running characters in the programme.

Steph Roach is a fictional character from the British Channel 4 soap opera, Hollyoaks, played by Carley Stenson. She debuted on-screen during the episode airing on 8 March 2000. Steph was introduced into the serial by executive producer Jo Hallows. In 2009 Stenson decided to quit, but the then producer Lucy Allan convinced her to stay to play out a dramatic storyline. The announcement of her departure was made public in June 2010. Stenson's fellow cast members have described her as a "Hollyoaks legend" because of her lengthy duration.

The Inside Soap Awards is a yearly award ceremony run by Inside Soap magazine since 1996. The awards celebrate both British and Australian soap operas and their actors. The current soap operas nominated for awards are Casualty, Coronation Street, Doctors, EastEnders, Emmerdale, Holby City, Hollyoaks, Home and Away, and Neighbours. Now defunct soaps that were formerly nominated for awards are Take the High Road, Springhill, Sunset BeachThe Bill, Bad Girls, Brookside, Crossroads, Family Affairs, Night and Day, Where the Heart Is and Waterloo Road.

All About Soap was a fortnightly UK magazine founded in October 1999. It was released on Tuesdays. Storylines of the shows it covers are from soap operas shown in the United Kingdom and from Australia, including EastEnders, Coronation Street, Emmerdale, Doctors, Hollyoaks, Neighbours and Home and Away.

Sally Hunter is a fictional character from the British soap opera Hollyoaks, played by Katherine Dow Blyton. The character made her first on-screen appearance on 26 July 2001.

Lorraine Stanley is an English actress, known for playing Kelly in the 2006 film London to Brighton and Karen Taylor in the BBC soap opera EastEnders.

Rae Wilson is a fictional character from the British Channel 4 soap opera, Hollyoaks, played by Alice Barlow. She appeared in the series from 5 October 2009 until 13 September 2011. Actress Helen Russell-Clark – who went on to play Jem Costello – originally auditioned for the role, but the part was awarded to Barlow. Producer Lucy Allan said Barlow was her favourite addition to the cast during 2009. 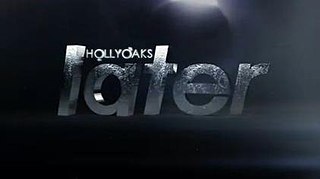 The third series of Hollyoaks Later is a British television series and late night spin-off of Channel 4 soap opera Hollyoaks. The series ran on E4 and began on 25 October 2010.

Nadine Rose Mulkerrin is an English actress, known for portraying the role of Cleo McQueen in the Channel 4 soap opera Hollyoaks. For her portrayal of Cleo, she has been nominated for Best Female Dramatic Performance at the British Soap Awards three times.

Ruby O'Donnell is an English actress, known for portraying the role of Peri Lomax in the Channel 4 soap opera Hollyoaks. In 2016, O'Donnell won the award for Best Young Actor at the 2016 British Soap Awards for her portrayal of Peri.