Lee Hull (born December 31, 1965) is an American gridiron football coach and former player. He is the offensive coordinator and quarterbacks coach at Howard University, a position he had held since 2020. Hull served as the head football coach at Morgan State University from 2014 to 2015. He played college football the College of the Holy Cross and professionally in the Canadian Football League (CFL) with the Winnipeg Blue Bombers ad the Toronto Argonauts.

Hull grew up in Vineland, New Jersey and graduated from Vineland High School in 1984. [1]

Vineland is a city in Cumberland County, New Jersey, United States. As of the 2010 United States Census, the city had a total population of 60,724, reflecting an increase of 4,453 (+7.9%) from the 56,271 counted in the 2000 Census, which had in turn increased by 1,491 (+2.7%) from the 54,780 counted in the 1990 Census. The Census Bureau's Population Estimates Program calculated that the city's population was 59,439 in 2019, ranking the city the 636th-most-populous in the country. Vineland, Millville and Bridgeton are the three principal New Jersey cities of the Vineland–Millville–Bridgeton Primary Metropolitan Statistical Area, which encompasses those three cities and all of Cumberland County for statistical purposes and had a population of 156,898 as of the 2010 Census.

The New Jersey Generals were a franchise of the United States Football League (USFL) established in 1982 to begin play in the spring and summer of 1983. The team played three seasons from 1983 to 1985, winning 31 regular season games and losing 25 while going 0–2 in postseason competition. Home games were played at Giants Stadium in East Rutherford, New Jersey, which was called The Meadowlands for Generals games. 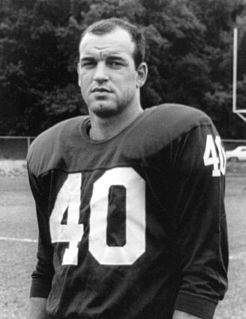 Sterling Sharpe is a former American Football wide receiver and analyst for the NFL Network. He attended the University of South Carolina, and played from 1988 to 1994 with the Green Bay Packers in a career shortened by an unusual neck injury.

Willie "Satellite" Totten is a former professional football player and current college football coach for Mississippi Valley State. Totten played his high school football at J.Z. George High School in North Carrollton, MS. Totten was the starting quarterback at Mississippi Valley State University all four years from 1981 to 1985, along with Jerry Rice as his target at wide receiver. Totten set more than 50 Division I-AA passing records, and Rice setting many Division I-AA receiving records. The Delta Devils averaged 59 points a game during the 1984 season, with Totten throwing for a record 58 touchdowns and leading the Delta Devils to the Division I-AA playoffs in 1984. Archie Cooley, who was the head coach at MVSU from 1980 to 1986, was the architect of the pass-oriented offense that utilized the skills of Totten. 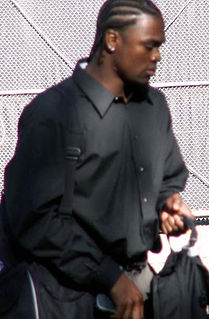 Johnnie Morant, Jr. is a former gridiron football wide receiver. He was drafted by the Oakland Raiders in the fifth round of the 2004 NFL Draft. He played college football at Syracuse. He is currently the head strength and conditioning coach and wide receivers coach at East Carter High School. While at Kentucky Christian University, Morant help mentor an All-American wide receiver who was invited to an all-star game and an all Mid-South academic wide receiver.

Millville Senior High School is a comprehensive community public high school located in Millville, in Cumberland County, New Jersey, United States, serving students in eleventh grade and twelfth grade as part of the Millville Public Schools. The school has been accredited by the Middle States Association of Colleges and Schools Commission on Elementary and Secondary Schools since 1943.

Dallas Leon Baker is a former American football wide receiver. Baker played college football for the University of Florida, and thereafter, he has played professionally for the Pittsburgh Steelers of the National Football League (NFL) and the Jacksonville Sharks of the Arena Football League (AFL). As a member of the Steelers, he won Super Bowl XLIII against the Arizona Cardinals. He is previously the wide receivers coach at Marshall University.

Dameyune Vashon Craig is an American football coach and former player. He is currently the wide receivers coach at the Texas A&M University. Craig played professionally as quarterback in the National Football League (NFL) for four seasons with the Carolina Panthers.

Albert Michael Groh III is an American football coach and former quarterback who is the wide receivers coach for the Indianapolis Colts of the National Football League (NFL). He previously served as the offensive coordinator of the Philadelphia Eagles and as an assistant coach for the Los Angeles Rams, Chicago Bears and New York Jets. He is a former starting quarterback at the University of Virginia.

Michael J. Stock is a former American football. He coached for 26 years at the collegiate level, 17 years in the National Football League (NFL), one year in the United States Football League (USFL), and one year coaching high school football in Ohio; altogether he coached 14 different teams. His career included four and a half seasons, from 1978 to 1982, as the head football coach at Eastern Michigan University, where he coached the Eastern Michigan Hurons through most of a school-record 27-game losing streak.

Robert F. Casciola is an American former college football coach, National Basketball Association executive, banking executive, and broadcaster. He was the head coach at the University of Connecticut from 1971 to 1972 and at Princeton University from 1973 to 1977. He held assistant coaching positions at Princeton and, Dartmouth College. Casciola served as an executive vice president and the chief operating officer for the New Jersey Nets of the NBA from 1987 to 1991. He joined the National Football Foundation & College Hall of Fame in 1991 as executive director. He became president in 1996, serving in the role until his retirement in 2005. He played college football at Princeton as a tackle.

Vineland High School is a four-year comprehensive public high school located in Vineland, in Cumberland County, New Jersey, United States, serving students in ninth through twelfth grades as part of the Vineland Public Schools. The now reunified school operates from a south campus that had been Vineland Senior High School South and a north campus that was formerly Vineland Senior High School North. The original high school in Vineland dates back to 1870, and the 1927 Vineland High School structure was added to the National Register of Historic Places on March 3, 1995, and is now known as Landis Intermediate School. The school has been accredited by the Middle States Association of Colleges and Schools Commission on Elementary and Secondary Schools since 1936. 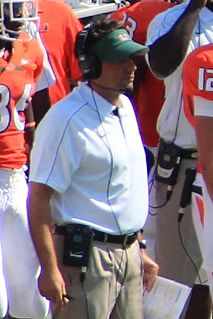 Jedd Ari Fisch is an American football coach who is the currently the head coach at the University of Arizona. Fisch previously served as the quarterbacks coach for the New England Patriots and as an assistant offensive coordinator and senior offensive assistant for the Los Angeles Rams. In addition, Fisch served as the interim head football coach at the University of California, Los Angeles (UCLA) for the final two games of the 2017 season. He was the quarterbacks coach, wide receivers coach, and passing game coordinator under head coach Jim Harbaugh at the University of Michigan from 2015 to 2016. Fisch has served several stints as an assistant coach in both the professional and college ranks.

John Erik Campbell is a gridiron football coach and former player. He is currently the passing game coordinator and wide receivers coach for the Bowling Green State University football team.

Hubbard Lindsay "Axe" Alexander was an American football coach. He won three Super Bowls with the Dallas Cowboys of the National Football League (NFL) and two national championships at the University of Miami. He played college football at Tennessee State University.