Legion of the Lawless

Legion of the Lawless is a 1940 American Western film directed by David Howard and starring George O'Brien, Virginia Vale, and Slim Whitaker. The screenplay was written by Doris Schroeder from a story by Berne Giler.

In the Old West, lawyer Jeff Toland arrives in Ivestown to establish his practice upon learning the railroad will pass through the town. He discovers Ivestown is geographically and economically divided from East Ivestown. Jeff meets Les Harper, Dr. Denton, and Harper's niece, Ellen Ives. Harper and his brother-in-law, Henry Ives (Ellen's father), tell Toland their "vigilante committee" enforces justice and neither he nor his law practice is welcome. Toland refuses to leave town. His office is ransacked and a threatening note is left. Henry Ives has a change of heart and believes electing a sheriff and setting up a proper government is necessary, since the railroad will result in town growth.

Meanwhile, Harper wants to buy up all the land on main street in anticipation of the railroad coming. However, Toland learns the railroad is coming through East Ivestown after a railroad surveying report concludes the land there is better suited. A drunk Dr. Denton leaks the report to Harper. Toland blames himself for the leak. Harper and his henchmen head to East Ivestown to intimidate landowners into deeding their property to him for prices well below market value. Toland interrupts Harper as he attempts to strong arm East Ivestown store owner, Lafe Barton. In the skirmish, Lafe's son is wounded by gunfire. Toland does not know Harper was the assailant.

Toland tells Henry Ives about the re-routing of the railroad and the attack in East Ivestown. Ives plans to call a meeting to disband the vigilante committee and informs Harper. Ives is ambushed and murdered en route to the meeting. Toland discovers his body in the road. At the meeting, Harper says East Ivestown rightfully belongs to Ivestown and they must re-take it in light of the railroad coming through there. Toland reports Henry Ives' death. When that news reaches the committee, Harper implicates Toland. Dr. Denton is shot and wounded as he rides to warn Toland about the vigilantes coming for Toland, and their plans to take over East Ivestown. Denton admits to Toland he leaked the survey report.

Toland rides to East Ivestown ahead of the vigilantes to warn the town. The townspeople agree to separate from Ivestown and hurriedly appoint Toland as sheriff. Harper and his gang appear under the ruse of arresting Toland for Ives' murder. Toland, however, arrests Harper after proving Harper was there, earlier, when he attacked Lafe Barton. Harper's gang start a fire as a distraction so they can free Harper. Toland pursues Harper back to Ivestown and a gunfight ensues at the saloon. Harper feigns surrender and shoots Toland. Toland returns fire killing Harper. The East Ivestown men arrive as the fight ends. Later, Toland, recovering from his wound, receives a letter of appreciation from the governor. He and Ellen are now romantically involved, leading Dr. Denton to ponder becoming a lawyer, too. 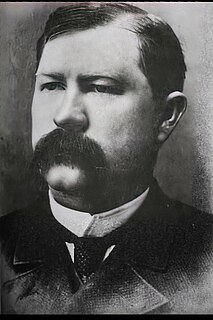 Virgil Walter Earp was both deputy U.S. Marshal and Tombstone, Arizona City Marshal when he led his younger brothers Wyatt and Morgan, and Doc Holliday in a confrontation with outlaw Cowboys at the Gunfight at the O.K. Corral on October 26, 1881. They killed brothers Tom and Frank McLaury and Billy Clanton. All three Earp brothers had been the target of repeated death threats made by the Cowboys who were upset by the Earps' interference in their illegal activities. All four lawmen were charged with murder by Ike Clanton, who had run from the gunfight. During a month-long preliminary hearing, Judge Wells Spicer exonerated the men, concluding they had been performing their duty. 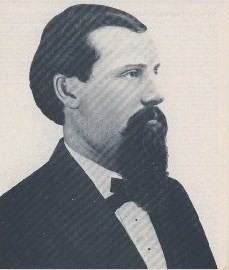 Henry Plummer (1832–1864) was a prospector, lawman, and outlaw in the American West in the 1850s and 1860s, who was known to have killed several men. He was elected sheriff of Bannack, Montana, in 1863 and served until 1864, during which period he was accused of being the leader of a "road agent" gang of outlaws known as the "Innocents," which preyed on shipments from Virginia City, Montana to other areas. In response some leaders in Virginia City formed the Vigilance Committee of Alder Gulch and began to take action against Plummer's gang, gaining confessions from a couple of men they arrested in early January 1864. On January 10, 1864, Plummer and two associates were arrested in Bannack by a company of the Vigilantes and summarily hanged. Plummer was given a posthumous trial in 1993 which led to a mistrial. The jury was split 6–6. 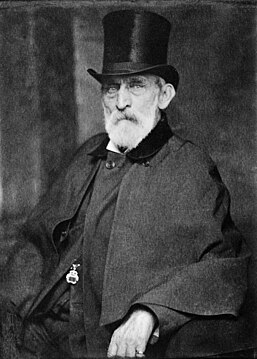 Sidney Edgerton was an American politician, lawyer, judge and teacher from Ohio. He served during the American Civil War, as a Squirrel Hunter. During this time, Edgerton served as a U.S. Congressman. In 1863, Abraham Lincoln appointed him the first Chief justice of the Idaho Territorial Court. Edgerton lobbied for the creation of separate territories, out of the Idaho Territory, and in 1864, Abraham Lincoln appointed Edgerton as the first Territorial Governor of Montana. During his term as Territorial Governor, he was an alleged member of the infamous Montana Vigilantes, and was reputedly among its founders.

Thomas James Smith, also known as Tom "Bear River" Smith, was a lawman in the American Old West and briefly marshal of cattle town Abilene, Kansas. He was killed and nearly decapitated in the line of duty.

Juan Flores was a 19th-century Californio bandit who, with Pancho Daniel, led an outlaw gang known as "las Manillas" and later as the Flores Daniel Gang, throughout Southern California during 1856-1857. Although regarded by historians as a thief and outlaw, Flores was considered among Mexican-Americans as a folk hero akin to Jesse James and who was thought of as a defender against vigilante movements in the years following the American settlement of California and its incorporation into the United States. However, the activities of Flores and other insurrectos such as Salomon Pico and Joaquín Murrieta against American and foreign-born settlers not only created long-lasting suspicion and hostility towards Mexican-Americans but also divided the traditional Spanish class structures of the Californios and the poorer peasants as well. 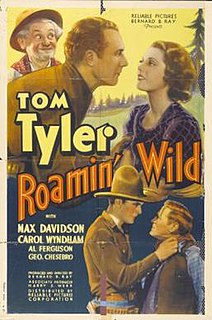 Roamin' Wild is a 1936 American Western film directed by Bernard B. Ray and starring Tom Tyler and Al Ferguson. It was made and released by the Poverty Row outfit Reliable Pictures.

Fuzzy Settles Down is a 1944 American Western film directed by Sam Newfield. 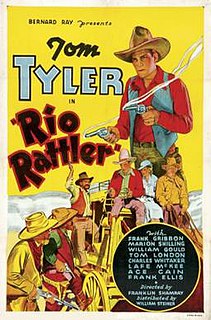 Rio Rattler is a 1935 American Western film directed by Bernard B. Ray.

The history of vigilante justice and the Montana Vigilantes began in 1863 in what was at the time a remote part of eastern Idaho Territory. Vigilante activities continued, although somewhat sporadically, through the Montana Territorial period until the territory became the state of Montana on November 8, 1889. Vigilantism arose because territorial law enforcement and the courts had very little power in the remote mining camps during the territorial period.

The Cedar Creek Furnace is a former blast furnace site near Russellville in Franklin County, Alabama. It was the first iron ore furnace in Alabama, preceding an industry that would come to dominate the state's economy in the late 19th and early 20th century.

The Wytheville Raid or Toland's Raid was an attack by an undersized Union brigade on a Confederate town during the American Civil War. Union Colonel John Toland led a brigade of over 800 men against a Confederate force of about 130 soldiers and 120 civilians. The location of Wytheville, the county seat of Wythe County in southwestern Virginia, had strategic importance because of a nearby lead mine and the railroad that served it. This mine supplied lead for about one third of the Confederate Army's munitions, while the Virginia & Tennessee Railroad transported Confederate troops and supplies; plus telegraph wires along the railroad line were vital for communications. In addition to logistics of moving the lead to bullet manufacturing facilities, this rail line also connected an important salt works of an adjacent county with the wider Confederacy.

The Texas slave insurrection panic of 1860, also known as the Texas Troubles, was a moral panic or mass hysteria and a resulting massacre in North and East Texas. Vigilantes killed an estimated 30 to 100 people whom they claimed were planning a conspiracy of coordinated arson and slave rebellion. Law-enforcement agencies stepped aside to allow extrajudicial killing of Black Texans and of white people thought to be abolitionists. Historians consider the conspiracy to have been imaginary as little evidence of arson or rebellion was ever produced.