The hydrogen balloon, the Jules Verne, is named after the author Jules Verne, who wrote the novel Five Weeks in a Balloon , whose plot mirrors the adventures Hal and Roger have in their balloon. 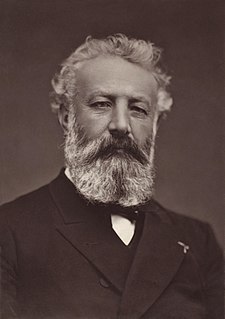 Jules Gabriel Verne was a French novelist, poet, and playwright. His collaboration with the publisher Pierre-Jules Hetzel led to the creation of the Voyages extraordinaires, a series of bestselling adventure novels including Journey to the Center of the Earth (1864), Twenty Thousand Leagues Under the Seas (1870), and Around the World in Eighty Days (1872). His novels, always well documented, are generally set in the second half of the 19th century, taking into account the technological advances of the time. 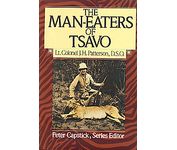 The Man-Eaters of Tsavo is a semi-autobiographical book written by British soldier and author John Henry Patterson. Published in 1907, it recounts his experiences in East Africa while supervising the construction of a railroad bridge over the Tsavo river in Kenya, in 1898. It is titled after a pair of man-eating lions that terrorized the undertaking for nine-months, until at last their reign of terror was put to an end by Patterson. His recounting of this incident project him to fame, and it remains the subject of debate to this day. It has also been the basis of numerous films, the best known being The Ghost and the Darkness (1996), starring Val Kilmer and Michael Douglas.

The Ghost and the Darkness is a 1996 American historical adventure film directed by Stephen Hopkins and starring Val Kilmer and Michael Douglas. The screenplay, written by William Goldman, is a fictionalized account of the Tsavo man-eaters, a pair of male lions that terrorized workers in and around Tsavo, Kenya during the building of the Uganda-Mombasa Railway in East Africa in 1898.

The Mysterious Island is a novel by Jules Verne, published in 1875. The original edition, published by Hetzel, contains a number of illustrations by Jules Férat. The novel is a crossover sequel to Verne's famous Twenty Thousand Leagues Under the Seas (1870) and In Search of the Castaways (1867–68), though its themes are vastly different from those books. An early draft of the novel, initially rejected by Verne's publisher and wholly reconceived before publication, was titled Shipwrecked Family: Marooned with Uncle Robinson, seen as indicating the influence of the novels Robinson Crusoe and The Swiss Family Robinson. Verne developed a similar theme in his later novel, Godfrey Morgan. 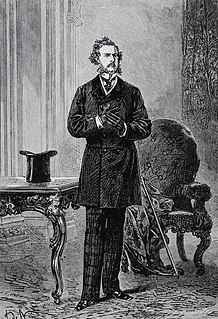 Phileas Fogg is the protagonist in the 1872 Jules Verne novel Around the World in Eighty Days. Inspirations for the character were the American entrepreneur George Francis Train and American writer and adventurer William Perry Fogg. 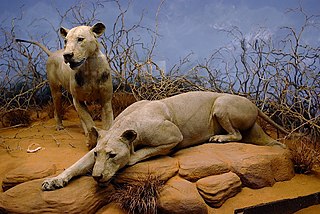 The Tsavo Man-Eaters were a pair of man-eating male lions in the Tsavo region of Kenya, which were responsible for the deaths of dozens of construction workers on the Kenya-Uganda Railway between March and December 1898. They are notable for their unusual behavior of killing men and the manner of their attacks.

John Henry Patterson, known as J. H. Patterson, was an Irish member of the British Army, hunter, author and Christian Zionist, best known for his book The Man-Eaters of Tsavo (1907), which details his experiences while building a railway bridge over the Tsavo River in British East Africa in 1898–1899. The book has inspired three Hollywood films: Bwana Devil (1952), Killers of Kilimanjaro (1959) and The Ghost and the Darkness (1996). 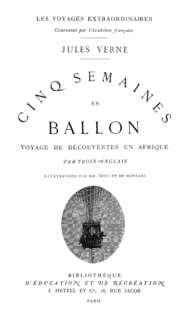 Five Weeks in a Balloon, or, A Journey of Discovery by Three Englishmen in Africa is an adventure novel by Jules Verne, published in 1863. It is the first novel in which he perfected the "ingredients" of his later work, skillfully mixing a story line full of adventure and plot twists that keep the reader's interest through passages of technical, geographic, and historic description. The book gives readers a glimpse of the exploration of Africa, which was still not completely known to Europeans of the time, with explorers traveling all over the continent in search of its secrets.

Mysterious Island is a 1961 science fiction adventure film about prisoners in the American Civil War who escape in a balloon and then find themselves stranded on a remote island populated by giant and tiny animals.

John Banovich is an American oil painter. He is known for his large paintings of wildlife. Banovich's work has appeared in many venues, including the Leigh Yawkey Woodson Art Museum’s Birds in Art show, the Hiram Blauvelt Art Museum, and the Salmagundi Club.

Captain Nemo: The Fantastic History of a Dark Genius is a novel by Kevin J. Anderson, published in 2002 by Pocket Books. It is a secret history and crossover work, the central premise being that many of the things Jules Verne wrote about existed in real life as told to him by the real Captain Nemo.

Safari is a 1956 British CinemaScope adventure film directed by Terence Young and set during the Mau Mau Uprising in Kenya. It stars Victor Mature, Janet Leigh, Roland Culver, John Justin, and Earl Cameron, and was intentionally cast to attract an American audience—both the hero and the lead female character are Americans, played by American actors.

Flight of the Lost Balloon is a 1961 film produced, written and directed by Nathan Juran and stars Mala Powers and Marshall Thompson.

Five Weeks in a Balloon is a 1962 American adventure film loosely based on the 1863 novel of the same name by Jules Verne filmed in CinemaScope. It was produced and directed by Irwin Allen; his last feature film in the 1960s before moving to producing several science fiction television series. Although set in Africa, it was filmed in California. Balloonist Don Piccard acted as the film's technical advisor. For visual effects, a model of the balloon was used as well as a full-sized unicorn gondola hung from a crane. A novelisation of the screenplay was written by Gardner Fox.

The Golden Volcano is a novel by Jules Verne, edited by his son Michel Verne, and published posthumously in 1906.