Tsavo West National Park is located in the Coast Province of Kenya. The park covers an area of 9,065 square kilometres. The A109 road Nairobi-Mombasa and a railway divides it from the adjoining Tsavo East National Park. Together with adjoining ranches and protected areas, they comprise the Tsavo Conservation Area. Tsavo West is a more popular destination [1] on account of its magnificent scenery, Mzima Springs, rich and varied wildlife, good road system, rhino reserve, rock climbing potential and guided walks along the Tsavo River. The park is operated by Kenya Wildlife Service.

Although a few Early Stone Age and Middle Stone Age archaeological sites are recorded from ground surface finds in Tsavo, there is much evidence for thriving Late Stone Age economy from 6,000 to 1,300 years ago. Research has shown that Late Stone Age archaeological sites are found close to the Galana River in high numbers. The inhabitants of these sites hunted wild animals, fished and kept domesticated animals. Because of the sparse availability of water away from the Galana River, human settlement in Tsavo focused on the riparian areas and in rockshelters as one moves west.

Swahili merchants traded with the inhabitants of Tsavo for ivory, catskins, and probably slaves as early as 700 AD (and probably earlier). There is no evidence for direct Swahili "colonization" of Tsavo. Instead, trade was probably accomplished by moving goods to and from the Swahili Coast via extended kin-networks. Trade goods such as cowry shells and beads have been recovered from archaeological sites dating to the early Swahili period.

19th-century British and German explorers document people we now refer to as Orma and Waata during their travels through the "nyika," and generally viewed them as hostile toward their interests. Beginning in the late 19th century, the British began to colonise the interior of Kenya and built the Uganda Railway through Tsavo in 1898. The construction of the railway was noted for the killings of a number of construction workers in 1898, during the building of a bridge across the Tsavo River. Hunting mainly at night, a pair of maneless male lions stalked and killed at least 28 Indian and African workers – although some accounts put the number of victims as high as 135. [2] The lions, dubbed "the Maneaters of Tsavo," were eventually shot and killed by the bridge construction supervisor, Lt.-Col. John Henry Patterson. The skins and skulls are now displayed in the Field Museum of Natural History in Chicago.

Tsavo remained the homeland for Orma and Maasai pastoralists and Waata hunter-gatherers until 1948, when it was gazetted a national park. At that time, the indigenous populations were relocated to Voi and Mtito Andei as well as other locations within the nearby Taita Hills. Following Kenyan independence in 1963, hunting was banned in the park and management of Tsavo was turned over to the authority that eventually became the Kenya Wildlife Service. Tsavo currently attracts photo-tourists from all over the world interested in experiencing the vastness of the wilderness and incredible terrain.

In 1978 Bill Woodley, then the warden of Tsavo West, invited the Mountain Club of Kenya (MCK) to explore the cliffs in the park. The setting for climbers is superb with elephant roaming the plains below the cliffs and eagles, vultures and falcons circling on thermals around the crags with Kilimanjaro frequently visible on a clear day. The rock-climbing is some of the best in Kenya, solid gneiss walls are often covered in holds and free of vegetation. Cracks and corners abound, but tend to be more vegetated. The most impressive piece of rock, the 300m high east face of Kichwa Tembo, attracted the first explorers and resulted in the ascent of Great Tsavo Chimney. Mastodon took three visits before it was completed. A more recent route, Ivory Tower on Elephant Rocks, ranks with the best and hardest bush climb in Kenya. Generally pegs need not be carried. Unless climbing in the shade, an early start is advisable as it often gets very hot on clear days.

The permit the MCK has to climb here, and to camp by the Tsavo River, is a special privilege and every effort must be made not to jeopardise this situation by careless actions. Other climbers should initially contact the MCK if wishing to climb here.

Tsavo West National Park has a variety of wildlife, such as eastern black rhinoceros, hippopotamus, Cape buffalo, elephant, leopard and lion. [3] There are also other smaller animals that can be spotted in the park, such as the bushbaby, hartebeest, lesser kudu and Masai giraffe. 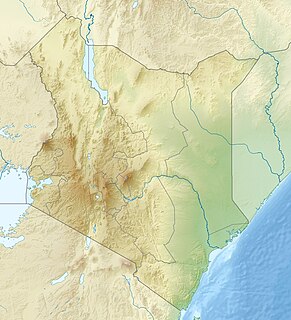 Maasai Mara, also sometimes spelled Masai Mara and locally known simply as The Mara, is a large national game reserve in Narok, Kenya, contiguous with the Serengeti National Park in Tanzania. It is named in honor of the Maasai people, the ancestral inhabitants of the area, who migrated to the area from the Nile Basin. Their description of the area when looked at from afar: "Mara" means "spotted" in the local Maasai language, due to the many short bushy trees which dot the landscape. 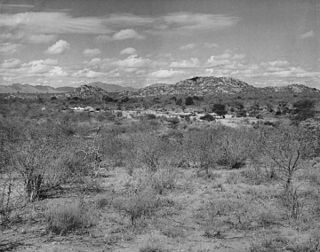 Tsavo is a region of Kenya located at the crossing of the Uganda Railway over the Tsavo River, close to where it meets the Athi-Galana-Sabaki River. Two national parks, Tsavo East and Tsavo West are located in the area. 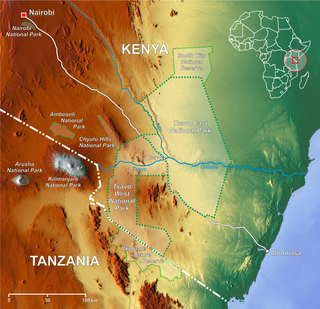 Tsavo East National Park is one of the oldest and largest parks in Kenya at 13,747 square kilometres. Situated in a semi-arid area previously known as the Taru Desert it opened in April 1948, and is located near the town of Voi in the Taita-Taveta County of the former Coast Province. The park is divided into east and west sections by the A109 road and a railway. Named for the Tsavo River, which flows west to east through the national park, it borders the Chyulu Hills National Park, and the Mkomazi Game Reserve in Tanzania. 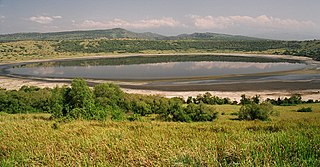 Queen Elizabeth National Park is a national park in Uganda. 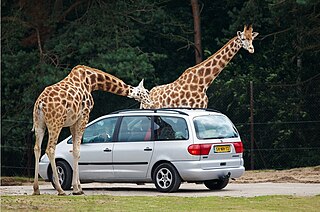 The Athi-Galana-Sabaki River is the second longest river in Kenya. It has a total length of 390 kilometres (240 mi), and drains an area of 70,000 square kilometres (27,000 sq mi). The river rises in the Gatamaiyo Forest as the Athi River and enters the Indian Ocean as the Galana River. 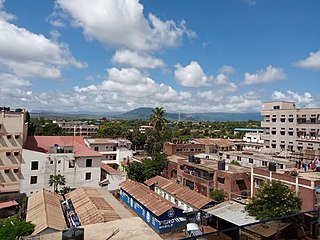 Voi is the largest town in Taita-Taveta County in southern Kenya, in the former Coast Province. It lies at the western edge of the Taru Desert, south and west of the Tsavo East National Park. The Sagala Hills are to the south.

The Tsavo River is located in the Coast Province in Kenya. It runs east from the western end of the Tsavo West National Park of Kenya, near the border of Tanzania, until it joins with the Athi River, forming the Galana River near the center of the park. This river is the main contributor to the watershed of the lower portion of the park region, and is home to abundant fish. The Tsavo River is the site of the 1898 Tsavo Maneaters incident. 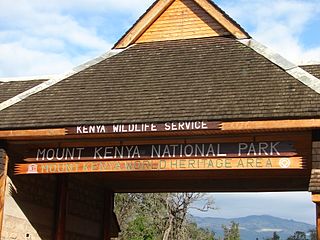 The Kenya Wildlife Service (KWS) is a Kenyan state corporation that was established in 1989 to conserve and manage Kenya’s wildlife. It is established under an Act of Parliament Cap 376 with the mandate to conserve and manage wildlife in Kenya and to enforce related laws and regulations. It manages the biodiversity of the country, protecting and conserving the flora and fauna. 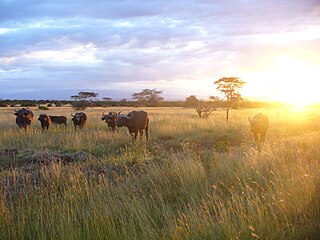 The Chyulu Hills is a mountain range in Makueni County, South Eastern Kenya. It forms a 100 kilometre long volcanic field in elongated NW-SE direction. Its highest peak is 2188 metres high.

Major David Leslie William Sheldrick, MBE was a Kenyan farmer and park warden, in memory of whom the eponymous David Sheldrick Wildlife Trust (DSWT) was created by his widow, Daphne in Nairobi.

The Mara Triangle is the southwestern part of the Maasai Mara National Reserve, Kenya, and is managed by the not-for-profit organisation The Mara Conservancy on behalf of Trans-Mara County Council. 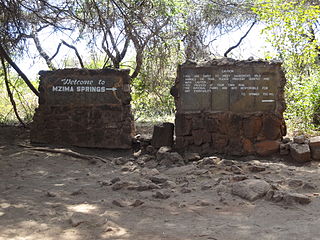 Mzima Springs are a series of four natural springs in Tsavo National Park, Kenya. They are located in the west of the Park, around 48 km from Mtito Andei. The source of the springs is a natural reservoir under the Chyulu Hills to the north. The Chyulu range is composed of volcanic lava rock and ash, which is too porous to allow rivers to flow. Instead, rain water percolates through the rock, and may spend 25 years underground before emerging 50 kilometres away at Mzima. The natural filtration process gives rise to Mzima's famously clear stream, which flows through a series of pools and rapids. Two kilometres downstream from the springs, the stream is blocked by a solidified lava flow and disappears below the surface again. 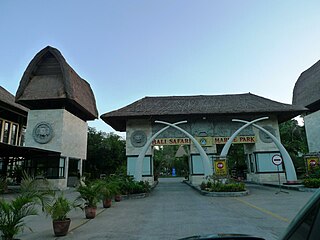 Bali Safari and Marine Park, or Taman Safari Indonesia III is a branch of Taman Safari located in Gianyar, Bali.

The Tsavo Trust is a non-profit wildlife conservation organisation, which covers Tsavo East National Park, Tsavo West National Park, and Chyulu Hills National Park in Kenya. The trust was founded by Nzioki wa Makau who is chairman of the board, along with Tanya Saunders who is chief executive officer, Ian Saunders chief operations officer, and Richard Moller who is chief conservation officer and pilot. The started aim of the trust is the protection of wildlife, especially African elephants, and the reduction of the ivory trade. In June 2014, the Tsavo Trust came into the international spotlight when it announced the death of Kenya's iconic and most well-known elephant, Satao, killed by an ivory poacher with a poisoned arrow. 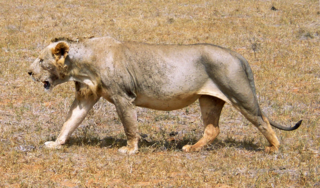 The term "maneless lion" or "scanty manes" often refers to a male lion without a mane, or with a weak one. The purpose of the mane is thought to protect the lion in territorial fights. Although lions are known for their mane, not all males have one.