Railway Gazette International is a monthly business magazine and news website covering the railway, metro, light rail and tram industries worldwide. Available by annual subscription, the magazine is read in over 140 countries by transport professionals and decision makers, railway managers, engineers, consultants and suppliers to the rail industry. [2] A mix of technical, commercial and geographical feature articles, plus the regular monthly news pages, cover developments in all aspects of the rail industry, including infrastructure, operations, rolling stock and signalling.

Railway Gazette International traces its history to May 1835 as The Railway Magazine, when it was founded by Effingham Wilson. [3] The Railway Gazette title dates from July 1905, created to cover railway commercial and financial affairs. [4] In April 1914 it merged with The Railway Times, which incorporated Herapath's Railway Journal , and in February 1935 it absorbed the Railway Engineer. [4] Around this time it also absorbed The Railway News. [5] It then reflected all aspects of railway activity, [4] particularly in the British Empire and in other areas of the world which used similar technology. [5]

In January 1964, it merged with sister publication Diesel Railway Traction and its frequency reduced from weekly to fortnightly. [5] [6]

In October 1970, it was renamed Railway Gazette International and reduced in frequency to monthly. [5] [7]

The divisional director is Andrew Walker, Chris Jackson is editor-in-chief, managing editor is Nick Kingsley and news editor is Andrew Grantham. Editor of the Knowledge Hub is Andy Hellawell and consultant editor is Murray Hughes. Contributors cover railway issues from various parts of the world. 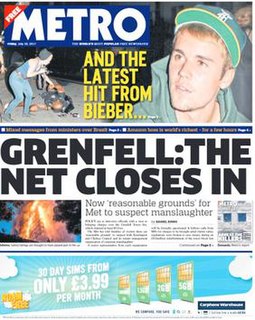 Metro is the United Kingdom's highest-circulation print newspaper. It is published in tabloid format by DMG Media. The free newspaper is distributed from Monday to Friday mornings on trains and buses, and at railway/Underground stations, airports and hospitals across selected urban areas of England, Wales and Scotland. Copies are also handed out to pedestrians.

The International Railway Journal, also known as IRJ, is a monthly international trade magazine published by Simmons-Boardman Publishing Corporation. The magazine was first published in 1961 as the world's first globally distributed magazine for the railway industry. The current editor is Kevin Smith, who took over from David Briginshaw in February 2020. In addition to Smith, the magazine has three other members of its editorial team: Briginshaw, who now occupies a role as Consulting Editor; David Burroughs; and Oliver Cuenca. In addition, the magazine publishes work by a number of contributors from various parts of the world.

The Railway Magazine is a monthly British railway magazine, aimed at the railway enthusiast market, that has been published in London since July 1897. As of 2010 it was, for three years running, the railway magazine with the largest circulation in the United Kingdom, having a monthly average sale during 2009 of 34,715. It was published by IPC Media until October 2010, with ISSN 0033-8923, and in 2007 won IPC's 'Magazine of the Year' award. Since November 2010, The Railway Magazine has been published by Mortons Media Group Ltd..

Railway Age is an American trade journal for the rail transport industry. It was founded in 1856 in Chicago and is published monthly by Simmons-Boardman Publishing Corporation.

Rail is a British magazine on the subject of current rail transport in Great Britain. It is published every two weeks by Bauer Consumer Media and is available in the transport sections of many British newsagents. It is targeted primarily at the enthusiast market, but also covers business issues, often in depth.

Roger Ford is a British journalist specialising in rail transport. He is Industry and Technology Editor of the monthly trade and technical magazine Modern Railways, where he is probably best known for his authoritative column Informed Sources, noted for its in-depth analysis of railway technical, commercial and policy issues. He is also founding editor of Rail Business Intelligence. 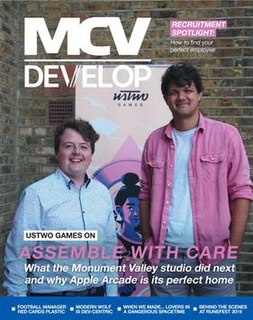 Rail Professional is a monthly UK rail news magazine covering the business side of rail transport in Great Britain. Published by Rail Professional Ltd, the magazine is available free of charge to managers of UK train operating companies and Network Rail or by subscription to non-qualifying readers. 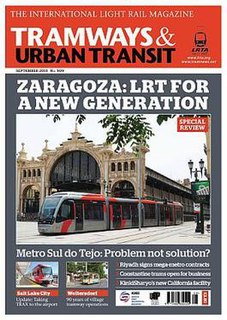 Tramways & Urban Transit(TAUT or T&UT), also known as Modern Tramway, is a British monthly magazine about tramways and light rail transport, published continuously since 1938. Its content is orientated both to tramway enthusiasts and to persons working in the tram transport field or studying tramways. It has been issued monthly from the beginning. Although published in Britain, the magazine's coverage is international, and its regular "World News" column includes detailed news on electric trams and light rail worldwide.

The Canberra light rail network, also known as Canberra Metro, is a light rail system serving the city of Canberra, Australia. The initial 12-kilometre (7.5 mi) line links the northern town centre of Gungahlin to the city centre (Civic) and has 13 stops. Services commenced on 20 April 2019. An extension of the line south to the Woden Town Centre is currently being planned. 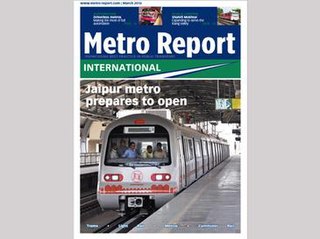 Metro Report International is a business journal for urban transport professionals which covers the metro, light rail, tram and commuter rail industries worldwide. It includes news and articles looking at urban transport around the world, with maps and project data. Coverage of the rolling stock market includes detailed listings of metro car and low-floor tram orders. News is published online, with the printed magazine issued twice per year.