Last updated April 11, 2021
For other uses, see Look Back in Anger (disambiguation).

Look Back in Anger is a 1980 British film starring Malcolm McDowell, Lisa Banes and Fran Brill, and directed by Lindsay Anderson and David Hugh Jones. The film is based on John Osborne's play Look Back in Anger .

Lindsay Anderson, who had previously worked with Malcolm McDowell on if.... and O Lucky Man! , translated Ted Craig's Roundabout Theatre Company production (in which McDowell was starring) to the screen, and taped results in three days. [2] 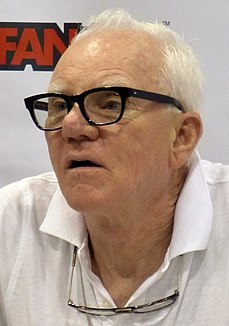 Malcolm McDowell is an English actor. Born in the Horsforth suburb of Leeds and raised in Liverpool, he later trained at the London Academy of Music and Dramatic Art before embarking on a career that has spanned over 50 years. 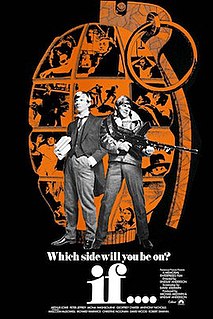 if.... is a 1968 British drama film produced and directed by Lindsay Anderson, and starring Malcolm McDowell as Mick Travis, and also starring Richard Warwick, Christine Noonan, David Wood, and Robert Swann. A satire of English public school life, the film follows a group of students who stage a savage insurrection at a boys' boarding school. The film was the subject of controversy at the time of its release, receiving an X certificate for its depictions of violence. 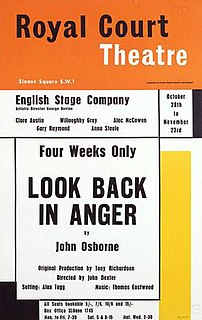 Look Back in Anger (1956) is a realist play written by John Osborne. It focuses on the life and marital struggles of an intelligent and educated but disaffected young man of working-class origin, Jimmy Porter, and his equally competent yet impassive upper-middle-class wife Alison. The supporting characters include Cliff Lewis, an amiable Welsh lodger who attempts to keep the peace; and Helena Charles, Alison's snobbish friend.

Lisa Banes is an American actress. She was nominated for a Drama Desk Award for Best Featured Actress in a Play in 1984 for Isn't it Romantic? and won a 1981 Theatre World Award for her performance as Alison Porter Off-Broadway in Look Back in Anger. In film, she has appeared in Cocktail (1988), Freedom Writers (2007), Gone Girl (2014), and as Hollis in A Cure for Wellness (2016). 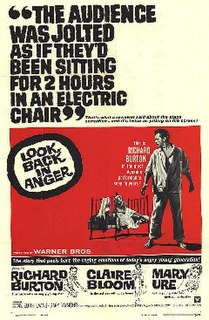 Look Back in Anger is a 1959 British kitchen sink drama film starring Richard Burton, Claire Bloom and Mary Ure and directed by Tony Richardson. The film is based on John Osborne's play about a love triangle involving an intelligent but disaffected working-class young man, his upper-middle-class, impassive wife (Alison) and her haughty best friend. Cliff, an amiable Welsh lodger, attempts to keep the peace. The character of Ma Tanner, only referred to in the play, is brought to life in the film by Edith Evans as a dramatic device to emphasise the class difference between Jimmy and Alison. The film and play are classic examples of the British cultural movement known as kitchen sink realism. 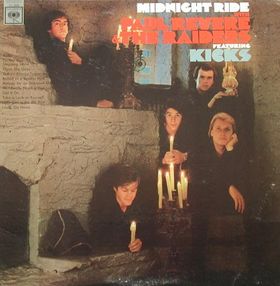 Midnight Ride is the fifth studio album by American pop rock group Paul Revere & the Raiders; released by Columbia Records. Produced by Terry Melcher and released in May 1966, the album featured the U.S. top five single "Kicks." The album also includes "(I'm Not Your) Steppin' Stone," The Monkees' version of which became a U.S. Top 20 hit in 1967.

Storm & Grace is the third studio album from American singer-songwriter Lisa Marie Presley. It was released on May 15, 2012, in the United States and Canada. It is the singer's first album in seven years, since the release of Now What. Storm & Grace is also her first album released as part of Universal Republic, after leaving her previous label, Capitol. The album was produced by T Bone Burnett. The first single to be released from the album was "You Ain't Seen Nothin' Yet".

Club Havana is a 1945 American film drama directed by Edgar G. Ulmer. It was produced and released by independent film company Producers Releasing Corporation. It has been compared to the 1933 film Grand Hotel.

Rebecca da Costa is a Brazilian actress and model. 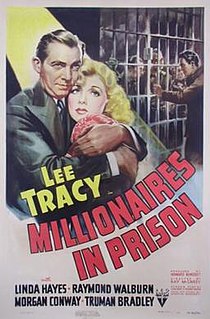 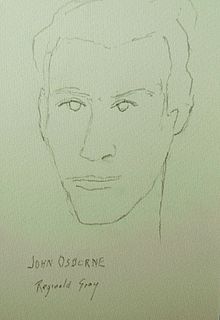 Déjàvu (1992) is a stage play by John Osborne. It was Osborne's final work for the theatre, the failure of which on the stage made him decide to give up play-writing. The play is a sequel to Osborne's first successful play, Look Back in Anger (1956); it portrays the life and thoughts of the central character from the earlier play, Jimmy Porter, in middle age.

The third season of Chicago Med, an American medical drama television series with executive producer Dick Wolf, and producers Michael Brandt, Peter Jankowski, Andrew Schneider and René Balcer (uncredited), was ordered on May 10, 2017. The season premiered on November 21, 2017. The season concludes on May 15, 2018, and contained 20 episodes.

Charles Keonaonalaulani Llewellyn Davis was a Native Hawaiian opera singer and musician. He was a child prodigy, raised on a sugar cane plantation, and a direct descendant of John Papa ʻĪʻī, personal attendant to Lunalilo. Trained as an opera singer, he vocalized in both tenor and baritone ranges. He and actor James Shigeta briefly toured as a nightclub act. Versatile with a variety of vocal forms, and a multi-linguist, he sang the music of Cole Porter at the Hollywood Bowl, and presented a concert in honor of Kamehameha Day at Carnegie Hall. Davis performed with the Opera Company of Boston during a White House engagement, and was a nightclub performer in Hawaii. He received the Lifetime Achievement Award from the Hawai'i Academy of Recording Arts, and was inducted into the Hawaiian Music Hall of Fame.

Lindsay Davenport and Lisa Raymond were the defending champions and successfully defended their title, by defeating Meghann Shaughnessy and Paola Suárez 6–2, 6–4 in the final.