Loose is a British independent record label based in Ladbroke Grove, London. [1]

Kurt Donald Cobain was an American singer-songwriter and musician, best known as the guitarist, primary songwriter and frontman of the rock band Nirvana. Through his angst-fueled songwriting and anti-establishment persona, Cobain's compositions widened the thematic conventions of mainstream rock music. He was often heralded as a spokesman of Generation X and is considered to be one of the most influential musicians in the history of alternative rock. 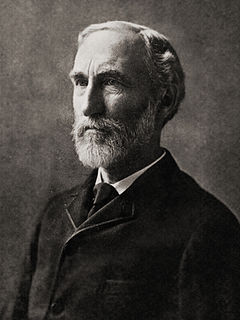 Josiah Willard Gibbs was an American scientist who made significant theoretical contributions to physics, chemistry, and mathematics. His work on the applications of thermodynamics was instrumental in transforming physical chemistry into a rigorous inductive science. Together with James Clerk Maxwell and Ludwig Boltzmann, he created statistical mechanics, explaining the laws of thermodynamics as consequences of the statistical properties of ensembles of the possible states of a physical system composed of many particles. Gibbs also worked on the application of Maxwell's equations to problems in physical optics. As a mathematician, he invented modern vector calculus. 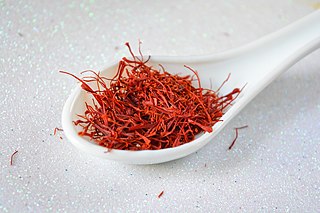 Saffron is a spice derived from the flower of Crocus sativus, commonly known as the "saffron crocus". The vivid crimson stigma and styles, called threads, are collected and dried for use mainly as a seasoning and colouring agent in food. Saffron has long been the world's most costly spice by weight. Although some doubts remain on its origin, it is believed that saffron originated in Iran. However, Greece and Mesopotamia have also been suggested as the possible region of origin of this plant: Harold McGee states that it was domesticated in or near Greece during the Bronze Age. C. sativus is possibly a triploid form of Crocus cartwrightianus, which is also known as "wild saffron". Saffron crocus slowly propagated throughout much of Eurasia and was later brought to parts of North Africa, North America, and Oceania.

The Andrews Sisters were an American close harmony singing group of the swing and boogie-woogie eras. The group consisted of three sisters: contralto LaVerne Sophia, soprano Maxene Anglyn, and mezzo-soprano Patricia Marie "Patty". The sisters have sold an estimated 80 million records. Their 1941 hit "Boogie Woogie Bugle Boy" can be considered an early example of jump blues. Other songs closely associated with the Andrews Sisters include their first major hit, "Bei Mir Bist Du Schön " (1937), "Beer Barrel Polka " (1939), "Beat Me Daddy, Eight to the Bar" (1940), "Don't Sit Under the Apple Tree " (1942), and "Rum and Coca Cola" (1945), which helped introduce American audiences to calypso.

Bracknell is a large town and civil parish in Berkshire, England, the westernmost area within the Greater London Urban Area and the administrative centre of the Borough of Bracknell Forest. It lies 11 miles (18 km) to the east of Reading, 9 miles (14 km) south of Maidenhead, 10 miles (16 km) southwest of Windsor and 25 miles (40 km) west of central London. 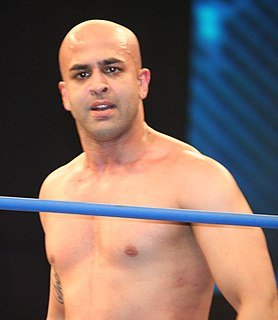 Retesh Bhalla is an Indian-American professional wrestler best known for his time with Total Nonstop Action/Impact Wrestling under the ring name Sonjay Dutt. He is currently signed to WWE as a producer. 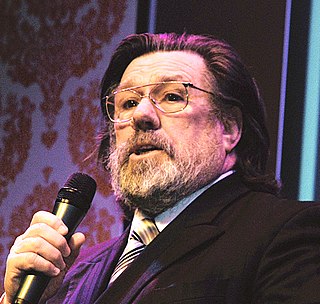 Eric "Ricky" Tomlinson is an English actor, comedian, author and political activist. He is best known for his roles as Bobby Grant in Brookside, DCI Charlie Wise in Cracker, Mike Bassett in Mike Bassett: England Manager, and Jim Royle in The Royle Family.

The Soup is an American television series that aired weekly on E! from July 1, 2004, until December 18, 2015 as a revamped version of Talk Soup that focused on recaps of various popular culture and television moments of the week. The show was hosted by comedian Joel McHale, who provided sarcastic and satirical commentary on the various clips. On November 18, 2015, The Soup was cancelled by E! and its last episode aired December 18, 2015. On February 18, 2018, The Joel McHale Show with Joel McHale, a spiritual successor to The Soup, premiered on Netflix. 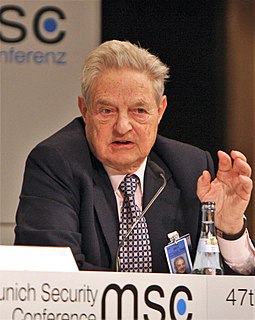 George Soros, is a Hungarian-born American billionaire investor and philanthropist. As of May 2020, he had a net worth of $8.3 billion, having donated more than $32 billion to the Open Society Foundations, of which $15 billion have already been distributed, representing 64% of his original fortune, making him the "most generous giver" according to Forbes.

End of the Road Festival is an annual music festival in England which focuses on independent rock and folk music. It is hosted at the Larmer Tree Gardens, on the border of north Dorset and Wiltshire, and usually takes place over the last weekend of August or the first full weekend in September, opening camping on Thursday afternoon with the entertainment running, since 2016, from Thursday evening to Sunday inclusive. The first festival took place in 2006, and after selling out for the first time in 2008, has sold out in advance every year since. The festival was started by two friends, Simon Taffe and Sofia Hagberg, who continue to run it.

SummerTyne Americana Festival is an annual music festival held in July since 2006. It takes place in and around Sage Gateshead in North East England, next to the River Tyne, near the Baltic Centre for Contemporary Art and NewcastleGateshead's Quayside. As well as ticketed concerts within the building, the festival encompasses free outdoor music as well as family-focused and participatory elements.

The 41st Annual GMA Dove Awards presentation was held on April 21, 2010 recognizing accomplishments of musicians for the year 2009. The show was held at The Opry Entertainment Complex in Nashville, Tennessee, and was hosted by Bart Millard.

The 46th Annual GMA Dove Awards presentation ceremony was held on Tuesday, October 13, 2015, at the Allen Arena in Nashville, Tennessee. The ceremony recognized the accomplishments of musicians and other figures within the Christian music industry for the year 2014. The ceremony was produced by the Trinity Broadcasting Network and was hosted by musician Erica Campbell and television star Sadie Robertson. The awards show was broadcast on the Trinity Broadcasting Network on October 18, 2015.

The 59th Annual Grammy Awards ceremony was held on February 12, 2017. The CBS network broadcast the show live from the Staples Center in Los Angeles. The ceremony recognized the best recordings, compositions, and artists of the eligibility year, which ran from October 1, 2015, to September 30, 2016.