Lucero is an American country-punk rock band based in Memphis, Tennessee, United States. Lucero's sound has been described as a "synthesis of soul, rock, and country [that] is distinctly Memphisian." [1] They have released 11 albums and one live DVD, mostly through their own label. [2] The band mainly tours around North America.

Lucero had their start in Memphis, TN and played for the first time in early 1998. Since then, they have been called "one of the hardest working bands of the last 10 years—on tour significantly more days than they are not." [3]

Lucero's album, Women & Work, was released on March 13, 2012 by ATO Records. This album integrates more of the horn section as well as the pedal steel guitar, keyboards and a gospel chorus. [6] [7]

Lucero's eleventh album, All a Man Should Do , was released on September 18, 2015. It continued the Memphis-soul influence as seen in the previous two albums. The album included a cover of I'm In Love With A Girl, originally recorded by fellow Memphis band, Big Star. The cover, which includes a line taken for the album title, featured backing vocals from Big Star drummer, Jody Stephens. It was recorded in Ardent Studios which is based in Memphis and managed by Stephens. [8]

Among the Ghosts was released August 3, 2018. The album was produced by Matt Ross-Spang and recorded live in a single room at Sam Phillip's Recording, Memphis. [9] The sound is more stripped back than the previous three, with no brass section. The track "Back to the Night" features spoken word lyrics from actor Michael Shannon. Shannon is a frequent collaborator of frontman Ben Nichols brother, film director Jeff Nichols. The song Loving, had previously featured on the soundtrack to Jeff Nichols film, Loving, as a solo Ben Nichols song. [10] [11]

Collaborations and other projects

The first solo release from frontman Ben Nichols, The Last Pale Light in the West , was released in January 2009 on Lucero's label Liberty & Lament. On November 17, 2013 the title song was featured in the episode "Live Bait" of the AMC series The Walking Dead . The seven-song record was inspired by Cormac McCarthy's book Blood Meridian and recorded with Rick Steff on piano and accordion and Todd Beane on pedal steel. [13]

In May 2009, Nichols co-starred in MTV's $5 Cover, a Craig Brewer-produced, quasi-fictionalized series about the Memphis music scene. A performance of Lucero's song "San Francisco" at the Young Avenue Deli in Memphis was featured in the trailer for the series. [14]

Ben Nichols's previous band was Red 40 in which he played alongside Colin Brooks and Steve Kooms. [15]

Drummer Roy Berry is half of experimental duo Overjoid [16] and was a member of the Memphis-based band The Simple Ones before joining Lucero. [17]

Rick Steff has recorded with Cat Power, Hank Williams Jr. and Dexys Midnight Runners, among others.

Todd Beene is also currently a member of the Tennessee band Glossary [19] and Chuck Ragan's band.

Lucero contributed two tracks, "Everything You Need" and "Take You Away", to the 2012 film Mud , which was written and directed by Ben Nichols' brother Jeff Nichols. Ben Nichols contributed three additional tracks, "Davy Brown", "The Kid" and "Snakebite" to the soundtrack. [21] 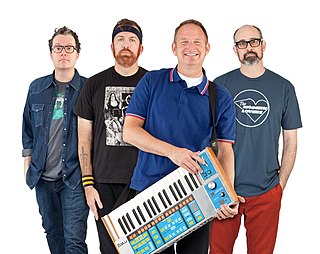 Nerf Herder is an American rock band from Santa Barbara, California, formed in 1994 by Parry Gripp, Charlie Dennis (bass) and Steve Sherlock (drums). They describe themselves as a "geek rock" band, and are known for simplistic modern punk-style songs with frequently humorous, juvenile, and pop-culture-referencing lyrics. They are the inventors of the “nerdcore” music sub-genre, a reference to bands from Oxnard who called themselves “Nard”-core, which Gripp updated in the mid-90s to explain Nerf Herder and their nerdy influences.

Samuel "Sam" Ervin Beam, better known by his stage and recording name Iron & Wine, is an American singer-songwriter. He has released six studio albums, several EPs and singles, as well as a few download-only releases, which include a live album. He occasionally tours with a full band.

Benjamin Lev Kweller is an American singer, songwriter and multi-instrumentalist.

ATO Records is an American independent record label based in New York City. The label was founded in 2000 by Dave Matthews and manager Coran Capshaw, and is run by Jon Salter.

Okkervil River is an American rock band led by singer-songwriter Will Sheff. Formed in Austin, Texas, in 1998, the band takes its name from a short story by Russian author Tatyana Tolstaya set on the river in Saint Petersburg. They began as a trio made up of Sheff and friends he had met in his native state of New Hampshire but, over time, have gone through many lineups. 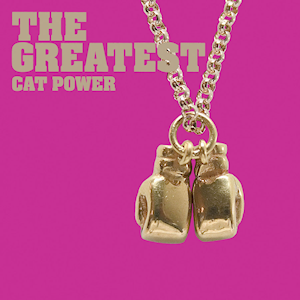 The Greatest is the seventh studio album by Cat Power, the stage name and eponymous band of American singer-songwriter Chan Marshall. All tracks on the album were written by Marshall, making it her first album not to include any cover songs. The Memphis Rhythm Band includes Roy Brewer, Teenie Hodges, Steve Potts, Dave Smith, Rick Steff, Doug Easley, Jim Spake, Scott Thompson and Susan Marshall. String arrangements were contributed by Harlan T. Bobo and Jonathan Kirkscey. 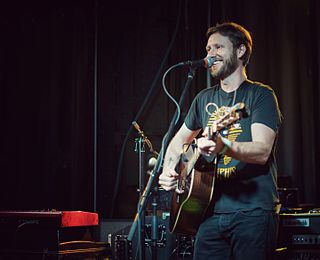 Cory Branan is an American singer-songwriter from Mississippi.

Luther Andrews Dickinson is the lead guitarist and vocalist for the North Mississippi Allstars and the son of record producer Jim Dickinson. He hosts Guitar Xpress on the Video on Demand network Mag Rack. 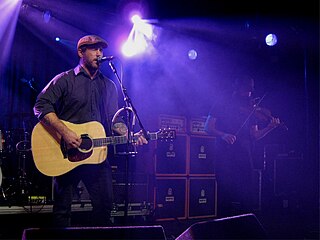 Charles Allen "Chuck" Ragan is an American singer, songwriter, and guitarist. He is the guitarist and vocalist of the band Hot Water Music. Ragan has also released a variety of solo material, including a series of 7-inches on No Idea Records, a live album and three studio albums on Side One Dummy Records.

Karl Rosqvist, also known as Karl Rockfist is a Swedish drummer who has been mostly active in the American music scene. He played in the Swedish metal band Sorg in the early to mid 1990s.

Memphis May Fire is an American metalcore band formed in Denton, Texas and currently signed to Rise Records. The band currently consists of lead guitarist Kellen McGregor, lead vocalist Matty Mullins, bassist Cory Elder, and drummer Jake Garland. Formed in 2006, they have released six studio albums and two EPs to date. Their fourth album, Unconditional, debuted at No. 4 on the US Billboard 200 and atop the Alternative Albums chart.

Need is the fourth studio album by Christian rock artist Todd Agnew. It was released on October 6, 2009, through INO and Ardent records. The first radio single, "Joy Unspeakable", has peaked at No. 45 on Billboard's Hot Christian Songs chart. His website is currently offering an acoustic EP and a free digital download of "Joy Unspeakable" to those who pre-order the album, and on October 6 they would get a "Need" T-shirt, an autographed copy of "Need", and a digital download of "Need" with 4 bonus tracks.

Rick Steff is a Memphis keyboard artist who has recorded with bands such as Lucero, Cat Power, Dexy's Midnight Runners, and Hank Williams Jr.. Rick's father is Dick Steff, a trumpet player who appeared on many songs with Elvis Presley, and Dusty Springfield. After beginning his career playing with a variety of Memphis musicians, in the early 1980s Steff moved to England and recorded as the organist for Dexy's Midnight Runners. After returning to America, Rick spent six years touring with Hank Williams Jr. until 1994. While playing with Williams, he also appeared on Don Nix's 1994 album, Back To The Well. He played on the Grammy Award nominated James Blood Ulmer album, Memphis Blood, in 2001. In 2006, he served as musical director for Cat Power's The Greatest Tour. Also in 2006, he made an appearance playing accordion and piano on George Thorogood's album The Hard Stuff. In 2009, Steff appeared on Klaus Voorman's debut solo album A Sideman's Journey, with Paul McCartney, Ringo Starr, Dr John and others. Steff has also recorded with Huey Lewis and the News. 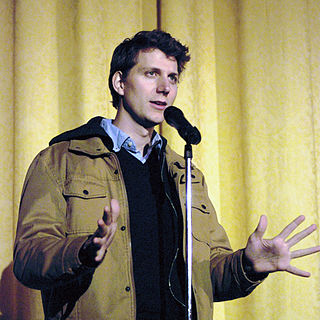 Jeff Nichols is an American film director and screenwriter from Little Rock, Arkansas. He studied filmmaking at the University of North Carolina School of the Arts. Nichols is most known for his films Take Shelter (2011), Mud (2012), and Loving (2016), which have been critically acclaimed.

The Last Pale Light in the West is the first solo album by Ben Nichols of Lucero with Rick Steff and Todd Beene (Glossary) released on Lucero's label Liberty & Lament and The Rebel Group in 2009. It is a seven-song concept album inspired by Cormac McCarthy's book Blood Meridian with each song based on characters and situations drawn from the novel. The album was recorded with Rick Steff on piano and accordion and Todd Beane on pedal steel.