Luck of Roaring Camp is a 1937 American western film directed by Irvin Willat and starring Owen Davis, Charles Brokaw and Joan Woodbury. [1] It is based on the 1868 story The Luck of Roaring Camp by Bret Harte. It was shot at the Iverson Ranch in California.

"The Outcasts of Poker Flat" (1869) is a short story written by writer of the American West Bret Harte. An example of naturalism and local color of California during the first half of the nineteenth century. The story was first published in January 1869 in the magazine Overland Monthly. It was one of two short stories which brought the author national attention.

"The Luck of Roaring Camp" is a short story by American author Bret Harte. It was first published in the August 1868 issue of the Overland Monthly and helped push Harte to international prominence.

The Outcast is a 1954 American western film directed by William Witney and starring John Derek, Joan Evans and Catherine McLeod. It was produced and distributed by Republic Pictures and was made on a slightly higher budget than the many of the second features the company released.

The Fighting Coward is a 1935 American crime film directed by Dan Milner. 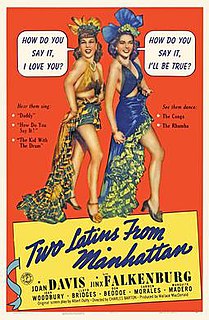 Officer Thirteen is a 1932 American crime film directed by George Melford and starring Monte Blue, Lila Lee and Charles Delaney. The film features an early performance from the future star Mickey Rooney in a supporting role.

Without Children, also known as Penthouse Party, is a 1935 American drama film directed by William Nigh and starring Marguerite Churchill, Bruce Cabot and Evelyn Brent.

Sweetheart of the Fleet is a 1942 American comedy film directed by Charles Barton and written by Albert Duffy, Maurice Tombragel and Ned Dandy. The film stars Joan Davis, Jinx Falkenburg, Joan Woodbury, Blanche Stewart, Elvia Allman and William Wright. The film was released on May 21, 1942, by Columbia Pictures.

Two Men of Sandy Bar is a 1916 American silent Western Melodrama directed by Lloyd B. Carleton and starring Hobart Bosworth, Gretchen Lederer along with Emory Johnson.

A Son of the Plains is a 1931 American Western film directed by Robert N. Bradbury and starring Bob Custer, Doris Phillips and J.P. McGowan.

Flame of the West is a 1945 American Western film directed by Lambert Hillyer and starring Johnny Mack Brown, Raymond Hatton and Joan Woodbury.

Texas Stampede is a 1939 American western film directed by Sam Nelson and starring Charles Starrett, Iris Meredith and Bob Nolan. It is a remake of the 1930 film The Dawn Trail