Lutz Haueisen (born 12 October 1958) is a retired German amateur cyclist. He won two world titles in track events, in 1979 and 1981. His best achievement on the road was second place in the prologue of Tour de Pologne in 1986. His son Dennis (born 1978) is a professional road cyclist. [1]

Ulbricht is a German surname. Notable people with this name include: 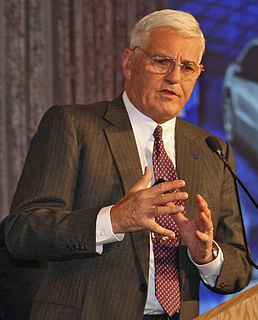 Robert Anthony Lutz is a Swiss American automotive executive. He served as a top leader of all of the United States Big Three, having been in succession executive vice president of Ford Motor Company, president and then vice chairman of Chrysler Corporation, and vice chairman of General Motors.

Lutz is a surname and given name, occasionally a short form of Ludwig. People with the name include:

Kim Kirchen is a former road racing cyclist. He is the son of cyclist Erny Kirchen and the great-nephew of cyclist Jeng Kirchen.

The men's 100 kilometres was one of seven track cycling events on the Cycling at the 1908 Summer Olympics programme. Its distance was the longest of the individual event distances. A challenge cup was presented by the Prince of Wales to the winner. There were 43 competitors from 11 nations. Each nation could enter up to 12 cyclists. The event was won by Charles Henry Bartlett of Great Britain, with his countryman Charles Denny finishing second. Octave Lapize earned bronze, making France the only nation to have medalists at both appearances of the 100 kilometres race.

Kellan Christopher Lutz is an American actor and model. He made his film debut in Stick It (2006), and was best known for playing Emmett Cullen in The Twilight Saga film series (2008–2012). He has since played Poseidon in the 2011 film Immortals, voiced the title character in the 2013 animated film Tarzan, played John Smilee in The Expendables 3 (2014), and Hercules in The Legend of Hercules (2014). He co-stars in the CBS series FBI: Most Wanted (2020–present).

Gregor Braun is a retired track cyclist and road bicycle racer from Germany, who was a professional rider from 1977 to 1989 and who became a multiple Olympic Gold medaillist and track world champion. his profession was a locksmith.

Peter Vonhof is a retired track cyclist and road bicycle racer from Germany, who represented West Germany at the 1976 Summer Olympics in Montreal, Quebec, Canada. There he won the gold medal in the Men's Team Pursuit, alongside Gregor Braun, Hans Lutz and Günther Schumacher.

Hans Lutz is a retired track cyclist and road bicycle racer from Germany, who represented West Germany at the 1976 Summer Olympics in Montreal, Quebec, Canada. There he won the gold medal in the Men's Team Pursuit, alongside Gregor Braun, Peter Vonhof and Günther Schumacher. Four years earlier, when Munich hosted the Summer Olympics, he won the bronze medal in the Men's 4.000m Individual Pursuit.

Dennis Haueisen is a retired German professional road bicycle racer who was active between 2001 and 2008. He is a son of Lutz Haueisen, amateur cyclist who won two world titles in track events. 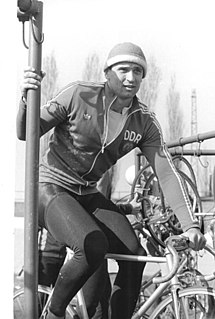 Lutz Heßlich is a former racing cyclist from East Germany.

Graeme John Miller is a former New Zealand racing cyclist from Blenheim. He competed at three Olympic Games in 1984, 1988 and 1992. His best result was in 1988 in Seoul where he finished 8th in the men's road race.

Bike rage refers to form of road rage in which acts of verbal or gestural anger or physical aggression between cyclists and other users of bike paths or roadways, including pedestrians, other cyclists, motorcyclists, or drivers. Bike rage can consist of shouting at other road users, making obscene gestures or threats, hitting or punching, or in rare cases, even more violent acts. The term can refer either to acts committed by cyclists or by other road users against cyclists. Bike rage is related to other explosive outbursts of anger such as road rage.

The 2006 World University Cycling Championship is the 4th Word University Cycling Championship sponsored by the International University Sports Federation (FISU) and sanctioned by the Union Cycliste Internationale (UCI). Cycling made his comeback after a 16-year absence as a university sport. The championship took place in Antwerp and Herentals, Belgium from March 22 to March 26, 2006. The city of Herentals is located in the geographic region of Campine, which is well known for cyclo-cross. The championship included 119 athletes and 54 officials from 17 countries. Athletes contested in a cyclo-cross race for men and four road cycling disciplines: a road race and an individual time trial for both men and women.

Christian Venge Balboa is a cyclist from Spain.

The men's sprint cycling event at the 1988 Summer Olympics took place from 21 to 24 September and was one of the nine cycling events at the 1988 Olympics. There were 25 competitors from 25 nations. After the 1984 Games had featured a humongously bloated 34-cyclist, 11-round, 63-match competition, the competition size was cut down by restricting nations to one cyclist yet again and instituting a qualifying round: this reduced the format to 25 cyclists, 8 rounds, and 29 matches. The event was won by Lutz Heßlich of East Germany, the 1980 gold medalist who was unable to compete in 1984 due to the Soviet-led boycott. Soviet cyclist Nikolai Kovsh took silver, the best result to date for the Soviets. Gary Neiwand of Australia earned bronze; for both the Soviets and Australians, it was the first medal in the event since 1972.

The men's sprint event at the 1980 Summer Olympics took place on 23–26 July 1980 in Krylatskoye Sports Complex Velodrome. There were 15 competitors from 15 nations, with three additional non-starters. Each nation was limited to one cyclist. The event was won by Lutz Heßlich of East Germany, the nation's first victory in the men's sprint. Yavé Cahard took silver, extending France's medal streak to five Games despite the retirement of Daniel Morelon. Sergei Kopylov of the host Soviet Union earned bronze.