MGM Music is the music publishing and licensing arm of Metro-Goldwyn-Mayer.

In 1986, after Ted Turner sold MGM to Kirk Kerkorian, MGM formed MGM Music for the licensing of music of which MGM owns the rights. Turner kept the MGM film library and rights to the soundtracks. MGM Music focuses on releasing soundtracks. It manages the music and music publishing rights of MGM films made after Turner sold the company as well as the music and music publishing rights of United Artists and Orion films. [1]

Kerkor "Kirk" Kerkorian was an American businessman, investor, and philanthropist. He was the president and CEO of Tracinda Corporation, his private holding company based in Beverly Hills, California. Kerkorian is known for having been one of the important figures in the shaping of Las Vegas and, with architect Martin Stern, Jr. described as the "father of the mega-resort". He built the world's largest hotel in Las Vegas three times: the International Hotel, the MGM Grand Hotel (1973) and the MGM Grand (1993). He purchased the Metro-Goldwyn-Mayer movie studio in 1969. 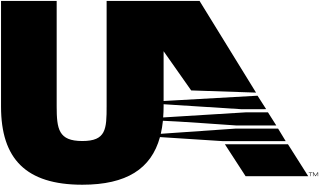 United Artists Corporation (UA), currently doing business as United Artists Digital Studios, is an American television digital production company. Founded in 1919 by D. W. Griffith, Charlie Chaplin, Mary Pickford, and Douglas Fairbanks, the studio was premised on allowing actors to control their own interests, rather than being dependent upon commercial studios. UA was repeatedly bought, sold, and restructured over the ensuing century. Metro-Goldwyn-Mayer acquired the studio in 1981 for a reported $350 million.

While MGM Music utilizes unrelated record companies to release soundtracks MGM owns, they did issue a limited edition CD on their own, the Thunderbird 6 soundtrack album [2] with only 1,500 copies made. [3] 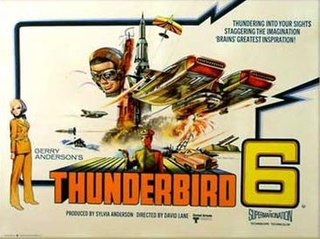 Thunderbird 6 is a 1968 British science-fiction adventure film written by Gerry and Sylvia Anderson, directed by David Lane and produced by Century 21 Cinema. A sequel to 1966's Thunderbirds Are Go, it was the second film to be adapted from the 1960s television series Thunderbirds, which combined scale models and special effects with marionette puppet characters in a filming process that the Andersons termed "Supermarionation". Intended to provide a lighter-hearted cinematic experience to contrast with the harder science of Thunderbirds Are Go, the Andersons elected to base the plot of Thunderbird 6 on Skyship One, a futuristic airship that is the latest project of the scientist Brains.

MGM founded MGM Records in 1946, but was sold to PolyGram in 1972 including rights to the MGM Records name plus a 10-year license to use the MGM lion logo. MGM Records, including its artists, was absorbed into PolyGram's Polydor Records in 1976. However, after its absorption, PolyGram continued releasing MGM soundtrack albums and reissues until 1982. Time Warner's Turner Entertainment unit now owns the rights to MGM soundtracks issued by MGM/PolyGram Records, who had licensed distribution to Warner Music Group, a former sister company to Turner Entertainment. [4] Time Warner sold Warner Music in 2004 and Warner Music's Rhino Entertainment unit's license to issue Turner owned MGM soundtracks expired at the end of 2011. Time Warner's Warner Bros. unit formed WaterTower Music to manage Time Warner owned soundtracks. [5]

MGM Records was a record label started by the Metro-Goldwyn-Mayer film studio in 1946 for the purpose of releasing soundtrack albums of their musical films. It soon transitioned to a pop music label which continued into the 1970s. The company also released soundtrack albums of the music for some of their non-musical films as well, and on rare occasions, cast albums of off-Broadway musicals such as The Fantasticks and the 1954 revival of The Threepenny Opera. In one instance, it even released the highly successful soundtrack album of a film made by a rival studio, Columbia Pictures's Born Free (1966).

PolyGram was a Dutch entertainment company and major music record label. It was founded in 1962 as the Grammophon-Philips Group by Dutch Philips and German Siemens, to be a holding for their record companies, and was renamed "PolyGram" in 1972. The name was chosen to reflect the Siemens interest Polydor Records and the Philips interest Phonogram Records. The company traced its origins through Deutsche Grammophon back to the inventor of the flat disk gramophone, Emil Berliner.

Polydor Records Ltd. is a British record label and company that operates as part of Universal Music Group. It has a close relationship with Universal's Interscope Geffen A&M Records label, which distributes Polydor's releases in the United States. In turn, Polydor distributes Interscope releases in the United Kingdom. Polydor Records Ltd. was established in London in 1954 as a British subsidiary of German company Deutsche Grammophon GmbH. It was renamed Polydor Ltd. in 1972.

London Records is a British record label that marketed records in the United States, Canada, and Latin America from 1947 to 1979 before becoming semi-independent. 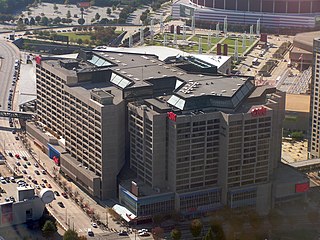 Turner Broadcasting System, Inc. is a former American television and media conglomerate, part of AT&T's WarnerMedia. Founded by Ted Turner, and based in Atlanta, Georgia, it merged with Time Warner on October 10, 1996. Among its main properties were its namesake TBS, TNT, CNN, Turner Classic Movies, Cartoon Network and Adult Swim, and TruTV. It also licensed or had ownership interests in international versions of these properties. The headquarters of Turner's properties are located in both the CNN Center in Downtown Atlanta, and the Turner Broadcasting campus off Techwood Drive in Midtown Atlanta, which also houses Turner Studios.

A major film studio is a production and distribution company that releases a substantial number of films annually and consistently commands a significant share of box office revenue in a given market. In the American and international markets, the major film studios, often simply known as the majors, are commonly regarded as the five diversified media conglomerates whose various film production and distribution subsidiaries collectively command approximately 80–85% of U.S. box office revenue. The term may also be applied more specifically to the primary motion picture business subsidiary of each respective conglomerate.

Turner Entertainment Company, Inc. is an American multimedia company founded by Ted Turner. Purchased by Time Warner in 1996, along with Turner Broadcasting System (TBS), the company was largely responsible for overseeing the TBS library for worldwide distribution. In recent years, this role has largely been limited to being the copyright holder, as it has become an in-name-only subsidiary of Warner Bros., which administers their library.

Castle Rock Entertainment is an American film and television production company founded in 1987 by Martin Shafer, director Rob Reiner, Andrew Scheinman, Glenn Padnick and Alan Horn. It is a subsidiary of Warner Bros.

Warner Home Video is the home video distribution division of Warner Bros., a subsidiary of WarnerMedia. It was founded in 1978 as WCI Home Video. The company launched in the United States with twenty films on Betamax and VHS videocassettes in late 1979. The company later expanded its line to include additional titles throughout 1979 and 1980.

Phonogram Records was started in 1970 as a successor to Philips Phonographic Industries, a unit of the Grammophon-Philips Group (GPG), a joint venture of Philips N.V. of the Netherlands and Siemens A.G. of Germany.

Associated Artists Productions, Inc. (a.a.p.) was a distributor of theatrical feature films and short subjects for television. Through acquisitions, Associated Artists Productions' assets were purchased by United Artists, with its library eventually passing to Metro-Goldwyn-Mayer in 1981, following its purchase of United Artists and then Turner Entertainment Co., following its purchase of the pre-1986 assets of Metro-Goldwyn-Mayer and select United Artists assets. Turner Entertainment is now part of WarnerMedia. Though a short lived company, Associated Artists Productions lived a legacy of being best known as the copyright owner of the Popeye, and the color pre-1948 Looney Tunes and Merrie Melodies series of shorts by Paramount Pictures and Warner Bros. respectively, as their logos and trademarks were present at the beginning of each shorts 16mm Eastmancolor prints syndicated for television in the 1960s.

United International Pictures (UIP) is a joint venture of Paramount Pictures and Universal Pictures which distributes some of their films outside the United States and Canada. UIP also had international distribution rights to certain Metro-Goldwyn-Mayer and United Artists films when MGM was part of the venture. In 2001, MGM left UIP, and signed a distribution deal with 20th Century Fox's overseas arm. The company formerly distributed DreamWorks releases internationally as well.

Nelson Entertainment was a Los Angeles-based film production and home video distribution company, a subsidiary of Nelson Holdings International Ltd., a Vancouver, Canada, holding company formed in 1985 by British film producer Barry Spikings and Richard Northcott, a British financier who amassed his fortune from a chain of hardware and furniture stores. Nelson later acquired distribution rights to a majority of Embassy titles after purchasing its home video division. Sometime in August 1987, Embassy Home Entertainment was renamed Nelson Entertainment, but retained the earlier brand for sell-through products. Nelson then financed a deal with Castle Rock Entertainment to co-produce their films, and in addition handle the international distribution rights. In September 1988, Orion Home Video took over sales and marketing for Nelson; in addition, Orion Pictures would later theatrically distribute a few of Nelson's titles. By February 1989, Orion was the official home video distributor of Nelson product.