Marriage Strike or Matrimonial Strike (German : Ehestreik) is a 1935 German comedy film directed by Georg Jacoby and starring Trude Marlen, Paul Richter and Erika von Thellmann. [1] It was remade in 1953.

The film's sets were designed by the art directors Erich Kettelhut and Max Mellin.

Willi Manages the Whole Thing is a 1972 German sports comedy film directed by Werner Jacobs and starring Heinz Erhardt, Erika von Thellmann and Hannelore Elsner. Willi takes over as manager of a provincial football team. German footballer Uwe Seeler appears as himself. It was the final entry into a four film series with Heinz Erhardt as Willi.

Young Hearts is a 1944 German drama film directed by Boleslaw Barlog and starring Harald Holberg, Ingrid Lutz, and Lisca Malbran. The film's sets were designed by art director Anton Weber. It was made by German's largest studio of the era UFA. The film was shot at the Babelsberg Studios and at the Hostivar Studios in Prague.

Erika von Thellmann (1902–1988) was an Austrian actress who appeared in more than a hundred films and television series during her career. 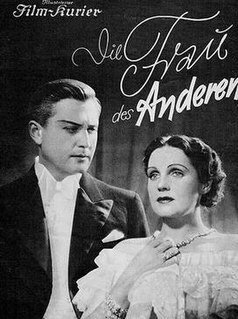 The Spanish Fly is a 1955 West German comedy film directed by Carl Boese and starring Joe Stöckel, Erika von Thellmann and Rudolf Platte. It was based on the 1913 play The Spanish Fly by Franz Arnold and Ernst Bach. A previous adaptation had been released in 1931.

Knall and Fall as Detectives is a 1953 Austrian-West German comedy film directed by Hans Heinrich and starring Hans Richter, Rudolf Carl, and Ingrid Lutz. It was made as a sequel to the 1952 film Knall and Fall as Imposters. 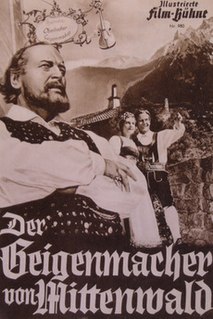 The Sold Grandfather is a 1962 West German comedy film directed by Hans Albin and starring Hans Moser, Vivi Bach and Hubert von Meyerinck. It is a remake of the 1942 film of the same title and is based on a play of the same name. 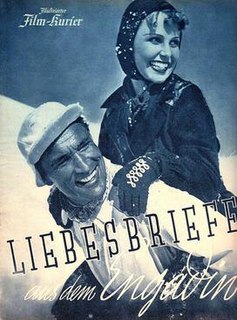 Love Letters from Engadin or Love Letters from the Engadine is a 1938 German romantic comedy film directed by Luis Trenker and Werner Klingler and starring Trenker, Carla Rust and Erika von Thellmann. It contains elements of the mountain film genre for which Trenker was best known. It is set in London and in the Engadin valley in the Swiss Alps, where much of the location shooting took place. 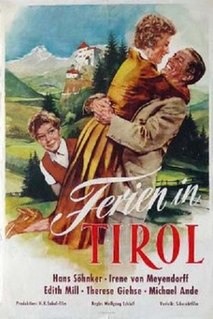 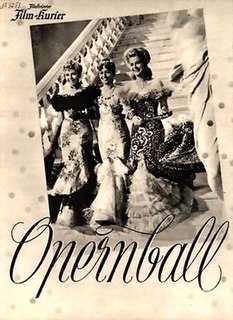 Opera Ball is a 1939 German musical comedy film directed by Géza von Bolváry and starring Heli Finkenzeller, Fita Benkhoff, and Marte Harell. An operetta film, it is based on the 1898 work of the same name composed by Richard Heuberger. In 1956 it was remade as Opera Ball in Austria with some of the same personnel. 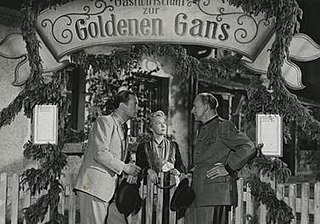 Kissing Is No Sin is a 1950 Austrian-German comedy film directed by Hubert Marischka and starring Curd Jürgens, Hans Olden and Hans Moser. The film takes its title from the waltz "Küssen ist keine Sünd" in Edmund Eysler's 1903 operetta Bruder Straubinger and features the song in its soundtrack.

Kohlhiesel's Daughters is a 1943 German comedy film directed by Kurt Hoffmann and starring Eduard Köck, Heli Finkenzeller and Oskar Sima. It is one of a number of film adaptations of Hanns Kräly's play of the same name.