Mary Paulet, Marchioness of Winchester (died 1 November 1680) was the second wife of Charles Paulet, 6th Marquess of Winchester. She was an illegitimate daughter of Emanuel Scrope, 1st Earl of Sunderland, by his mistress Martha Jeanes, or Janes, or Jones, alias San(d)ford. Although sometimes described as "Duchess of Bolton", she died before her husband was created a duke. Her son Charles succeeded his father as Duke of Bolton. [1]

Mary's first husband was Henry Carey, Lord Leppington, whom she married in about 1646. [2] A Royalist and the son of Henry Carey, 2nd Earl of Monmouth, he died in 1649, and they had no children.

On 12 February 1655, she married Charles Paulet at St. Dionis Backchurch, London. It was through his marriage to Mary that Paulet came into possession of the Bolton estates in North Yorkshire. They had four children in all:

Mary died at Moulins, Allier, France, and was buried at Wensley, Yorkshire. [3]

Marquess of Winchester is a title in the Peerage of England that was created in 1551 for the prominent statesman William Paulet, 1st Earl of Wiltshire. The marquessate is the only English one in existence (extant) therefore its holder is considered the premier marquess of England. The current holder is Nigel Paulet, 18th Marquess of Winchester whose son uses the courtesy title Earl of Wiltshire.

Charles Powlett, 3rd Duke of Bolton, styled Earl of Wiltshire from 1685 until 1699, and Marquess of Winchester from 1699 until 1722, was a British Whig politician who sat in the English House of Commons from 1705 to 1708 and in the British House of Commons between 1708 and 1717 when he was raised to the peerage as Lord Powlett and sat in the House of Lords.. 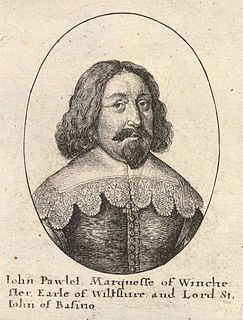 Henry Egerton was a British clergyman from the Egerton family. He was Bishop of Hereford between 1723 and his death in 1746.