MedX Corporation is a privately owned company based in Ocala, Florida. MedX is the manufacture of spinal rehabilitation equipment and premium exercise equipment. MedX equipment was invented by Arthur Jones, who was also the inventor of Nautilus exercise equipment. MedX Equipment includes the MedX Medical Lumbar Machine, Medical Cervical Machine and 25 exercise pieces. MedX Medical Lumbar machine is researched as an effective treatment for back pain.[ citation needed ] 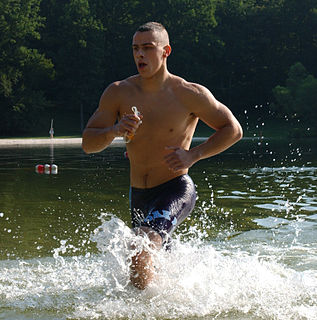 A cramp is a sudden, involuntary muscle contraction or overshortening; while generally temporary and non-damaging, they can cause significant pain and a paralysis-like immobility of the affected muscle. Onset is usually sudden and it resolves on its own over a period of several seconds, minutes, or hours. Cramps may occur in a skeletal muscle or smooth muscle. Skeletal muscle cramps may be caused by muscle fatigue or a lack of electrolytes such as sodium, potassium, or magnesium. Cramps of smooth muscle may be due to menstruation or gastroenteritis. 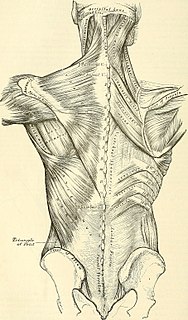 Back injuries result from damage, wear, or trauma to the bones, muscles, or other tissues of the back. Common back injuries include sprains and strains, herniated discs, and fractured vertebrae. The lumbar spine is often the site of back pain. The area is susceptible because of its flexibility and the amount of body weight it regularly bears. It is estimated that low-back pain may affect as much as 80 to 90 percent of the general population in the United States.

GE Healthcare is an American multinational conglomerate incorporated in New York and headquartered in Chicago, Illinois. As of 2017, the company is a manufacturer and distributor of diagnostic imaging agents and radiopharmaceuticals for imaging modalities that are used in medical imaging procedures. The company offers dyes that are used in magnetic-resonance-imaging procedures. GE Healthcare also manufactures medical diagnostic equipment including CT image machines. Further, it develops Health technology for medical imaging and information technologies, medical diagnostics, patient monitoring systems, disease research, drug discovery, and biopharmaceutical manufacturing. The company was incorporated in 1994 and operates in more than 100 countries. GE Healthcare operates as a subsidiary of General Electric. 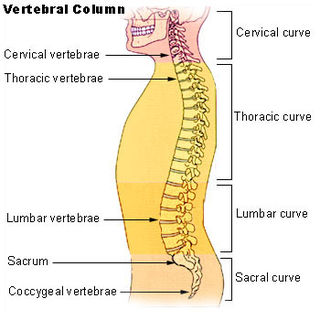 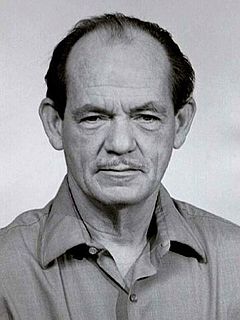 Arthur Allen Jones was the founder of Nautilus, Inc. and MedX, Inc. and the inventor of the Nautilus exercise machines, including the Nautilus pullover, which was first sold in 1970. Jones was a pioneer in the field of physical exercise i.e. weight and strength training. He was born in Arkansas, and grew up in Seminole, Oklahoma. 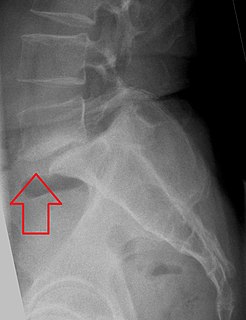 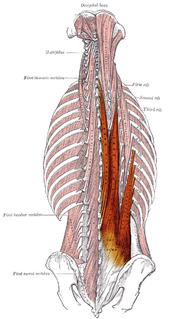 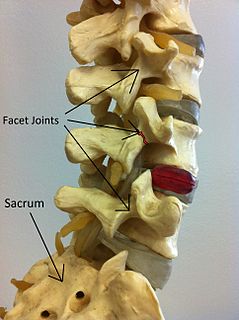 Spondylolysis (spon-dee-low-lye-sis) is defined as a defect or stress fracture in the pars interarticularis of the vertebral arch. The vast majority of cases occur in the lower lumbar vertebrae (L5), but spondylolysis may also occur in the cervical vertebrae.

Spinal disc herniation is an injury to the cushioning and connective tissue between vertebrae, usually caused by excessive strain or trauma to the spine. It may result in back pain, pain or sensation in different parts of the body, and physical disability. The most conclusive diagnostic tool for disc herniation is MRI, and treatment may range from painkillers to surgery. Protection from disc herniation is best provided by core strength and an awareness of body mechanics including posture.

The U.S. Army Research Institute of Environmental Medicine (USARIEM) is the U.S Army’s main institution and facility for military environmental medicine and exercise physiology research. It is located at Natick, Massachusetts, within the U.S. Army Soldier Systems Center (SSC) installation, but is a subordinate lab of the U.S. Army Medical Research and Materiel Command (USAMRMC), headquartered at Fort Detrick, Maryland, USA.

The Center for Emergency Medicine of Western Pennsylvania is a multi-hospital consortium based in Pittsburgh, Pennsylvania. It is claimed to be one of the world's premiere

Whole body vibration (WBV) is a generic term used when vibrations of any frequency are transferred to the human body. Humans are exposed to vibration through a contact surface that is in a mechanical vibrating state. Humans are generally exposed to many different forms of vibration in their daily lives. This could be a driver's seat, a moving train platform, through a power tool, a training platform, or one of countless other devices. It is a potential form of occupational hazard, particularly after years of exposure.

Core stability refers to a person's ability to stabilize their core. Stability, in this context, should be considered as an ability to control the position and movement of the core. Thus, if a person has greater core stability, they have a greater level of control over the position and movement of this area of their body. The body's core is frequently involved in aiding other movements of the body, such as the limbs, and it is considered that by improving core stability a person's ability to perform these other movements may also be improved i.e. core stability training may help improve someone's running ability. The body's core region is sometimes referred to as the torso or the trunk, although there are some differences in the muscles identified as constituting them. The major muscles involved in core stability include the pelvic floor muscles, transversus abdominis, multifidus, internal and external obliques, rectus abdominis, erector spinae (sacrospinalis) especially the longissimus thoracis, and the diaphragm. The minor muscles involved include the latissimus dorsi, gluteus maximus, and trapezius. Notably, breathing, including the action of the diaphragm, can significantly influence the posture and movement of the core; this is especially apparent in regard to extreme ranges of inhalation and exhalation. On this basis, how a person is breathing may influence their ability to control their core.

The interplay of exercise and music have been long-discussed, crossing the disciplines of biomechanics, neurology, physiology, and sport psychology. People "automatically feel the beat" of the music they listen to and instinctively adjust their walking pace and heart rate to the tempo of the music . Listening to music while exercising has been found in multiple studies to create an increased sense of motivation, distracting the mind while increasing heart rate. Faster tempo music has been found by researchers to motivate exercisers to work harder when performing at a moderate pace, but peak performance has been found to be unaffected by listening to music. 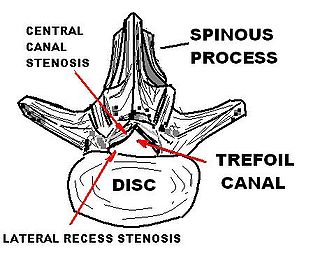 Spinal stenosis is an abnormal narrowing of the spinal canal or neural foramen that results in pressure on the spinal cord or nerve roots. Symptoms may include pain, numbness, or weakness in the arms or legs. Symptoms are typically gradual in onset and improve with bending forwards. Severe symptoms may include loss of bladder control, loss of bowel control, or sexual dysfunction.

Canon Medical Systems Corporation is a medical equipment company based in Ōtawara, Tochigi, Japan. The company, formerly known as Toshiba Medical, was the first in Japan to begin research on X-ray tubes in 1914, and has continued to be a national leader in diagnostic imaging equipment, being the first to introduce many products, including MRI and helical CT. The company was acquired by Canon Inc. in 2016.

Minimally invasive spine surgery, also known as MISS, has no specific meaning or definition. Basically, it is marketing language that implies a lack of severe invasion, that may or may not be the case. The old style open-spine surgery for a simple disc problem used to require a 5-6 inch incision and a month in the hospital, 60 years ago. Miss techniques utilize more modern technology, advanced imaging techniques and special medical equipment to reduce tissue trauma, bleeding, radiation exposure, hospital stays and recovery by minimizing the size of the incision. Modern endoscopic procedures can be done through a 2 to 5 mm skin opening, with no internal cutting. By contrast, procedures done with a microscope require skin openings of approximately one inch, or more. Since the one inch cut goes all the way down, it can only be called relatively MISS.

Andhra Pradesh MedTech Zone Limited is an enterprise under the Government of Andhra Pradesh to promote medical device manufacturing in India. It was laid foundation on Aug 20, 2016 and inaugurated by chief minister of Andhra Pradesh Nara Chandrababu Naidu on Dec 13, 2018.