A medical journal is a peer-reviewed scientific journal that communicates medical information to physicians and other health professionals. Journals that cover many medical specialties are sometimes called general medical journals. [1]

A randomized controlled trial is a type of scientific experiment or intervention study that aims to reduce certain sources of bias when testing the effectiveness of new treatments; this is accomplished by randomly allocating subjects to two or more groups, treating them differently, and then comparing them with respect to a measured response. One group—the experimental group—receives the intervention being assessed, while the other—usually called the control group—receives an alternative treatment, such as a placebo or no intervention. The groups are monitored under conditions of the trial design to determine the effectiveness of the experimental intervention, and efficacy is assessed in comparison to the control. There may be more than one treatment group or more than one control group.

Publication bias is a type of bias that occurs in published academic research. It occurs when the outcome of an experiment or research study influences the decision whether to publish or otherwise distribute it. Publishing only results that show a significant finding disturbs the balance of findings, and inserts bias in favor of positive results. The study of publication bias is an important topic in metascience. 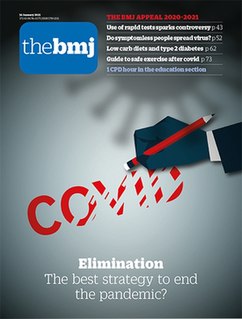 JAMA: The Journal of the American Medical Association is a peer-reviewed medical journal published 48 times a year by the American Medical Association. It publishes original research, reviews, and editorials covering all aspects of biomedicine. The journal was established in 1883 with Nathan Smith Davis as the founding editor. The journal's editor-in-chief is Howard Bauchner of Boston University, who succeeded Catherine DeAngelis on July 1, 2011. Due to JAMA deputy editor Ed Livingston downplaying the existence of racism in medicine on a JAMA Network podcast, Bauchner has been placed on administrative leave since March 25, 2021 while his role in the publishing of the comments is investigated.

Sir Austin Bradford Hill was an English epidemiologist and statistician, pioneered the randomised clinical trial and, together with Richard Doll, demonstrated the connection between cigarette smoking and lung cancer. Hill is widely known for pioneering the "Bradford Hill" criteria for determining a causal association.

A medical guideline is a document with the aim of guiding decisions and criteria regarding diagnosis, management, and treatment in specific areas of healthcare. Such documents have been in use for thousands of years during the entire history of medicine. However, in contrast to previous approaches, which were often based on tradition or authority, modern medical guidelines are based on an examination of current evidence within the paradigm of evidence-based medicine. They usually include summarized consensus statements on best practice in healthcare. A healthcare provider is obliged to know the medical guidelines of his or her profession, and has to decide whether to follow the recommendations of a guideline for an individual treatment.

Kamran Abbasi is a physician, visiting professor at the Department of Primary Care and Public Health, Imperial College, London, executive editor of the British Medical Journal(BMJ), editor of the Journal of the Royal Society of Medicine(JRSM), journalist, cricket writer and broadcaster, who contributed to the expansion of international editions of the BMJ and has argued that medicine cannot exist in a political void.

A medical specialty is a branch of medical practice that is focused on a defined group of patients, diseases, skills, or philosophy. Examples include children (paediatrics), cancer (oncology), laboratory medicine (pathology), or primary care. After completing medical school, physicians or surgeons usually further their medical education in a specific specialty of medicine by completing a multiple-year residency to become a specialist.

The Medical Repository was the first American medical journal, founded in 1797 and published quarterly, with some interruptions, through 1824.

The Harveian Oration is a yearly lecture held at the Royal College of Physicians of London. It was instituted in 1656 by William Harvey, discoverer of the systemic circulation. Harvey made financial provision for the college to hold an annual feast on St. Luke's Day at which an oration would be delivered in Latin to praise the college's benefactors and to exhort the Fellows and Members of this college to search and study out the secrets of nature by way of experiment. Until 1865, the Oration was given in Latin, as Harvey had specified, and known as the Oratio anniversaria; but it was thereafter spoken in English. Many of the lectures were published in book form.

Drummond Rennie is an American nephrologist and high altitude physiologist who is a contributing deputy editor of The Journal of the American Medical Association (JAMA) and an adjunct professor of medicine at the University of California, San Francisco.

A general medical journal is an academic journal dedicated to medicine in general, rather than a specific field of medicine.

Metascience is the use of scientific methodology to study science itself. Metascience seeks to increase the quality of scientific research while reducing waste. It is also known as "research on research" and "the science of science", as it uses research methods to study how research is done and where improvements can be made. Metascience concerns itself with all fields of research and has been described as "a bird's eye view of science." In the words of John Ioannidis, "Science is the best thing that has happened to human beings ... but we can do it better."

In academic publishing, a sister journal, mirror journal or companion journal is a newer academic journal that is affiliated with an older, better-established journal in the same field.

BMJ USA: Primary Care Medicine for the American Physician was a monthly peer-reviewed medical journal published by the BMJ Group as a sister journal to the BMJ. It was intended to publish material specifically relevant to readers in the United States. It was established in 2001 and was discontinued permanently in 2005.

Journalology is the scholarly study of all aspects of the academic publishing process. The field seeks to improve the quality of scholarly research by implementing evidence-based practices in academic publishing. The term "journalology" was coined by Stephen Lock, the former editor-in-chief of the BMJ. The first Peer Review Congress, held in 1989 in Chicago, Illinois, is considered a pivotal moment in the founding of journalology as a distinct field. The field of journalology has been influential in pushing for study pre-registration in science, particularly in clinical trials. Clinical trial registration is now expected in most countries. Journalology researchers also work to reform the peer review process.