Mervyn John Kitchen (born 1 August 1940), is a former English first-class cricketer and international umpire. [1] In his playing days he was a left-handed batsman for Somerset County Cricket Club, making 15,230 runs in his 354 first-class games between 1960 and 1979. He topped the Somerset averages in 1966 and 1968. After retiring as a player he went on to become a first-class cricket umpire and he umpired in 20 Test matches and 28 One-Day Internationals before retiring from that at the age of 65 in 2005. 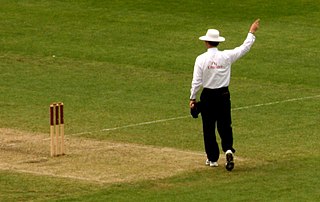 Kitchen was born in Nailsea, Somerset where his father played local club cricket. [2] He was educated locally at Backwell Secondary Modern School. He joined the playing staff at Somerset County Cricket Club as a 16-year-old in 1957 and appeared in the next three seasons for the county's second eleven in Minor Counties matches and, from 1959, in games in the newly constituted Second Eleven Championship. [3] [4]

Nailsea is a town in the unitary authority of North Somerset in the ceremonial county of Somerset, England, approximately 8 miles (13 km) southwest of Bristol, and about 11 miles (18 km) northeast of the seaside resort of Weston-super-Mare. The nearest village is Backwell, which lies south of Nailsea on the opposite side of the Bristol to Exeter railway line. Nailsea is a commuter town with a population of 15,630. 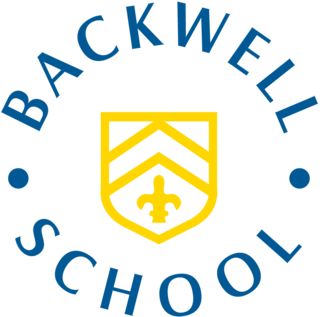 Backwell School is a secondary academy school in Backwell, Somerset, England. It is considered to be one of the best-performing state schools in England, leading results at both GCSE and A level in the area and consistently being rated “Outstanding” by Ofsted.

He made his debut for the Somerset first eleven in 1960 as a middle-order batsman, but made little impact in that or the next season, and in 1962 and 1963, although he played in around half of Somerset's first-class matches, his batting average was below 20 and his place was often dependent on injuries to other players. At this stage in his career, he was primarily a defensive batsman "which suited neither his temperament, for he was not a selfish man, nor his technique", according to one history of Somerset cricket. [5] He played in most of Somerset's matches in the 1964 season and finally averaged more than 20 runs per innings, but returned to inconsistent performances and an uncertain place in the team in 1965. [6]

At the end of the 1965 season, Peter Wight, who had been a fixture in the Somerset side since 1955, batting at No 3, but whose form had declined markedly in the previous three seasons, was not re-engaged for the following year. The resulting vacancy in the Somerset batting line-up in 1966 was filled by Kitchen and he responded with his most successful season, finishing top of the county's batting averages with 1422 runs in all first-class matches. [6] The batting style had changed as well, and Kitchen was a much more attacking player than he had been, exemplified by an innings in July in a non-first-class match against the International Cavaliers team at Bath, where he won the match by hitting both of the last two balls of a 38-over match from the South African Test bowler Neil Adcock for six. [7] After this innings, Kitchen became a much more confident batsman and in the space of just over a week at the end of the season he made his first two first-class centuries and was awarded his county cap: "Until then in 142 innings he had not scored a century and had averaged under 20," says the history of Somerset cricket. [5]

Peter Bernard Wight was a Guyanese first-class cricketer who played for Somerset, Canterbury and British Guiana. Wight was a prolific run scorer at the top of the order, scoring 16,965 runs during his thirteen years at Somerset; and at the time of his death only Harold Gimblett had made more runs for the county. After playing, he became an umpire in English first-class cricket, standing in matches from 1966 to 1995.

The International Cavaliers were an ad hoc cricket team made up of famous cricketers in order to encourage local cricket. Their teams included many prominent cricketers from the 1940s, 1950s, 1960s and 1970s as many retired veterans and talented young players were in the team at one point or another. International tours were arranged to South Africa in 1960-61, Africa and India in 1962-63 and the West Indies in 1964-65, 1965–66 and 1969-70. These were usually made up of Test players whose countries were not touring that season or who were not required for their Test side.

Test cricket is the form of the sport of cricket with the longest duration, and is considered the game's highest standard. Test matches are played between national representative teams with "Test status", as determined and conferred by the International Cricket Council (ICC). The term Test stems from the fact of the form's long, gruelling matches being both mentally and physically testing. Two teams of 11 players each play a four-innings match, which may last up to five days. It is generally considered the most complete examination of a team's endurance and ability.

Frank Stanley Lee, born at St. John's Wood on 24 July 1905 and died in Westminster on 30 March 1982 was an English first-class cricketer and an umpire who officiated in Test matches.

Graham Malcolm Tripp, born at Clevedon, Somerset on 29 June 1932, was a cricketer who played first-class cricket for Somerset in the 1950s.

Peter James Eele, was an English first-class cricketer who played for Somerset and was later a first-class umpire.

Frederick Castle, born 8 April 1909 at Elham, Kent and died 17 May 1997 at Portscatho, Cornwall, was a schoolmaster in Bath, Somerset, who played first-class cricket for Somerset County Cricket Club in the school holidays for the four summers immediately after the Second World War.

Miles Coope, born at Gildersome, Yorkshire, on 18 November 1916 and died also at Gildersome on 5 July 1974, played first-class cricket for three seasons after the Second World War for Somerset.

Brian Roe was an English cricketer who played first-class cricket for Somerset between 1957 and 1966.

Christopher Herbert Millington Greetham played first-class cricket for Somerset from 1957 to 1966 as a middle-order batsman and a medium-pace bowler. Greetham was a tall, fair-haired right-handed batsman usually used in Somerset's late middle order and a right-arm seam bowler who, for a couple of seasons in the early 1960s, took enough wickets to be classed as an all-rounder. He was considered a good cover fielder, with a strong and accurate throw.

John Lyon was a first-class cricketer who played for Lancashire between 1973 and 1979.

Julian George Wyatt is a former cricketer who played first-class and List A cricket for Somerset from 1983 to 1989. Wyatt was born on 19 June 1963 at Paulton, Somerset.

Gary Vincent Palmer played first-class and List A cricket for Somerset from 1982 to 1989. He also played for the England Young Cricketers side in both under-19 Test and One-day International matches. He was born at Taunton, Somerset and is the son of the former Somerset and England Test cricketer Ken Palmer.

Michael Edward Latham played first-class cricket for Somerset in 1961 and 1962. He also played for Northumberland for many years in the Minor Counties and appeared for them in one List A match in 1971. He was born in Birmingham.

Gregor John Kennis played first-class and List A cricket for Surrey between 1994 and 1997 and for Somerset between 1998 and 2000. He was born at Yokohama, Japan.

Cleveland Vincent Lindo played first-class cricket in one match for Nottinghamshire in 1960 and in another single match for Somerset in 1963. He was born at Bigwoods, St Elizabeth, Jamaica.