Mi Tren is a light rail network under construction in the Bolivian city of Cochabamba, linking the city with Suticollo, El Castillo and San Simon University. Construction began in 2017 and it was aimed to be finished in 2020. [1] However, construction work was halted in late 2019 with reports of delayed payments between project promoters and key contractors. As of December 2020, new funding from the state has allowed construction to restart. It is now hoped that service on Red and Green lines will begin by the end of 2021 (with the Yellow line delayed further). [2]

Stadler is due to supply 12 vehicles for the network, with delivery expected in August 2019, and Stadler is to provide three years' maintenance. Reports suggest that the Metelitsa model will be supplied, with the three-section vehicles having capacity for 200 passengers and a maximum speed of 80 km/h. [5] 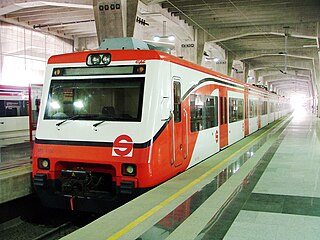 The Suburban Railway of the Valley of Mexico Metropolitan Area is an electric suburban rail system in Mexico City. It is also known as Valley of Mexico Suburban Rail System and colloquially referred to as El Tren Suburbano or Ferrocarril Suburbano. It is designed to complement the extensive Mexico City metro system, Latin America's largest and busiest urban rail network.

The Stadler GTW is an articulated railcar for local transport made by Stadler Rail of Switzerland. GTW stands for Gelenktriebwagen.

Line 6 Finch West, also known as the Finch West LRT, is a light rail line under construction in Toronto, Ontario, Canada, to be operated by the Toronto Transit Commission. It was part of the Transit City proposal announced on March 16, 2007. The 11-kilometre (6.8 mi), 18-stop line is to extend from Finch West station on Line 1 Yonge–University to the North Campus of Humber College in Etobicoke. The line is forecast to carry about 14.6 million rides a year or 40,000 a day by 2031. It is scheduled for completion in 2023, with an estimated cost of CA$1.2 billion .

The electricity sector in Bolivia is dominated by the state-owned ENDE Corporation, although the private Bolivian Power Company is also a major producer of electricity. ENDE had been unbundled into generation, transmission and distribution and privatized in the 1990s, but most of the sector was re-nationalized in 2010 (generation) and 2012.

The Roca line is a 1,676 mm gauge commuter rail service in the Buenos Aires Province, Argentina, part of General Roca Railway network. The service is currently operated by State-owned company Trenes Argentinos, from the city-centre terminus of Constitución south to Ezeiza, Alejandro Korn, La Plata, Cañuelas, Chascomús, Gutiérrez and Lobos, and west to Sarmiento Line's station Haedo. The transfer stations between the branch lines are Avellaneda, Temperley, Bosques and Berazategui. 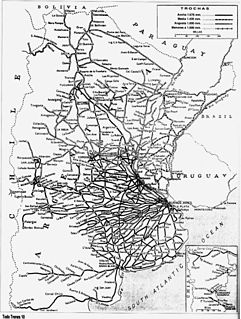 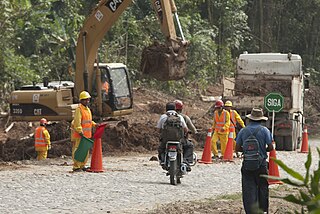 The Villa Tunari – San Ignacio de Moxos Highway, also known as the Cochabamba–Beni Highway is a road project in Bolivia connecting the towns of Villa Tunari and San Ignacio de Moxos. It would provide the first direct highway link between the two departments. The project has an expected overall cost of $415 million and extends 306 kilometres (190 mi), divided into three segments: Segment I from Villa Tunari to Isinuta, Segment II from Isinuta to Monte Grande, and Segment III from Monte Grande to San Ignacio de Moxos. Opposition to the highway by local indigenous communities, environmentalists, as well as shifting relations between the Bolivian government and the project's builders and funders interrupted construction of Segment I from October 2011 until October 2013, indefinitely delayed Segment II, and postponed construction of Segment III until June 2015. The government has pledged to improve standards of living in the region before continuing with Segment II. 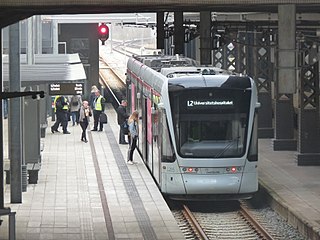 The Aarhus Letbane is a light rail system in the city of Aarhus, Denmark. It is operated by the company Midttrafik. The first line opened in December 2017, but the system is under continuous development and expansion. Service on the intercity section Odder to Lisbjergskolen opened on August 25, 2018. A third intercity line to Grenå opened on 30 April 2019. More lines are being planned. 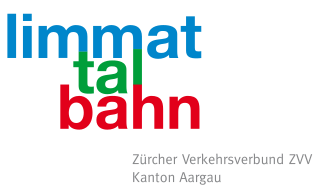 The Limmattal light rail line is a new metre gauge light rail line that is under construction and partially completed on an alignment running through the Limmat Valley, in the Swiss cantons of Aargau and Zürich to the west of the city of Zürich. The new line will, when fully completed, be 13.4 kilometres (8.3 mi) long, will serve 27 stops, and will operate from Zürich Altstetten to Killwangen via Farbhof, Schlieren, Urdorf, Dietikon and Spreitenbach.

The Stadler Citylink is a series of tram-trains manufactured by Stadler Rail at its Valencia factory since 2003. They are currently used in Spain, Germany and the United Kingdom, with the Class 399 variant in service on the Sheffield Supertram network in the United Kingdom from September 2017 as the country's first tram-train. The second tram-train to be introduced in the UK will be introduced on the South Wales Metro in 2022.

Light rail is a commonly used mode of public transit in South America. The term light rail was coined in 1972 by the Urban Mass Transportation Administration to describe new streetcar transformations which were taking place in Europe and the United States. The Germans used the term Stadtbahn, which is the predecessor to North American light rail, to describe the concept, and many in UMTA wanted to adopt the direct translation, which is city rail. However, in its reports UMTA finally adopted the term light rail instead.

The Toluca–Mexico City commuter rail project is a 57.7 km (35.9 mi) commuter rail line currently under construction. Also known as Interurban Train Mexico City–Toluca, the passenger railway line will connect the cities of Toluca and Mexico City. The project was announced by President Enrique Peña Nieto on 1 December 2012. Construction began in July 2014. As of October 2020, it was estimated to open in 2023.