Frederick Reginald Ironside (born February 12, 1950), better known as Michael Ironside, is a Canadian actor. He has worked as a voice actor, producer, film director, and screenwriter in film and television series in various Canadian and American productions. He is best known for playing villains and "tough guy" heroes, though he has also portrayed sympathetic characters.

Ironside was born in Toronto, Ontario, the son of Robert Walter Ironside and Patricia June Ironside ( née Passmore). His father was a street lighting technician and laborer [1] and his mother a housewife. He is of English, Irish and Scottish descent, and is one of five children. [2] Ironside attended the Ontario College of Art in Toronto and at age 15 wrote a play, The Shelter, which won the first prize in a university contest. [3] He also won the Senior writing award at Riverdale Collegiate Institute in 1968. [4]

Ironside specializes in playing villains and tough guys. One of his first roles was as evil telepath Darryl Revok in Scanners (1981), an early film by David Cronenberg. He played the role of a serial killer, Colt Hawker, in the 1982 slasher film Visiting Hours , directed by Jean-Claude Lord, and appeared as Miler Crane in The A-Team episode "Taxicab Wars" (1983).

His breakthrough role was as cynical anti-hero Ham Tyler in the television miniseries V: The Final Battle and its following 19 episode series (1984). He is also known for his roles in Top Gun (1986) as Naval Aviator Lieutenant Commander Rick "Jester" Heatherly, Extreme Prejudice (1987) as Major Paul Hackett, Watchers (1988) as a conscience-free mutant assassin, and Total Recall (1990) as Richter, the murderous henchman of Ronny Cox's villain Cohaagen. Ironside played the villainous General Katana in the science fiction sequel Highlander II: The Quickening (1991) and, after a brief stint in ER's inaugural season, he was tapped to replace Roy Scheider as captain of the high-tech submarine seaQuest in the third season of seaQuest DSV as Captain Oliver Hudson. However, NBC cancelled the series after only thirteen episodes with Ironside as the star. In 1992, he starred as M. Emmet Walsh's brother in David Winning's thriller Killer Image . In 1994, Ironside starred as Luck Hatcher in the western Dead Man's Revenge. In 1995, Ironside had a brief cameo as Lt. Col. Stone in Major Payne. In 1997, Ironside was reunited with Total Recall director Paul Verhoeven for Starship Troopers . He appeared in The Perfect Storm (2000) and The Machinist (2004). He starred in the film Chaindance as a small-time crook, unable to make it on the outside, who was paired up with a handicapped man. Ironside starred as Resistance General Hugh Ashdown in Terminator Salvation, reunited with his co-star from The Machinist, Christian Bale. [5]

He voiced comic book villain Darkseid in the DC Animated Universe, specifically Superman: The Animated Series , Justice League and Justice League Unlimited , and reprised the role in 2020 the DC Universe web series Harley Quinn. Ironside's performance as Darkseid was met with wide critical acclaim, with some comparing the impact it had on the character to that of Mark Hamill's voice performance as the Joker. In one episode of The New Batman Adventures , he voiced Batman in a Batman: The Dark Knight Returns sequence. Another part he played in the DC Comics universe was Lois Lane's father, General Sam Lane in three episodes of Smallville.

He has worked in video games as the voice of Tom Clancy's character Sam Fisher in the Splinter Cell games and is cast as the Global Defense Initiative's Lieutenant General Jack Granger in Command & Conquer 3: Tiberium Wars . Ironside signed a five-year deal to portray Captain Jonas Trager in the SpaceWorks Television science fiction series, Ice Planet but the show was not produced.

In 2009, he starred in The Beacon under the direction of Michael Stokes. [5]

In 2011, Ironside appeared in the film: X-Men: First Class, playing the Captain of the 7th Fleet. He appeared in Justified playing a supporting role as a Detroit hitman the following year. He also voiced the role of Ultra Magnus in season 3 of the Transformers Prime Beast Hunters television series in 2013. [5]

Ironside appeared in the TV series Walker, Texas Ranger as 'The Chairman'.

In 2015, he appeared in the television series The Flash as Lewis Snart, the father of Captain Cold. Also in 2015, he starred as the main villain Zeus in the cult hit film Turbo Kid .

He has survived both thyroid and prostate cancer. [8]

Darkseid is a supervillain appearing in American comic books published by DC Comics. Created by writer-artist Jack Kirby, the character briefly appeared in Superman's Pal Jimmy Olsen #134 in December, 1970, before being fully introduced in the debut issue of The Forever People in February, 1971. Darkseid is the tyrannical Lord of Apokolips whose ultimate goal is to enslave the multiverse by eliminating all hope and free will in sentient beings. A New God and one of the most powerful beings in the DC Universe, he was initially conceived as the chief antagonist of Kirby's Fourth World saga before becoming one of Superman's greatest villains and the Justice League's archenemy.

Justice League is an American animated television series which ran from 2001 to 2004 on Cartoon Network. It is the seventh series of the DC Animated Universe. The show was produced by Warner Bros. Animation. It is based on the Justice League of America and associated comic book characters published by DC Comics. It serves as a prequel to Batman Beyond and as a sequel to Batman: The Animated Series,Superman: The Animated Series and The New Batman Adventures. After two seasons, the series was rebranded as Justice League Unlimited, a successor series which aired for three seasons.

DeSaad is a supervillain, appearing in books published by DC Comics. He is one of the followers of Darkseid from the planet of Apokolips in Jack Kirby's Fourth World meta-series.

Justice League Unlimited (JLU) is a 2004—2006 American superhero animated television series that was produced by Warner Bros. Animation and aired on Cartoon Network. Featuring a wide array of superheroes from the DC Comics universe, and specifically based on the Justice League superhero team, it is a direct sequel to the previous Justice League animated series and picks up where Justice League left off. Like its predecessor, the show is also a prequel to Batman Beyond. JLU debuted on July 31, 2004, on Toonami and ended on May 13, 2006. It is the eighth and final series of the DC Animated Universe, which started with Batman: The Animated Series in 1992.

Clarence John Brown III is an American film, television, and voice actor. He is known for his roles as The Kurgan in Highlander (1986), Capt. Byron Hadley in The Shawshank Redemption (1994), Sgt. Charles Zim in Starship Troopers (1997), Brother Justin Crowe on the HBO series Carnivàle (2003–2005), Waylon "Jock" Jeffcoat on the Showtime series Billions (2018–2019) and Stanley Thomas in Promising Young Woman (2020). 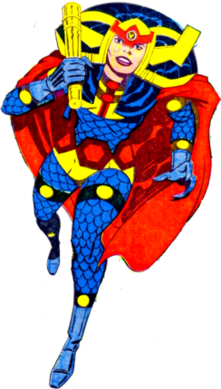 Big Barda is a fictional superheroine appearing in American comic books published by DC Comics. She first appeared in Mister Miracle #4, and was created by Jack Kirby. Jack Kirby based Barda's physical appearance on Lainie Kazan, who had recently appeared topless in Playboy. Mark Evanier, Kirby's assistant on the Fourth World comics, has explained the genesis of the character: "Jack based some of his characters on people in his life or in the news... the characterization between Scott 'Mister Miracle' Free and Barda was based largely—though with tongue in cheek—on the interplay between Kirby and his wife Roz". In 2011, Big Barda was ranked 75th in Comics Buyer's Guide's "100 Sexiest Women in Comics" list.

Steppenwolf is a supervillain appearing in comic books published by DC Comics. Created by writer-artist Jack Kirby, the character is introduced in New Gods #7. A New God and military general from the planet Apokolips, Steppenwolf is the brother of Heggra and therefore the maternal uncle of Darkseid. He is commonly depicted as Darkseid's subordinate, commanding his nephew's army of Parademons in conflicts against Superman and the Justice League.

Secret Society of Super Villains (SSoSV) is a DC Comics title that debuted in May–June 1976. The series presented a group of DC's supervillains, mostly foes of the Justice League of America. The series was cancelled with issue #15 in July 1978, as part of the DC Implosion, a period when DC suddenly cancelled dozens of comics.

Parademons are a fictional group of extraterrestrials appearing in American comic books published by DC Comics. They are monstrous shock troops of Apokolips used by Darkseid to maintain order on the planet.

Kanto is a fictional extraterrestrial assassin and a supervillain published by DC Comics.

Super Friends: The Legendary Super Powers Show is an American animated television series about a team of superheroes which ran from 1984 to 1985 on ABC. It was produced by Hanna-Barbera Productions and is based on the Justice League and associated comic book characters published by DC Comics.

Throughout his 80-year history, the Flash has appeared in numerous media. 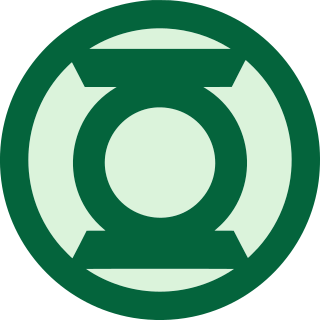 The many incarnations of the DC Comics superhero Green Lantern have appeared in numerous media over the years.

The Joker, a supervillain in DC Comics and the archenemy of the superhero Batman, has appeared in various media. WorldCat records over 250 productions featuring the Joker as a subject, including films, television series, books, and video games. Live-action films featuring the character are typically the most successful.

ItsJustSomeRandomGuy is the alias of Michael Agrusso, an American voice acting teacher, writer, and performer working and living in Los Angeles, California. The channel is the source of the YouTube video parody series "Hi, I'm a Marvel...and I'm a DC", which spoofs Apple's Get a Mac television commercials, known for their opening lines, "Hello, I'm a Mac..." "...And I'm a PC."

Lego DC Super-Villains is a Lego-themed action-adventure platform video game developed by Traveller's Tales. The fourth installment in the Lego Batman series of games, it is a spin-off that focuses entirely on villains of the DC Universe; being the first in the series to do so since the villain levels from Lego Batman: The Videogame. The game was released by Warner Bros. Interactive Entertainment on 16 October 2018 in North America and 19 October worldwide. The macOS version of the game was released by Feral Interactive on 30 July 2019.