Military OneSource is a U.S. Department of Defense program that provides resources and support to active-duty, National Guard and Reserve service members and their families anywhere in the world. The program is available 24 hours a day, 7 days a week at no cost to users.

Military OneSource services supplement existing service-branch and installation resources. Language-interpretation services are available. Service members and their families can access the program at www.MilitaryOneSource.mil [1] or by calling 1-800-342-9647. International dialing instructions are also listed on the website.

Military OneSource is administered as a commercial employee assistance program by ValueOptions under contract to the Department of Defense. [2] ValueOptions took over the contract from Ceridian in 2011. [3]

An employee assistance program (EAP) is an employee benefit program that assists employees with personal problems and/or work-related problems that may impact their job performance, health, mental and emotional well-being. EAPs generally offer free and confidential assessments, short-term counseling, referrals, and follow-up services for employees. EAP counselors may also work in a consultative role with managers and supervisors to address employee and organizational challenges and needs. Many corporations, academic institution and/or government agencies are active in helping organizations prevent and cope with workplace violence, trauma, and other emergency response situations. There is a variety of support programs offered for employees. Even though EAPs are mainly aimed at work-related issues, there are a variety of programs that can assist with problems outside of the workplace. EAPs have grown in popularity over the years, and are more desirable economically and socially.

The military of the United States is deployed in most countries around the world, with between 150,000 to 200,000 of its active-duty personnel stationed outside the United States and its territories. This list consists of deployments excepting active combat deployments, which consist of troops in Iraq and Syria. The exact number of these troops is currently in flux due to troop withdrawals.

Family Readiness Group (FRG) is a command-sponsored organization of family members, volunteers, soldiers, and civilian employees associated with a particular unit within the United States Army, the United States Army Reserve, and the Army National Guard communities. They are normally organized at company and battalion levels, and fall under the responsibility of the unit's commanding officer.

Psychiatric and mental health nurses in the U.S. Army Nurse Corps employing groundbreaking protocols and treatments in psychiatric issues to address the unique challenges that our service men and women face, more commonly post-traumatic stress disorder and traumatic brain injuries. Most people understand that trauma exposure is a popular occupational hazard for military members. Psychiatric screenings, before and during their enlistment, and treatments after being exposed to warfare, death, destruction, and torture have been extremely beneficial for military personnel and their dependents. 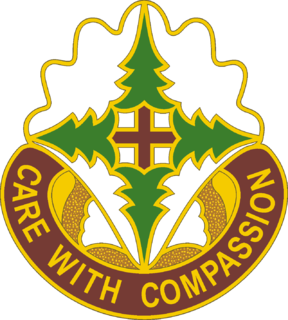 The Madigan Army Medical Center, located on Joint Base Lewis-McChord just outside Lakewood, Washington, is a key component of the Madigan Healthcare System and one of the largest military hospitals on the West Coast of the United States.

Catholic Community Services is a ministry of the Roman Catholic Diocese of Salt Lake City that operates various programs in Salt Lake City and Ogden designed to provide help and create hope for those impacted by homelessness as food insecurity. CCS' Migration and Refugee Services department also equips and empower immigrants and refugees settling into the life in the United States. Its mission is to practice gospel values of love, compassion, and hope through service, support, and collaboration. It is a member of the National organization Catholic Charities. Its Main Office is located at 224 North 2200 West Salt Lake City, Utah.

The GI Rights Network is coalition of nonprofit, nongovernmental organizations that provide free and confidential information to United States military servicemembers, veterans, and their families. Most of the counseling provided by the Network is done via phone through the GI Rights Hotline 877-447-4487. The Network also provides email counseling and some live in-person counseling in places where offices exist. The Network also maintains a website with easy access to information about discharges, military regulations, GI rights, and other organizations; most information is available in both English and Spanish.

Community Action Services and Food Bank (CASFB), located in Provo, Utah, is a non-profit organization that serves the low-income population of Utah, Summit, and Wasatch counties and focuses on the operation of programs that help alleviate poverty. It was founded in 1967 following the signing of the Economic Opportunity Act in 1964 by President Lyndon B. Johnson and is one of more than 1,000 independent Community Action Agencies across the country. It is sponsored by United Way of Utah County.

The Community Business Development Corporation (CBDC) is a federal and provincially funded not-for-profit organization. CBDCs assist in the creation of small businesses and in the expansion and modernization of existing small businesses by providing financial and technical services to entrepreneurs.

The Pennsylvania Department of Aging is a cabinet-level agency charged with providing aid to Pennsylvania's approximately 3 million individuals age 60 and older. Although the bureau operates some services directly, such as the Pharmaceutical Contact for the Elderly (PACE) prescription drug program, it generally serves as a clearinghouse of funding and information for county-level Area Agencies on Aging. The department was formed under the governorship of Milton Shapp.

The Defense Centers of Excellence for Psychological Health and Traumatic Brain Injury (DCoE) is a United States Department of Defense (DoD) organization that provides guidance across DoD programs related to psychological health (PH) and traumatic brain injury (TBI) issues. The organization's official mission is to "improve the lives of our nation’s service members, families and veterans by advancing excellence in psychological health and traumatic brain injury prevention and care."

Friends-International (FI) is an international social enterprise and registered non-governmental organization focusing on children's empowerment established in Cambodia in 1994. Its mission is "to build a future where all children are safe from all forms of abuse, are able to become productive citizens of their countries and contribute to a more equitable and sustainable world." FI works in Cambodia, Indonesia, Laos, Thailand and with almost 50 partners around the world, providing comprehensive social services to marginalized urban young people and their families. Since its inception, FI has supported the education, well-being, and sustainable reintegration of more than 300,000 marginalized children, youth, and caregivers.

Comprehensive Soldier Fitness (CSF) was established in August 2008 by then-Chief of Staff of the United States Army, General George W. Casey, Jr., in an effort to address the challenges being faced due to multiple deployments required by persistent conflicts in Iraq and Afghanistan. Instead of focusing only on treatment after the issues arose, Casey wanted to also provide preventative measures to the soldiers, their families and Army civilians to make them stronger on the front end. CSF Resilience Training was created to give these individuals the life skills needed to better cope with adversity and bounce back stronger from these challenges. Renamed in October 2012 as Comprehensive Soldier and Family Fitness (CSF2), was designed to build resilience and enhance performance of the Army family—soldiers, their families, and Army civilians. Comprehensive Soldier Fitness is not a treatment program in response to adverse psychological conditions. CSF2 has three main components: online self-development, training, and metrics and evaluation. According to Army Regulation 350–53, to be published December 2013, the following are the Vision, Mission and components of CSF2:

Semper Fi Fund is a non-profit 501(c)(3) organization that provides a variety of programs to assist wounded veterans in all branches of the United States Armed Forces. The organization describes its mission as "providing urgently needed resources and support for post-9/11 combat wounded, critically ill and catastrophically injured members of the U.S. Armed Forces and their families." As of November 2019, the Semper Fi Fund has issued 209,000 grants totaling $210 million in assistance to 24,000 service members and their families.

The Yellow Ribbon Reintegration Program (YRRP) is a United States Department of Defense (DoD) effort to promote the well-being of National Guard and Reserve members, their families and communities, by connecting them with resources throughout the deployment cycle. Congress directed the Secretary of Defense to establish the YRRP in 2008 in Section 582 as part of Public Law (PL) 110-181 in direct response to the Nation's recognition of the challenges facing the Reserve Component community. Since 2008, YRRP has served more than 1.4 million Service members and their families. The Yellow Ribbon Reintegration Program is aligned under the Family and Employer Programs and Policy Office within the Office of the Assistant Secretary of Defense for Manpower and Reserve Affairs.

The Transition Assistance Program (TAP) is a U.S. Department of Defense (DoD) led program that provides information and training to ensure service members transitioning from active-duty are prepared for their next step in life - whether pursuing additional education, finding a job in the public or private sector, or starting their own business.

Sexual Assault Prevention and Response (SAPR) is a US military training program designated to educate service members and to provide support and treatment for their families who have experienced any form of sexual assault. The SAPR program provides treatment and support including, medical, counseling, and direct guidance in navigating through the Uniform Code of Military Justice (UCMJ). This program runs in accordance with United States Department of Defense Instruction 6495.02 – SAPR program procedures. Generally anyone who is entitled to receive care at a military treatment facility is also eligible to receive care and support through SAPR. Each branch of the military has adapted the SAPR program and each branch has a SAPR point of contact.

Intimate partner violence (IPV), is defined as physical and sexual violence or threat of violence, intimidation, or coercion that occurs between past or current intimate partners. Perpetrators of violence may use coercion tactics to keep the partner in the home. These tactics could include threatening harm to a family pet or threatening to take custody of children if the partner attempts to leave. IPV is a serious public health concern in the United States and one that has the potential to affect an individual’s medical readiness. Within the military community, intimate relationships may be particularly vulnerable to occupation-stress that is specific to military operations. These demands might include frequent moves to undesirable locations or overseas, separation from extended family for unknown lengths of time, frequent variability in work schedule, long hours, career uncertainty, mission ambiguity, training environments meant to simulate varying operational environments, and risk that is inherent to the field. Although there are programs in place designed to support the family unit, the stress of multiple deployments, combat exposure, and exposure to traumatic events cause additional strain on the family unit as service members reintegrate into the home environment following the return home from a deployment. Deployments bring additional stress on the family unit as two-parent homes transition to one-parent homes while attempting to maintain their semi-regular schedules.