Montgomery Securities was an investment bank based in San Francisco, California, that specialized in high technology and health care sectors. The firm was founded in 1978 by Thom Weisel.

The bank was acquired by NationsBank Corporation on June 30, 1997. [1] It competed in the same geographic region and market sectors as Robertson Stephens (acquired by BankAmerica Corporation) and Hambrecht & Quist (now part of JPMorganChase).

Robertson Stephens was a San Francisco-based boutique investment bank that focused primarily on technology companies. The firm was closed by its parent company, FleetBoston in July 2002 as a result of the collapse of the technology sector and the end of the dot-com bubble.

Hambrecht & Quist (H&Q) was an investment bank based in San Francisco, California noted for its focus on the technology and Internet sectors. H&Q was founded by William Hambrecht and George Quist in California, in 1968. 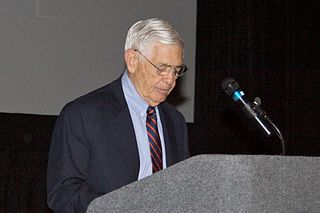 Hugh L. McColl Jr. is a fourth-generation banker and the former Chairman and CEO of Bank of America. Active in banking since around 1960, McColl was a driving force behind consolidating a series of progressively larger, mostly Southern banks, thrifts and financial institutions into a super-regional banking force, "the first ocean-to-ocean bank in the nation's history."

Montgomery Securities is the predecessor of Banc of America Securities. [6] [7]

Sandler O'Neill + Partners, L.P., is a full-service investment banking firm and broker-dealer specializing in the financial services sector. It is headquartered in New York City, and has offices in Boston, Chicago, San Francisco and Atlanta. The firm also operates a mortgage finance company and registered investment adviser based in Memphis. 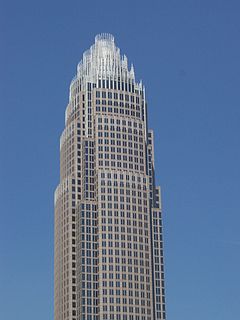 The Bank of America Corporation is an American multinational investment bank and financial services company based in Charlotte, North Carolina, with central hubs in New York City, London, Hong Kong, Minneapolis, and Toronto. Bank of America was formed through NationsBank's acquisition of BankAmerica in 1998. It is the second largest banking institution in the United States, after JPMorgan Chase. As a part of the Big Four, it services approximately 10.73% of all American bank deposits, in direct competition with Citigroup, Wells Fargo, and JPMorgan Chase. Its primary financial services revolve around commercial banking, wealth management, and investment banking. 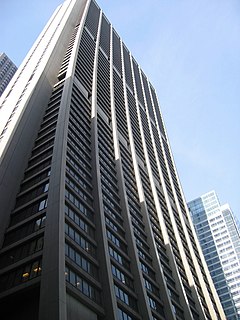 Bank One Corporation was the sixth-largest bank in the United States. It traded on the New York Stock Exchange under the stock symbol ONE. The company merged with JPMorgan Chase & Co. on July 1, 2004. The company had its headquarters in the Bank One Plaza in the Chicago Loop in Chicago, Illinois, now the headquarters of Chase's retail banking division.

FleetBoston Financial was a Boston, Massachusetts–based bank created in 1999 by the merger of Fleet Financial Group and BankBoston. In 2004 it merged with Bank of America; all of its banks and branches were converted to Bank of America.

NationsBank was one of the largest banking corporations in the United States, based in Charlotte, North Carolina. The company named NationsBank was formed through the merger of several other banks in 1991, and prior to that had been through multiple iterations. Its oldest predecessor companies had been Commercial National Bank (CNB), formed in 1874, and American Trust Company founded in 1909. In 1998, NationsBank acquired BankAmerica, and modified that better-known name to become Bank of America.

BankBoston was a bank based in Boston, Massachusetts, which was created by the 1996 merger of Bank of Boston and BayBank. One of its predecessor banks started in 1784, but the merged BankBoston was short-lived, being acquired by Fleet Bank in 1999. In 2005, FleetBoston was purchased by, and merged into, Bank of America of Charlotte, North Carolina.

Mayo A. Shattuck III is an American businessman and philanthropist. He currently serves as non-executive chairman of Chicago-based Exelon Corporation, co-chair of the Johns Hopkins University Capital Campaign and vice chairman of the board of Johns Hopkins Medicine.

The term CHARM Bank refers to an acronym popularly used in the 1990s to describe the top boutique investment banks of the decade.

Moody's Analytics is a subsidiary of Moody's Corporation established in 2007 to focus on non-rating activities, separate from Moody's Investors Service. It provides economic research regarding risk, performance and financial modeling, as well as consulting, training and software services. Moody's Analytics is composed of divisions such as Moody's KMV, Moody's Economy.com, Moody's Wall Street Analytics, the Institute of Risk Standards and Qualifications, and Canadian Securities Institute Global Education Inc.