NWA All Star Wrestling is a Canadian professional wrestling promotion, based in Vancouver, British Columbia. All-Star Wrestling folded in 1989 but returned in 2007 no longer affiliated with the National Wrestling Alliance Mark Vellios is the current owner.

Although other wrestling promotions existed in Vancouver prior to the early 1960s (particularly a predecessor of All Star's called Big Time Wrestling), All Star (an affiliate of the National Wrestling Alliance (NWA) for most of its existence) became the longest-lived and perhaps best-remembered of all promotions operating in the Vancouver area before or since. The promotion began coming into its own around the time CHAN-TV began broadcasting their TV program (also called All Star Wrestling) in 1962, when Gene Kiniski arrived in Vancouver and became a regular on the roster. At the time All Star began, the NWA British Empire heavyweight title was the top singles title in the Vancouver territory, [1] while the Pacific Coast tag team title initially served as the tag team championship (both titles were carried over from Big Time Wrestling); however, after the British Empire title was abandoned sometime after 1963 (when Kiniski last won it), All Star had no singles title of its own until 1970, when the Pacific Coast heavyweight title (which was first introduced in 1948 in Big Time Wrestling, but became inactive around 1958) was reactivated.

All Star started becoming a serious force in the Pacific Northwest wrestling scene during Kiniski's reign as NWA World Heavyweight champion (which he won from Lou Thesz in 1966), when he and Sandor Kovacs, along with Portland promoter Don Owen, joined forces to promote the territory at the start of 1968, [2] forming Northwest Wrestling Promotions as the parent company to run All Star. During this time, the promotion shared talent (including many of the sport's big names of the time) with Owen's nearby NWA affiliate Pacific Northwest Wrestling while also developing local talent. At the same time, the All Star Wrestling program began to be seen across Canada via syndication. Ron Morrier was the original host of the TV show and served in that capacity until his death on August 6, 1981; after that, former CFUN disk jockey Ed Karl took over as the host for the remainder of the show's run on CHAN-TV.

Kovacs promoted his final All Star show on January 17, 1977, [2] before selling his share in the promotion to Al Tomko, a veteran wrestler and former Winnipeg promoter for the AWA. While the promotion managed to hold steady through the late-1970s following the sale, All Star began going into decline by the early-1980s, due partly to the aging Tomko (who was physically past his prime and had poor wrestling skills) pushing himself as the company's top star, and partly to the rise of the WWF around the middle of the decade (a situation which actually affected many other North American promotions besides All Star). Late in the promotion's NWA affiliation, during episodes of All Star Wrestling, Tomko and Ed Karl would also present and commentate on highlight clips of matches from fellow NWA affiliates Central States Wrestling and Jim Crockett Promotions, as well as matches taped at All Star's main house shows in Vancouver and Cloverdale.

Noticing the decline of the promotion, Kiniski sold his ownership stake and got out sometime around 1983, after which he began promoting shows in Vancouver in association with Stampede Wrestling and the AWA. In late 1985, Tomko withdrew All Star from the NWA and created a new sanctioning body for the company called the Universal Wrestling Alliance; those changes did nothing to reverse All Star's fortunes, however, and the promotion would eventually cease operations, holding its final event in Elk Grove, British Columbia on July 2, 1989. Mauro Ranallo, who went on to become a radio announcer for Abbotsford station CFVR (now CKQC-FM) and the TV play-by-play announcer for Pride Fighting Championships, Stampede Wrestling, King of the Cage, KVOS-TV's NWA Top Ranked Wrestling, and most recently WWE Smackdown , got his start as an on-camera personality with All Star Wrestling while still in his teens, late in the show's run.

The American Wrestling Association (AWA) was an American professional wrestling promotion based in Minneapolis that ran from 1960 to 1991. It was owned and founded by Verne Gagne and Wally Karbo. The territory was originally part of the National Wrestling Alliance (NWA), becoming an independent territory in the late 1950s.

The National Wrestling Alliance (NWA) is an American professional wrestling promotion and former governing body operating via its parent company Lightning One, Inc.

Jack Barton Adkisson Sr., better known by his ring name Fritz Von Erich, was an American professional wrestler, wrestling promoter, and the patriarch of the Von Erich family. He was also the owner of the World Class Championship Wrestling territory. 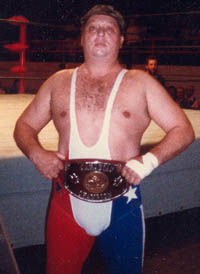 Al Tomko was a Canadian professional wrestler and wrestling promoter. 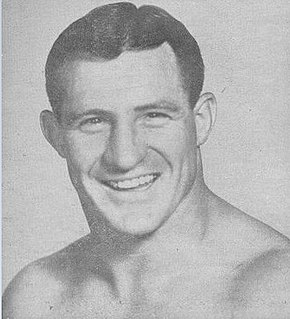 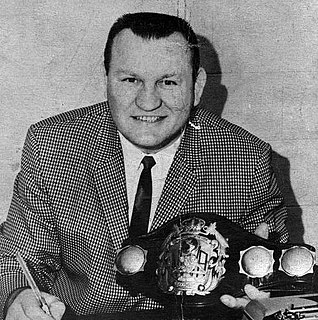 Don Stansauk was an American professional wrestler and actor, known by his ring name, Hard Boiled Haggerty. He was previously a professional American football player, and became a successful character actor after his wrestling career.

Pacific Northwest Wrestling (PNW) is the common name used to refer to several different professional wrestling companies, both past and present, based in Portland, Oregon, United States. The first such company was founded by Herb Owen in 1925. It was the Northwest territory of the National Wrestling Alliance from the Alliance's inception in 1948 until 1992. The area was brought to its prime by Herb's son, Don Owen, and this version of Pacific Northwest Wrestling saw many of the top names in the business come through on a regular basis. The Pacific Northwest was considered one of the main pro wrestling territories from the 1960s to the 1980s.

The 1980s professional wrestling boom was a surge in the popularity of professional wrestling in the United States and elsewhere throughout the 1980s. The expansion of cable television and pay-per-view, coupled with the efforts of promoters such as Vince McMahon, saw professional wrestling shift from a system controlled by numerous regional companies to one dominated by two nationwide companies: McMahon's World Wrestling Federation and Ted Turner's World Championship Wrestling (WCW). The decade also saw a considerable decline in the power of the National Wrestling Alliance (NWA), a cartel which had until then domineered the wrestling landscape, and in the efforts to sustain belief in the verisimilitude of wrestling.

Kurt and Karl Von Steiger were the ring names of professional wrestlers Lorne Corlett and Arnold Pastrick worked under for most of their careers. The Von Steiger gimmick was that of two German villains, called heels, despite both wrestlers hailing from Winnipeg, Manitoba, Canada. Arnold Pastrick used the name Kurt Von Steiger, and Lorne Corlett worked as Karl Von Steiger. The Von Steigers are best known for competing in Pacific Northwest Wrestling in Portland, Oregon between 1968 and 1973 but also competed in Tennessee, San Francisco, Stampede Wrestling, Australia, the American Wrestling Alliance and the Carolina territory. 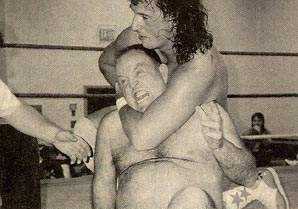 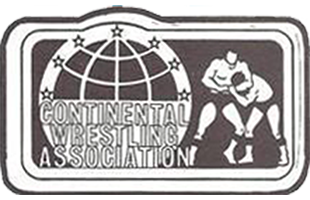 Heart of America Sports Attractions, also known as the Midwest Wrestling Association, Central States Wrestling and the World Wrestling Alliance, was an American professional wrestling promotion that ran shows mainly in Kansas, Missouri, Nebraska and Iowa. Due to the promotion's main office and base of operations being in Kansas City, Missouri the territory was often referred to simply as "Kansas City". The promotion existed from July 1948 until it closed in 1988. The territory was one of the original territories of the National Wrestling Alliance with two of the six "founding fathers" of the NWA promoting in it.

Robert F. Jeaudoin was an American professional wrestler, best known under the ring name of "Hangman" Bobby Jaggers. Most of his renown as a wrestler came from his appearances in various National Wrestling Alliance-affiliated promotions. In particular, he found his greatest success in Championship Wrestling from Florida and Pacific Northwest Wrestling, the latter near his hometown of Vancouver, Washington. His wrestling gimmick was of a cowboy from Kansas, where he spent the later years of his life.

Charles B. Sprott is a Canadian former professional wrestler, better known by his ring names Ricky Hunter and the masked wrestler The Gladiator. He was best known for his title-winning success in Championship Wrestling from Florida in the late 1960s, and for his stint from the mid-1980s in the World Wrestling Federation. 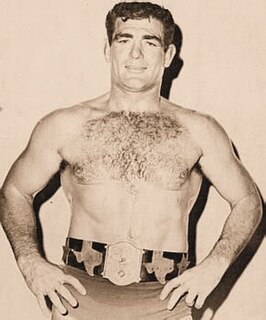