Nancy Banks-Smith (born 1929) is a British television and radio critic, who has spent most of her career writing for The Guardian .

Born in Manchester and raised in a pub, [1] she was educated at Roedean School.

Banks-Smith began her journalistic career in 1951 as a reporter at the Northern Daily Telegraph . In 1955, after a brief stint at the women's section of the Sunday Mirror , she moved to the Daily Herald as a reporter. She worked for the Daily Express from 1960 to 1965 as a feature writer, moving to be a TV critic for The Sun in 1965. She left the newspaper in 1969 when it was bought by Rupert Murdoch. [2]

Banks-Smith began writing for The Guardian in 1970, with her television column becoming a leading feature of the newspaper. She has remained with the paper for 50 years, [3] though by 2010 no longer wrote daily reviews. [2] Until 2017 she wrote a monthly column for the paper entitled "A month in Ambridge", reviewing recent developments in the radio soap opera The Archers .

In 1970 she was recommended for the Order of the British Empire, which she declined. [4]

Victor Lewis-Smith is a British film, television and radio producer, a TV and restaurant critic, a satirist and newspaper columnist. He is Executive Producer of the ITV1 National Food & Drink Awards. He is a music graduate of the University of York. He is a long-standing contributor to Private Eye fortnightly magazine. He owns an 18th-century chateau in Northern France. 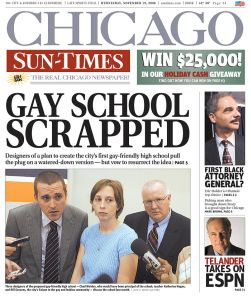 The Chicago Sun-Times is a daily newspaper published in Chicago, Illinois, United States. It is the flagship paper of the Sun-Times Media Group, with the second biggest circulation in Chicago. They normally endorse Democratic candidates, but they did endorse Republican Bruce Rauner for Governor of Illinois twice.

Julie Burchill is an English journalist, writer and broadcaster who describes herself as a "militant feminist". Beginning as a staff writer at the New Musical Express at the age of 17, she has since contributed to newspapers such as The Daily Telegraph, The Sunday Times and The Guardian. She has been involved in legal actions resulting from the contents of her writing on several occasions. Burchill is also an author and novelist, and her 2004 novel Sugar Rush was adapted for television.

Melvyn Bragg, Baron Bragg,, is an English broadcaster, author and parliamentarian. He is best known for his work with ITV as editor and presenter of The South Bank Show (1978–2010), and for the BBC Radio 4 discussion series In Our Time.

Dorothy Mae Kilgallen was an American journalist and television game show panelist. After spending two semesters at the College of New Rochelle, she started her career shortly before her 18th birthday as a reporter for the Hearst Corporation's New York Evening Journal. In 1938, she began her newspaper column "The Voice of Broadway", which eventually was syndicated to more than 140 papers. In 1950, she became a regular panelist on the television game show What's My Line?, continuing in the role until her death.

Heather Mallick is a Canadian columnist, author and lecturer. She has been a staff columnist for the Toronto Star since 2010, writing a news column on Saturday and on the opinion page on Monday and Wednesday. She writes about feminism, news and politics.

Mary Elizabeth Smith was an American gossip columnist. She was known as "The Grand Dame of Dish". During her career, she wrote columns for the New York Daily News, The Washington Post, and Cosmopolitan. She worked exclusively with Fox Broadcasting Company with Roger Ailes. From 1995 to 2005, Smith worked with Newsday.

Eugene Shalit is an American film and book critic. He filled those roles on NBC's The Today Show from January 15, 1973, after starting part-time in 1970, until his retirement on November 11, 2010. He is known for his frequent use of puns, his oversized handlebar moustache and fuzzy hair, and for wearing colorful bowties.

Antonia Zerbisias is a Canadian journalist associated with the Toronto Star from 1989 until she took early retirement from the paper on 31 October 2014. She has been a reporter and TV host for the Canadian Broadcasting Corporation, as well as the Montreal correspondent for the trade paper, Variety. She was nominated for ACTRA awards for her documentary writing in 1980 and 1981, and won the 1996 National Newspaper Award for critical writing for her columns about magazines. Currently a freelancer, she regularly writes opinion columns for Al Jazeera English and the Toronto alternative weekly, Now.

Agony is a British sitcom that aired on ITV from 1979 to 1981. Made by London Weekend Television, it stars Maureen Lipman as Jane Lucas who has a successful career as an agony aunt but whose own personal life is a shambles. It was created by Len Richmond and real-life agony aunt Anna Raeburn, both of whom wrote all of the first series. The second and third series were written by Stan Hey and Andrew Nickolds. 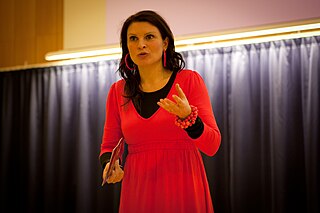 Television criticism is the act of writing or speaking about television programming with a view to evaluating its worth, meaning and other aspects. Such criticism can be found in daily newspapers, on culture discussion shows, and in specialist books and periodicals, all of which are in direct competition for audience from television.

Grace Dent is an English columnist, broadcaster and author. Dent is a restaurant critic for The Guardian and from 2011 to 2017 wrote a restaurant column for the Evening Standard. She is a regular critic on the BBC's MasterChef UK and makes frequent appearances in Channel 4's television series Very British Problems.

Rachel Cooke is a British journalist and writer.