New Year is a 1989 Malayalam movie which was a remake of 1985 Hindi movie Aitbaar . The movie stars Suresh Gopi, Urvasi, Jayaram, Silk Smitha and Sukumaran.

The crux of the movie is same as that of a 1954 English movie named Dial M for Murder. It begins with Menon travelling in a taxi. The car engine overheats and the driver gets out of the car to investigate. Menon gets out of the car, and is murdered by the driver. Flashback Ajith is Menon's nephew who is in love with Menon's daughter, Rekha. Ajith gets a job in the military which Menon disallows. Ajith takes the job despite Menon's disapproval and leaves town. A new suitor named Vinod appears, and he soon becomes Menon's favourite. Menon arranges the marriage of Rekha to Vinod, despite her disapproval. Vinod is a selfish criminal who wants to take Menon's property. He has a girlfriend named Daisy who is a dancer. Later, it is revealed that Vinod was the one who hired Robert to kill Menon when he comes to know of his deeds. Ajith gets a transfer to Ooty and visits Rekha. Seeing her predicament, he feels pity. After he leaves, Ajith writes a letter to Rekha to tell her that he still loves her. Rekha hides the letter from Vinod but Vinod finds it causing her to start doubting Rekha. Vinod and Rekha go shopping and Rekha misplaces her handbag. Knowing that the handbag contains Ajith's letter, Rekha rushes to retrieve it where she finds another letter asking for 50000 Rs in return of the letter. Rekha leaves the money in a lift as told in the letter, but does not gets her letter back. After this incident, Vinod confirms Rekha's affair. He hires Robert again to kill Rekha by showing him the pictures taken by him when he killed Menon. Robert enters the house on New Year's Eve when Ajith and Vinod go to a party. Robert attacks Rehka and she kills him with a pair of scissors. Rehka is found guilty of murder, for which she is sentenced to 14 years in prison. Upon reflection, the Circle Inspector doubts Vinod's story and raids the house. He finds the photographs and shows them to Rekha and Ajith. When Vinod discovers that he is caught, he commits suicide.

Chinthamani Kolacase is a 2006 Indian Malayalam-language legal thriller film directed by Shaji Kailas with Suresh Gopi in the lead role and Bhavana playing the central character, this film narrates the story of a Lal Krishna Viradiyar, a lawyer and his style of law enforcement and criminal verdict for the criminals after the court sessions. 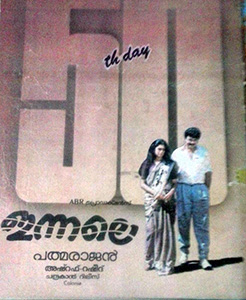 Innale (transl. Yesterday) is a 1990 Malayalam Psychological Romantic drama film, written and directed by P. Padmarajan with Shobhana, Jayaram, and Srividya in pivotal roles. Suresh Gopi appears in a cameo role.Director Ranjith recognises it as one of his favourite films. Suresh Gopi's role as Dr. Narendran was critically acclaimed and considered as one of his finest memorable performances in his career. 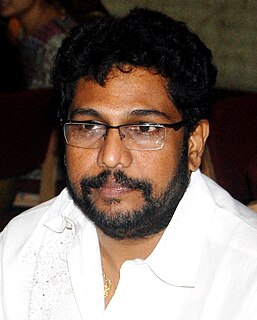 Twenty:20 is a 2008 Indian Malayalam-language action thriller film written by Udayakrishna and Siby K. Thomas and directed by Joshiy. The film stars Mohanlal, Mammootty, Suresh Gopi, Jayaram and Dileep. The film was produced and distributed by actor Dileep through Graand Production and Manjunatha Release. The film was produced on behalf of the Association of Malayalam Movie Artists (AMMA) as a fundraiser to financially support actors who are struggling in the Malayalam film industry. All the actors in AMMA worked without payment in order to raise funds for their welfare schemes. The film features an ensemble cast, which includes almost all artists in AMMA. The music was composed by Berny-Ignatius and Suresh Peters.

Moonnam Mura is a 1988 Indian Malayalam-language action thriller film directed by K. Madhu and written by S. N. Swamy. Starring Mohanlal, Suresh Gopi, Lalu Alex, Revathi, and Mukesh. The plot deals with a terrorist group kidnapping a group of political individuals who were vacationing, and the followed up rescue operation of the police led by Ali Imran.

Aayushkalam (transl. Lifetime) is a 1992 Indian Malayalam-language ghost film directed by Kamal and written by Vinu Kiriyath and Rajan Kiriyath. Starring Jayaram, Mukesh, Sreenivasan, Sai Kumar and Gavin Packard. The film was a commercial success at the box office. Aayushkalam was remade in Hindi as Hello Brother.

Poovinnu Puthiya Poonthennal is a 1986 Indian Malayalam-language film directed by Fazil and produced by Swargachitra Appachan, starring Mammootty, Suresh Gopi, Babu Antony, Nadiya Moidu and Baby Sujitha. It was later remade in Tamil as Poovizhi Vasalile, in Telugu as Pasivadi Pranam, in Kannada as Aapadbandhava and in Hindi as Hatya, Unofficial remade in Bengali Bangladesh as Khotipuron and in Sinhalese as Wada Barinam Wadak Na. The three remakes each had a different ending. Babu Antony played the role of the killer along with Suresh Gopi as his boss and Sujitha played the role of deaf and mute boy in all the five versions.

January Oru Orma is a 1987 Indian Malayalam film, directed by Joshiy. The film stars Mohanlal, Suresh Gopi, Karthika and Jayabharathi in the lead roles. The film has musical score by Ouseppachan.

Unnikrishnante Aadyathe Christmas is a 1988 Indian Malayalam film, directed by Kamal and produced by Kitho, John Paul and Kaloor Dennis. The film stars Jayaram, Suresh Gopi, Sumalatha and Innocent in the lead roles. The film has musical score by Johnson. The film is based on a short story by Kakkanadan.

Mafia is a 1993 Indian Malayalam- language action crime film, directed by Shaji Kailas and scripted by Renji Panicker. It stars Suresh Gopi, Vikram, Janardhanan, Tiger Prabhakar, Babu Antony, Vijayaraghavan and Geetha, this film revolved around the Bangalore underworld. The film was successful at the box office.

Mahathma is a 1996 Malayalam crime-drama, directed by Shaji Kailas, with Suresh Gopi in the lead role. Ganesh Kumar, Devan, Rajan P. Dev, Biju Menon and Ramya Krishnan appear in supporting roles; this film revolved the growth of an underworld don. The story is unfolded in flashback, travelling through the memories of Devadevan, the protagonist.

Pavam Pavam Rajakumaran is a 1990 Malayalam film directed by Kamal and written by Sreenivasan. The film is based on the short story Kottu Baakki by S. K. Pottekkad. This film stars Sreenivasan, Rekha, Siddique, Kottayam Santha, Jagadish and Maniyanpilla Raju. Jayaram appears in an extended guest role in the film, which was a huge hit at the box office. The sub-plots of the movie were used in the 1991 Tamil movie Gopura Vasalile.

Randam Varavu is a 1990 Indian Malayalam-language crime thriller film, directed by K. Madhu and written by John Paul. The film stars Jayaram, Rekha, Jagathy Sreekumar and Sukumaran. The film has musical score by Shyam.This film was a box office disaster. 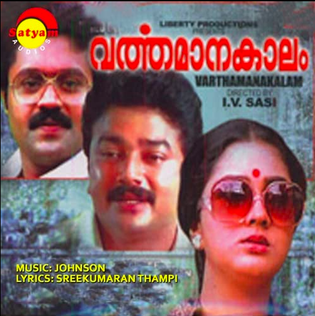 Varthamanakaalam is a 1990 Indian Malayalam film, directed by I. V. Sasi and produced by Liberty Basheer. The film stars Suresh Gopi, Jayaram, Balachandra Menon and Urvashi in the lead roles. The film has musical score by Johnson. 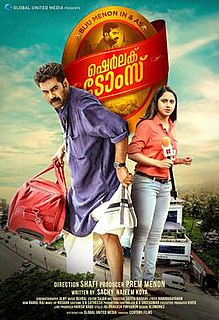 Sherlock Toms is a 2017 Indian Malayalam-language comedy film directed by Shafi and written by Sachy. The film stars Biju Menon, Miya, Srinda Arhaan, Salim Kumar, and Kalabhavan Shajohn. It was produced by Prem Menon under his Global United Media. The plot follows the encounters of Thomas, an Indian Revenue Service employee, who is fondly Sherlock Toms due to his shrewd intelligence and keen observation skills. The film was released on 29 September 2017.

Ira (transl. Victim) is a 2018 Indian Malayalam-language action crime thriller film directed by Saiju S. S. and produced by Vysakh and Udaykrishna under the banner of Vysakh Udaykrishna Productions, and distributed by Udaykrishna. It was written by Naveen John, and starring Unni Mukundan and Gokul Suresh with Miya, Niranjana, Lena, Kailash, Shanker Ramakrishnan and Dinesh Kollappally in supporting roles. Principal photography began on 1 November 2017. The film was released in India on 16 March 2018.It was dubbed into hindi as mera badla revenge 3