The New York Festival of Song (NYFOS) presents an annual series of concerts in New York City dedicated to the art of song, classical, modern and popular. In addition, this organization commissions new works and recordings, including the Grammy Award-winning recording of Leonard Bernstein's Arias and Barcarolles (Koch), and the Grammy-nominated recording of Ned Rorem's Evidence of Things Not Seen (1997, New World Records).

The festival was founded in 1988 by Steven Blier and Michael Barrett.

For the 100th anniversary of the Juilliard School in January 2006, NYFOS collaborated on a program featuring "100 Years of Juilliard Composers in Song".

In December 2008, Bridge Records released an original cast recording of Bastianello / Lucrezia, featuring soprano Lisa Vroman, mezzo-soprano Sasha Cooke, tenor Paul Appleby, baritone Patrick Mason and bass Matt Boehler, with pianists Steven Blier and Michael Barrett. With a score by John Musto and a libretto by Mark Campbell, Bastianello is a family fable of love and folly based on a poignant Italian folk tale. In March 2008, it had its World Premiere, along with William Bolcom's comic piece Lucrezia (a version of Machiavelli ′s La Mandragola , libretto also by Mark Campbell) at Weill Recital Hall at Carnegie Hall, commissioned and presented by the New York Festival of Song. [1]

NYFOS has created and premiered over a hundred unique programs, [1] many of which have toured the United States. Some that have been favorably reviewed and/or frequently reprised:

At Harlem's Height, premiered in 2001, explores the music of the Harlem Renaissance, with songs by Eubie Blake, Fats Waller, William Grant Still, Florence Price and others.

Songs of Peace and War, premiered in 2001, shortly after the World Trade Center attack.

Dvořák and the American Soul, premiered in 2002, juxtaposes songs by Czech composer Antonín Dvořák and those of his African-American students from the period in the 1890s when he was teaching at the National Conservatory in New York, showing how each influenced the other.

Blok and Akhmatova: Poets Without Heroes, premiered in 2005, explores music composed around the work of these Russian poets.

The Mandrake is a satirical play by Italian Renaissance philosopher Niccolò Machiavelli. Although the five-act comedy was published in 1524 and first performed in the carnival season of 1526, Machiavelli likely wrote The Mandrake in 1518 as a distraction from his bitterness at having been excluded from the diplomatic and political life of Florence following the 1512 reversion to Medici rule. Some scholars read the play as an overt critique of the House of Medici; and some scholars assert that the play is a mirror to his political treatises. However, Machiavelli set the action in 1504 during the period of the Florentine Republic in order to express his frustrations without fear of censure from patrons already ill-disposed towards him and his writing.

Renée Lynn Fleming is an American soprano, known for performances in opera, concerts, recordings, theater, film, and at major public occasions. A recipient of the National Medal of Arts, Fleming has been nominated for 17 Grammy Awards and has won four times. Other notable awards have included the Chevalier de la Légion d'Honneur from the French government, Germany's Cross of the Order of Merit, Sweden's Polar Music Prize and honorary membership in England's Royal Academy of Music. Unusual among artists whose careers began in opera, Fleming has achieved name recognition beyond the classical music world.

Lorraine Hunt Lieberson was an American mezzo-soprano. She was noted for her performances of both Baroque era and contemporary works. Her career path to becoming a singer was unconventional – formerly a professional violist, Lieberson did not shift her full-time focus to singing until she was in her thirties. 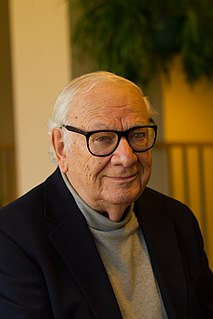 Dominick Argento was an American composer known for his lyric operatic and choral music. Among his best known pieces are the operas Postcard from Morocco, Miss Havisham's Fire, The Masque of Angels, and The Aspern Papers. He also is known for the song cycles Six Elizabethan Songs and From the Diary of Virginia Woolf; the latter earned him the Pulitzer Prize for Music in 1975. In a predominantly tonal context, his music freely combines tonality, atonality and a lyrical use of twelve-tone writing. None of Argento's music approaches the experimental, stringent avant-garde fashions of the post-World War II era.

Michael Nathaniel Hersch is an American composer and pianist.

Isabel Leonard is an American mezzo-soprano opera singer based in New York City. She is of Argentine ancestry on her mother's side.

The Cassatt String Quartet was founded in 1985. Originally the first participants in Juilliard's Young Artists Quartet Program, the Quartet has gone on to win many teaching fellowships and awards and has toured internationally. Named after impressionist painter Mary Cassatt, the quartet is based in New York City.

David Schiff is an American composer, writer and conductor whose music draws on elements of jazz, rock, and klezmer styles, showing the influence of composers as diverse as Stravinsky, Mahler, Charles Mingus, Eric Dolphy and Terry Riley. His music has been performed by major orchestras and festivals around the United States and by soloists David Shifrin, Regina Carter, David Taylor, Marty Ehrlich, David Krakauer, Nadine Asin and Peter Kogan. He is the author of books on the music of Elliott Carter, George Gershwin and Duke Ellington. His work has been honored by the League-ISCM National Composers Competition award and the ASCAP-Deems Taylor award for his book on Elliott Carter.

Tom Cipullo is an American composer. Known mostly for vocal music, he has also composed orchestral, chamber, and solo instrumental works. His opera, Glory Denied, has been performed to critical acclaim in New York, Washington, and Texas.

Steven Richman is a GRAMMY Award-nominated American conductor and writer. He is music director of Harmonie Ensemble/New York, which he founded in 1979, and the Dvořák Festival Orchestra of New York.

Steven Blier is an American pianist, recital accompanist, musicologist, and, since 1992, a faculty member in the Department of Vocal Arts at The Juilliard School. in New York City. He is the Artistic Director and Co-founder of the New York Festival of Song (NYFOS) with former Chief Executive and General Director of Caramoor, Michael Barrett. Blier was also a casting adviser at the New York City Opera and a regular performer at Wolf Trap and Caramoor. He has been active in encouraging young recitalists at summer programs, including the Wolf Trap Opera Company, the Steans Music Institute at Ravinia, the Santa Fe Opera, and the San Francisco Opera Center. He has written articles for Opera News and The Yale Review.

Mark Campbell is a New York-based librettist and lyricist whose operas have received both a Pulitzer Prize in Music and a GRAMMY Award. Mark began writing for the stage as a musical theatre lyricist, but turned to libretto-writing after he premiered Volpone, his first full-length opera in 2004 at Wolf Trap Opera Company.