Nicola Cornick (born 1964 in Bradford Yorkshire, England) is a British writer of historical romance novels and more recently, timeslip mysteries that merge multiple genres, including historical fiction, romance, suspense, adventure, crime, science fiction/fantasy and the supernatural. Her books have been translated into over 40 languages and she has won a number of awards.She is also a historian specialising in public history. She acts as a volunteer guide and historian at Ashdown House, a 17th-century National Trust hunting lodge in Oxfordshire and is a trustee of the Friends of Lydiard Park, Swindon and of the Wantage Literary Festival.

Nicola Cornick was elected the twenty-eight chair (2017–2019) of the Romantic Novelists' Association, [1] and is a member of the Society of Authors and the Historical Writers' Association. She is a speaker on various writing and history-related topics and is RNA archivist.

Nicola Cornick was born in Yorkshire, England. She obtained an honours degree in Medieval History from London University. She worked for many years in university administration, becoming Assistant Academic Registrar and Operations Manager at Cranfield University. She returned to college in Oxford, to study at Ruskin College. [2] gaining a master's degree with distinction in Public History.

She published her first novel in 1998 for Mills & Boon (reedited as Harlequin Enterprises in USA), specializing in romances set in the British Regency. In 2006 she moved to HQN Books in the United States and published longer historical romances with settings ranging from 19th century Scotland to the Arctic. In 2014 she signed with Harper Collins HQ to write highly acclaimed multiple time period historical mysteries.

Nicola Cornick's books have been shortlisted for a number of awards including the Romance Writers of America RITA Awards and the RNA awards, and have won the Reader's Choice Award, the Laurel Wreath and the LORIES. She has been Wiltshire Libraries Writer in Residence and has spoken at the Oxford Literary Festival on the history and development of the romance novel and at Sharjah International Book Fair on the appeal of the historical novel. Her works are recognised for their historical research and well-observed characterisation.

She lives in Oxfordshire, England.

The Brides of Fortune Series

Scandalous Women of the Ton Series

Julie Pottinger, better known by her pen name Julia Quinn, is a best-selling American historical romance author. Her novels have been translated into 29 languages, and she has appeared on the New York Times Bestseller List 19 times. Her Bridgerton series of books has been adapted for Netflix by Shonda Rhimes under the title Bridgerton.

Mary Balogh is a Welsh-Canadian novelist writing historical romance, born and raised in Swansea. In 1967, she moved to Canada to start a teaching career, married a local coroner and settled in Kipling, Saskatchewan, where she eventually became a school principal. Her debut novel appeared in 1985. Her historical fiction is set in the Regency era (1811–1820) or the wider Georgian era (1714–1830).

Mary Josephine Beverley was a prolific English-Canadian writer of historical and contemporary romance novels from 1988 to 2016.

Stephanie Laurens, is a best-selling Australian author of romance novels.

Mary Jo Putney is a best-selling American author of over twenty-five historical and contemporary romance novels. She has also published romantic fantasy novels as M.J. Putney. Her books are known for their unusual subject matter, including alcoholism, death, and domestic abuse. 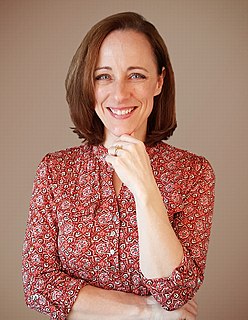 Gaelen Foley is an American author best known for writing romance novels set in the Regency era. She has also been self-publishing middle grade fantasy books under the pen name E.G. Foley since 2012. Her books have been in the USA Today bestseller list regularly since 2000 and the New York Times bestseller list since 2008. Gaelen's novels have been translated into 20+ foreign languages and have sold millions of copies worldwide.

Carla Sue Kelly is an American writer in the Regency romance genre. She is the author of over forty books and short stories. Her books are what romance readers call "keepers," i.e. books they keep in their private collections, and accordingly they can be hard to find. Renowned for what she calls "dukeless" regencies, her stories often revolve around ordinary people solving their own problems. While many Regency romances feature soldiers returned from the Napoleonic Wars, several of Kelly's books include soldiers and sailors actively involved in the Peninsular campaign and in the naval blockade that prevented France from invading England, bringing this war to life in an unforgettable way. However, her regencies only reflect a part of her writing interests. She also has a strong interest in the American West, which is reflected in her earliest published works and in her non-fiction. Since 2011, Kelly, who has a Mormon background, has written four historical romance novels that focus on the lives of young Mormon women: Borrowed Light, Enduring Light, My Loving Vigil Keeping, and Safe Passage.

Brenda Hiatt is an American, New York Times and USA Today bestselling author of romantic adventure novels, including traditional Regency romance, time travel romance, historical novels, contemporary humorous mystery, and most recently young adult science fiction romance. She has authored and published over 20 such novels in a writing career that started in 1988.

Susan Tatum Woodhouse, known by her pseudonym Liz Carlyle, is an American writer of romance novels since 1999, primarily of historical romances.

Shane Bolks AKA Shana Galen is an American author of contemporary fiction and historical romance novels.

The RITA Award was the most prominent award for English-language romance fiction from 1990 to 2019. It was presented by the Romance Writers of America (RWA). The purpose of the RITA Award was to promote excellence in the romance genre by recognizing outstanding published novels and novellas. It was named for the RWA's first president, Rita Clay Estrada. It was not awarded in 2020, and was replaced by the Vivian Award, awarded for the first time in 2021.

Diane Gaston is an American author of Regency romance novels. She has also written under the pen name Diane Perkins. 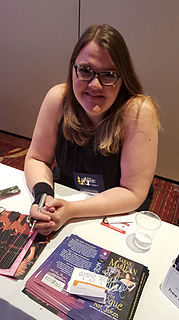 Sarah MacLean is a New York Times bestselling American author of young adult novels and romance novels. Her first adult romance novel, Nine Rules to Break When Romancing a Rake debuted on the New York Times Bestseller List, where it stayed for four weeks. Since then, all of her adult romance novels have been on the New York Times and USA Today bestseller lists. Since February 2014, MacLean has written a monthly romance novel review column for The Washington Post. She is a two-time winner of the Romance Writers of America RITA Award for Best Historical Romance for A Rogue by Any Other Name in 2013 and No Good Duke Goes Unpunished in 2014. She's also the co-host of the Fated Mates podcast.

Cheryl Bolen is an American author, educator and journalist. She is known for writing more than 30 historical romance and romantic suspense novels, many of them set among Regency aristocrats in early 19th century England.

Louise Allen is the pseudonym used by Melanie Hilton a British writer of romance novels since 1993, she started writing in collaboration with a friend under the pen name of Francesca Shaw. Her novels The Piratical Miss Ravenhurst in 2011 and Scandal’s Virgin in 2014 won the Love Story of the Year by the Romantic Novelists' Association.

Melinda Hammond is an awarded British writer of romance novels since 1980, she also uses the pseudonym of Sarah Mallory.

Manda Collins is an author of romance novels. Most of her books are regency romances, but she has also written a contemporary romance novels novella, Legally Yours.