The Norwegian Press Association (Norwegian : Norsk Presseforbund, NP) is Norwegian association established in 1910, for press people with journalism as their main profession. [1] Among its members are the Norwegian Union of Journalists, the Association of Norwegian Editors, Norsk Lokalradioforbund and the Norwegian Media Businesses' Association. [1]

Dagfinn Høybråten is a Norwegian politician. He was the leader of the Christian Democratic Party 2004–2011. He was also Parliamentary leader from 2005 when he was elected as Member of Parliament representing Rogaland. He was Vice President of the Norwegian Parliament from 2011 to 2013. He was President of the Nordic Council in 2007. Høybråten was granted leave from his duty as Member of Parliament from March 2013 to take up the position as Secretary General of the Nordic Council of Ministers. He was elected board member of the GAVI Alliance in 2006 and Chair of the Board from 2011 to 2015. 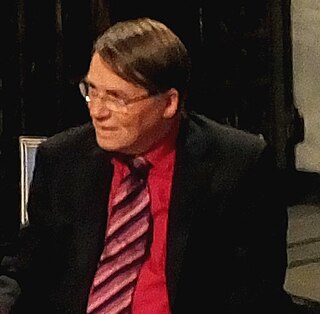 Gunnar Johan Stålsett is a Norwegian theologican and politician. He was leader of the Centre Party 1977–1979, general secretary of the Lutheran World Federation 1985–1993 and bishop of Oslo, in the Church of Norway 1998–2005.

Color Line Stadion is an association football stadium in Ålesund, Norway, and the home of 1. divisjon side Aalesunds FK. It was inaugurated in April 2005 and cost NOK 160 million to build. It is referred to as Aalesund Stadion by UEFA, as naming rights arrangements is not included during UEFA competitions.

Asbjørn Halvorsen, nicknamed Assi, was a Norwegian footballer, who played as a centre-half for Sarpsborg FK and Hamburger SV. He was capped 19 times playing for Norway, and was a part of the Norwegian team who competed in the 1920 Summer Olympics. He was later Secretary general of the Norwegian Football Association, and acted as head coach of the Norwegian national team. He is regarded as the architect behind the Norwegian "Bronze Team" that finished third in the 1936 Olympics.

Per Andreas Hildhe Kleppe was a Norwegian economist and politician for the Labour Party.

The Norwegian Association for Women's Rights is a Norwegian nonpartisan political advocacy organisation and Norway's oldest and preeminent women's and girls' rights organisation. NKF works "to promote gender equality and women's and girls' human rights through political and legal reform within the framework of liberal democracy". It is liberal feminist in orientation and has had a central role in the adoption of all major gender equality legislation and reforms since 1884. NKF stands for an inclusive and progressive feminism grounded in liberal values, and has always been open to both women and men. It consists of a national-level association as well as regional chapters based in the larger cities, and is led by a national-level executive board.

Oscar Ihlebæk was a Norwegian newspaper editor and resistance member.

The Norwegian Bridge Federation founded in 1932, is the national body for bridge in Norway.

A Town Betrayed is a 2010 Norwegian documentary about the prelude of the Srebrenica massacre (1995), written and directed by journalists Ola Flyum and David Hebditch and produced by Fenris Films, NRK, among others. It was shown on NRK's Brennpunkt on 26 April 2011 and SVT on 28 August 2011.

Elin Floberghagen is a Norwegian journalist and organizational leader.