Judges of the court of common pleas are elected to six-year terms on a nonpartisan ballot, although candidates may choose to run in partisan primary elections. In order to be appointed or elected to the court, a person must be an attorney with at least six years of experience in the practice of law.

In the United States, a state court has jurisdiction over disputes with some connection to a U.S. state. State courts handle the vast majority of civil and criminal cases in the United States; the much smaller in case load and personnel, United States federal courts, handle different types of cases. 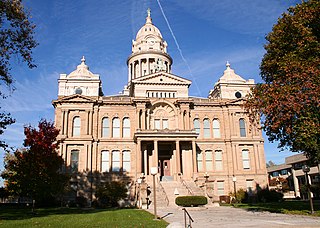 Ohio county government is the structure of official managerial and legal bodies of the counties of Ohio, USA. It is marked by a loose organization and a diffusion of power, the basic framework not having been changed since the nineteenth century. The Ohio Constitution allows counties to set up a charter government as many cities and villages do, but only Summit and Cuyahoga counties have done so. Counties operating under a constitutional government do not possess home rule powers and can do only what has been expressly authorized by the Ohio General Assembly. However, Article X of the Ohio Constitution gives county government benefits similar to those conferred on cities and villages under the home rule amendments of 1912.

A juvenile court is a tribunal having special authority to pass judgements for crimes that are committed by children or adolescents who have not attained the age of majority. In most modern legal systems, children or teens who commit a crime are treated differently from legal adults that have committed the same offense.

Marshall v. Marshall, 547 U.S. 293 (2006), is a case in which the United States Supreme Court held that a federal district court had equal or concurrent jurisdiction with state probate (will) courts over tort claims under state common law. The case drew an unusual amount of interest because the petitioner was Playboy Playmate and celebrity Anna Nicole Smith. Smith won the case, but unsolved issues regarding her inheritance eventually led to another Supreme Court case, Stern v. Marshall. She died long before that case was decided.

The Judiciary of Colorado is established and authorized by Article VI of the Colorado Constitution as well as the law of Colorado. The various courts include the Colorado Supreme Court, Colorado Court of Appeals, Colorado district courts, Colorado county courts, Colorado water courts, and municipal courts. The administration of the state judicial system is the responsibility of the Chief Justice of the Colorado Supreme Court as its executive head, and is assisted by several other commissions. In Denver, the county and municipal courts are integrated and administratively separate from the state court system.

Colorado district courts are the state trial courts of general jurisdiction in the U.S. state of Colorado. 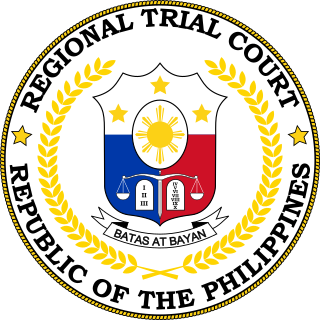 The Regional Trial Courts are the highest trial courts in the Philippines. In criminal matters, they have original jurisdiction.

The judiciary of Iowa is a branch of the Government of Iowa that interprets and applies the laws of Iowa, to ensure equal justice under law, and to provide a mechanism for dispute resolution. Article V of the Constitution of the State of Iowa defines the judiciary as comprising a Supreme Court, district courts, and any inferior courts established by the General Assembly.

Magistrate judge, in U.S. state courts, is a title used for various kinds of judges, typically holding a low level of office with powers and responsibilities more limited than state court judges of general jurisdiction.