Olympique Lillois was a French association football club from the city of Lille. Founded in 1902 they merged with SC Fives in 1944 to form Lille OSC. [1]

Lille Olympique Sporting Club, commonly referred to as LOSC, LOSC Lille or simply Lille, is a French professional football club based in Lille, Hauts-de-France that competes in Ligue 1, the top flight of French football. Lille has played its home matches since 2012 at Stade Pierre-Mauroy, the fourth-largest football stadium in France. The 50,186-capacity retractable roof venue replaced the club's previous home of Stadium Lille-Metropole.

Association Sportive de Cannes Football is a French association football club based in Cannes. The club was formed 1902 as a sports club and currently plays in the Championnat National 3, the fifth division of French football. Cannes plays its home matches at the Stade Pierre de Coubertin, located within the city. The team is managed by Ludovic Pollet.

Le Havre Athletic Club is a French association football club based in Le Havre, Normandy. The club was founded as an athletics and rugby club in 1872, making Le Havre AC the oldest professional French football club.

Red Star Football Club, also known simply as Red Star, is a French association football club founded in Paris in 1897, and is the fourth oldest French football club, after Standard AC of Paris, Le Havre AC and Girondins de Bordeaux. In the 2019–20 season the club plays in the Championnat National, the French third tier, after being relegated from Ligue 2 at the end of the 2018–19 season. It plays matches at Stade Bauer. The team is managed by Habib Beye. 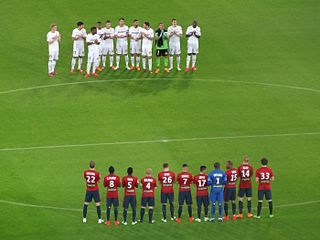 The Derby du Nord is a football rivalry contested between French clubs Lille OSC and RC Lens, two of the region's most successful clubs. Both clubs are located in northern France, though in different departments: Lille in the Nord and Lens in the Pas-de-Calais. The name can refer to matches involving Lille and Valenciennes as both clubs are located within the Nord department; however, the name historically applies mainly to matches involving Lille and Lens. As a result, the Lille–Valenciennes match is sometimes referred to as the Petit Derby du Nord.

SC Fives was a French association football club from Fives, a suburb in the east of Lille. Founded in 1901, the club merged with Olympique Lillois in 1944 to form Lille OSC. 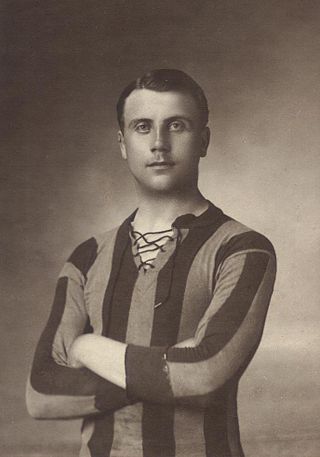 Union Sportive Quevillaise-Rouen Métropole, known as US Quevilly-Rouen, US Quevilly, QRM, Quevilly-Rouen, or simply Quevilly, is a football club based in Le Petit-Quevilly, France. The club plays in Ligue 2 and hosts its home matches at the Stade Robert Diochon, which has a capacity of 12,018.

The Pyrenees Cup, officially Challenge International du Sud de la France, was an international football competition contested by Spanish and French clubs based in the territories of Pyrénées. There have been five tournaments for the Pyrenees Cup which were held between 1910 and 1914 with the final of the championship being held in the region's capital, Toulouse. However, the last two finals were held in Barcelona. The competition was played for 5 years, from 1910 to 1914, before disappearing due to the first World War. The tournament stopped due to the beginning of World War I in 1914. It was organized by the Pyrenees Committee, which was one of the regional bodies of the USFSA, in charge of the competitions in the south of France. 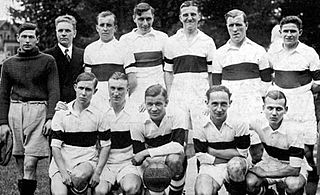 Georges Fernand Olivier Winckelmans was a French footballer and coach. He was born in Lambersart (Nord).

Statistics of the USFSA Football Championship in the 1914 season.

Union Sportive Tourquennoise, commonly shortened to US Tourcoing, is a French football club founded in 1902 and based in Tourcoing. The club played in the Championnat National 3 for five seasons since 2014–2015 after finishing first in the Division Honneur of Nord-Pas-de-Calais during the 2013–2014 season, but were relegated back to the sixth level in 2019.

Boubakary Soumaré is a French professional footballer who plays as a midfielder for Premier League club Leicester City. He is a former France youth international.