Together with business support systems (BSS), they are used to support various end-to-end telecommunication services. BSS and OSS have their own data and service responsibilities. The two systems together are often abbreviated OSS/BSS, BSS/OSS or simply B/OSS.

The acronym OSS is also used in a singular form to refer to all the Operations Support Systems viewed as a whole system.

Different subdivisions of OSS have been proposed by the TM Forum, industrial research labs, or OSS vendors. In general, an OSS covers at least the following five functions:

Before about 1970, many OSS activities were performed by manual administrative processes. However, it became obvious that much of this activity could be replaced by computers. In the next 5 years or so, the telephone companies created a number of computer systems (or software applications) which automated much of this activity. This was one of the driving factors for the development of the Unix operating system and the C programming language. The Bell System purchased their own product line of PDP-11 computers from Digital Equipment Corporation for a variety of OSS applications. OSS systems used in the Bell System include AMATPS, CSOBS, EADAS, Remote Memory Administration System (RMAS), Switching Control Center System (SCCS), Service Evaluation System (SES), Trunks Integrated Record Keeping System (TIRKS), and many more. OSS systems from this era are described in the Bell System Technical Journal, Bell Labs Record, and Telcordia Technologies (now part of Ericsson) SR-2275. [3]

Many OSS systems were initially not linked to each other and often required manual intervention. For example, consider the case where a customer wants to order a new telephone service. The ordering system would take the customer's details and details of their order, but would not be able to configure the telephone exchange directly—this would be done by a switch management system. Details of the new service would need to be transferred from the order handling system to the switch management system—and this would normally be done by a technician re-keying the details from one screen into another—a process often referred to as "swivel chair integration". This was clearly another source of inefficiency, so the focus for the next few years was on creating automated interfaces between the OSS applications—OSS integration. Cheap and simple OSS integration remains a major goal of most telecom companies.

A lot of the work on OSS has been centered on defining its architecture. Put simply, there are four key elements of OSS:

During the 1990s, new OSS architecture definitions were done by the ITU Telecommunication Standardization Sector (ITU-T) in its Telecommunications Management Network (TMN) model. This established a 4-layer model of TMN applicable within an OSS:

A fifth level is mentioned at times being the elements themselves, though the standards speak of only four levels. This was a basis for later work. Network management was further defined by the ISO using the FCAPS model—Fault, Configuration, Accounting, Performance and Security. This basis was adopted by the ITU-T TMN standards as the Functional model for the technology base of the TMN standards M.3000 – M.3599 series. Although the FCAPS model was originally conceived and is applicable for an IT enterprise network, it was adopted for use in the public networks run by telecommunication service providers adhering to ITU-T TMN standards.

A big issue of network and service management is the ability to manage and control the network elements of the access and core networks. Historically, many efforts have been spent in standardization fora (ITU-T, 3GPP) in order to define standard protocol for network management, but with no success and practical results. On the other hand IETF SNMP protocol (Simple Network Management Protocol) has become the de facto standard for internet and telco management, at the EML-NML communication level.

From 2000 and beyond, with the growth of the new broadband and VoIP services, the management of home networks is also entering the scope of OSS and network management. DSL Forum TR-069 specification has defined the CPE WAN Management Protocol (CWMP), suitable for managing home networks devices and terminals at the EML-NML interface.

The TM Forum, formerly the TeleManagement Forum, is an international membership organization of communications service providers and suppliers to the communications industry. While OSS is generally dominated by proprietary and custom technologies, TM Forum promotes standards and frameworks in OSS and BSS.

By 2005, developments in OSS architecture were the results of the TM Forum's New Generation Operations Systems and Software (NGOSS) program, which was established in 2000. This established a set of principles that OSS integration should adopt, along with a set of models that provide standardized approaches. NGOSS was renamed Frameworx.

The TM Forum describes Frameworx as an architecture that is:

The components interact through a common communications vehicle (using an information exchange infrastructure; e.g., EAI, Web Services, EJB). The behavior can be controlled through the use of process management and/or policy management to orchestrate the functionality provided by the services offered by the components.

The early focus of the TM Forum's NGOSS work was on building reference models to support a business stakeholder view on process, information and application interaction. Running in parallel were activities that supported an implementation stakeholder view on interface specifications to provide access to OSS capability (primarily MTNM). The MTNM work evolved into a set of Web Services providing Multi-Technology Operations System Interfaces MTOSI. Most recently,[ when? ] the OSS through Java initiative (OSS/J) joined the TMF to provide NGOSS-based BSS/OSS APIs.

Open Digital Architecture (ODA) offers an industry-agreed blueprint, language and set of key design principles to follow. It will provide pragmatic pathways for the journey from maintaining monolithic, legacy software solutions, towards managing nimble, cloud based capabilities that can be orchestrated using AI. It is a reference architecture that maps TM Forum’s Open APIs against technical and business platform functions. [4] 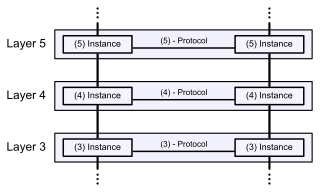 The Open Systems Interconnection model is a conceptual model that characterises and standardises the communication functions of a telecommunication or computing system without regard to its underlying internal structure and technology. Its goal is the interoperability of diverse communication systems with standard communication protocols.

The Intelligent Network (IN) is the standard network architecture specified in the ITU-T Q.1200 series recommendations. It is intended for fixed as well as mobile telecom networks. It allows operators to differentiate themselves by providing value-added services in addition to the standard telecom services such as PSTN, ISDN on fixed networks, and GSM services on mobile phones or other mobile devices.

FCAPS is the ISO Telecommunications Management Network model and framework for network management. FCAPS is an acronym for fault, configuration, accounting, performance, security, the management categories into which the ISO model defines network management tasks. In non-billing organizations accounting is sometimes replaced with administration. 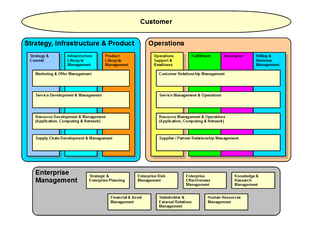 The Business Process Framework is an operating model framework for telecom service providers in the telecommunications industry. The model describes the required business processes of service providers, and defines key elements and how they should interact.

In computer networks, a network element is a manageable logical entity uniting one or more physical devices. This allows distributed devices to be managed in a unified way using one management system.

The next-generation network (NGN) is a body of key architectural changes in telecommunication core and access networks. The general idea behind the NGN is that one network transports all information and services by encapsulating these into IP packets, similar to those used on the Internet. NGNs are commonly built around the Internet Protocol, and therefore the term all IP is also sometimes used to describe the transformation of formerly telephone-centric networks toward NGN.

A service delivery platform (SDP) is a set of components that provides a service(s) delivery architecture for a type of service delivered to consumer, whether it be a customer or other system. Although it is commonly used in the context of telecommunications, it can apply to any system that provides a service. Although the TM Forum (TMF) is working on defining specifications in this area, there is no standard definition of SDP in industry and different players define its components, breadth, and depth in slightly different ways.

In telecommunications, Multi-Technology Operations System Interface (MTOSI) is a standard for implementing interfaces between OSSs. Service providers (carriers) use multiple Operational Support Systems (OSS) to manage complex networks. Since the various parts of the network must interact, so must the OSSs. It is standardized by the Telemanagement ForuM . The TMF Frameworx provides a set of reference models that aid in analyzing and designing next generation BSS and OSS solutions that may utilize the MTOSI interface specifications.

Cramer Systems is a British telecommunications firm, founded in 1996 by Jon Craton, Mark Farmer and Don Gibson. The firm developed Operations support systems (OSSs) for the telecommunication industry clients such as Vodafone, KPN Telecom, and British Telecom. In August 2006 Amdocs announced the completion of the acquisition of the company. The products developed by Cramer have now been integrated into the Amdocs product suite. The company name is a combination of three letters from the names of Craton and Farmer.

With current network management technologies, management functions typically reside outside the network in management stations and servers, which interact with network elements and devices via network protocols for management, in order to execute management tasks, including fault, configuration, accounting, performance, and security management, or, short (FCAPS). Most of these tasks are performed on a per-device basis. During network operation, for instance, a management station periodically polls individual devices in its domain for the values of local variables, such as devices counters or performance parameters. These variables are then processed on the management station to compute an estimate of a network-wide state, which is analyzed and acted upon by management applications. This paradigm of interaction between the management system and managed system underlies traditional management frameworks and protocols, including SNMP, TMN and OSI-SM.

OSS/BSS, in telecommunications, refer to operations support system and business support system. The distinction emphasizes a separation of concerns between maintaining network operations and the business around which that network is built. Communications service providers support a broad range of services and functions with their OSS/BSS. BSS primarily consists of order capture, Customer Relationship Management and Telecommunications billing whereas OSS covers Order Management, Network Inventory Management and Network Operations.