The Projektions-AG Union (generally shortened to PAGU) was a German film production company which operated between 1911 and 1924 during the silent era. From 1917 onwards the company functioned as an independent unit of Universum Film AG, and was eventually merged into it entirely.

The company was founded by Paul Davidson, a leading cinema-owner who branched out into production. Initially it was based in Frankfurt, but quickly moved its headquarters to Berlin as it was clear that this had become the centre of the German film industry. [1]

At the time the majority of films being shown in Germany were foreign-produced, a situation which Davidson attempted to change. One of his first major coups was signing up the Danish film star Asta Nielsen for a lengthy contract. [2] A rising star of the company was also the actor-director Ernst Lubitsch who made a series of comedies for PAGU. PAGU was also notable for its success in breaking a boycott of German playwrights, who were refusing to allow their works to be adapted for the screen. [3] Davidson was even able to persuade the leading German stage director Max Reinhardt to make two films, shot in Italy, for the company.

The company's position was boosted when the First World War broke out and the German government restricted the screening of non-German films. [4] Davidson produced propaganda films at the request of the government such as Dr. Hart's Diary (1917). This led the same year to PAGU becoming a founder of the new government-backed conglomerate UFA, which merged many of German's leading production companies into a single organisation which would dominate German cinema for the next thirty years. Now functioning as one of several production units of UFA, the company made further propaganda films such as The Yellow Passport (1918). [5]

Following the end of the war Davidson grew increasingly unhappy with his subordinate position at UFA and he resigned from the company in 1922. Germany's film industry boomed after 1918 and was increasingly artistically respected, partly due to the films produced by Davidson's PAGU production unit featuring Emil Jannings and Pola Negri. Davidson made an attempt to buy back PAGU from UFA, but this was rejected - partly because it was believed he was backed by the large Hollywood studios who wished to gain a foothold in the German market. [6] Soon afterwards PAGU's existence as a notionally separate company was brought to an end.

UFA GmbH, shortened to UFA, is today a film and television production company that unites all production activities of the media conglomerate Bertelsmann in Germany. Its name derives from Universum-Film Aktiengesellschaft, a major German film company headquartered in Babelsberg, producing and distributing motion pictures from 1917 through to the end of the Nazi era. The name UFA was revived by Bertelsmann for an otherwise unrelated film and television outfit, UFA GmbH. 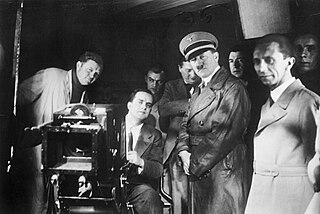 Nazism created an elaborate system of propaganda, which made use of the new technologies of the 20th century, including cinema. Nazism courted the masses by the means of slogans that were aimed directly at the instincts and emotions of the people. The Nazis valued film as a propaganda instrument of enormous power. The interest that Adolf Hitler and his propaganda minister Joseph Goebbels took in film was not only the result of a personal fascination. The use of film for propaganda had been planned by the Nazi Party as early as 1930, when the party first established a film department.

Erich Pommer was a German-born film producer and executive. Pommer was perhaps the most powerful person in the German and European Film Industries in the 1920s and early 1930s.

Die Deutsche Wochenschau was the title of the unified newsreel series released in the cinemas of Nazi Germany from June 1940 until the end of World War II. The coordinated newsreel production was set up as a vital instrument for the mass distribution of Nazi propaganda at war. Today the preserved Wochenschau short films make up a significant part of the audiovisual records of the Nazi era.

Women Are Better Diplomats is a 1941 German musical comedy film directed by Georg Jacoby and starring Marika Rökk, Willy Fritsch and Aribert Wäscher. It was based on a novel by Hans Flemming. The film was the first German feature film to be made in colour, and was one of the most expensive films produced during the Third Reich. The film met with a positive public response and was among the most popular German films of the early war years.

Nations were new to cinema and its capability to spread and influence mass sentiment at the start of World War I. The early years of the war were experimental in regard to using films as a propaganda tool, but eventually became a central instrument for what George Mosse has called the "nationalization of the masses" as nations learned to manipulate emotions to mobilize the people for a national cause against the imagined or real enemy.

Jules Greenbaum was a German pioneering film producer. He founded the production companies Deutsche Bioscope, Deutsche Vitascope and Greenbaum-Film and was a dominant figure in German cinema in the years before the First World War. He is also known for his early experiments with sound films around twenty years before the success of The Jazz Singer made them a more established feature of cinema.

Messter Film was a German film production company which operated during the silent era. It was founded by the German film pioneer Oskar Messter who already owned a chain of cinemas. It was based in Berlin which had emerged as the centre of the German film industry. Messter quickly established itself as dominant force in German production, particularly during the boom years of the First World War when foreign films faced many restrictions in Germany. Messter played a prominent role in the development of the German feature film, moving away from the shorter running times which had been standard in the early years of cinema. Messter also produced its own newsreels.

Tobis Film was a German film production and film distribution company. Founded in the late 1920s as a merger of several companies involved in the switch from silent to sound films, the organisation emerged as a leading German sound studio. Tobis used the Tri-Ergon sound-on-film system under the Tobis-Klang trade name. The Ufa production company had separate rights to the Tobis system, which it used under the trade name of Ufa-Klang. Some Tobis films were released in Germany by the subsidiary Europa Film.

The Ufa-Pavillon am Nollendorfplatz was a cinema located at 4 Nollendorfplatz, Schöneberg, Berlin. Built in 1912–13 and designed and decorated by leading artistic practitioners of the day, it was the German capital's first purpose-built, free-standing cinema Described as "historically, [...] the most important cinema in Berlin", it incorporated a number of technical innovations such as an opening roof and a daylight projection screen, and opened as the Nollendorf-Theater in March 1913.

Deulig Film or Deutsche Lichtbild-Gesellschaft was a German film production and distribution company. It was established in 1916 by the German business tycoon and media mogul Alfred Hugenberg. The company's foundation, during the First World War, was intended to promote Germany's military cause but it also supported the commercial interests of several major industrial companies who backed the enterprise. 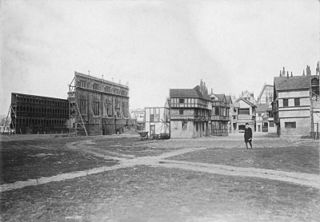 The Tempelhof Studios are a film studio located in Tempelhof in the German capital of Berlin. They were founded in 1912, during the silent era, by German film pioneer Alfred Duskes, who built a glass-roofed studio on the site with financial backing from the French company Pathé. The producer Paul Davidson's PAGU then took control and constructed a grander structure. The First World War propaganda drama The Yellow Passport, the historical comedy Madame DuBarry and the expressionist 1920 silent film The Golem were made there by PAGU. 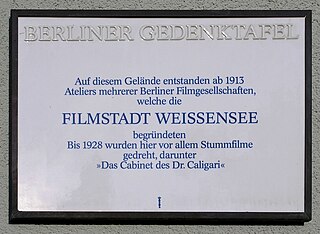 Capitol Film was a West German film production company active between 1953 and 1956 established by Arno Hauke. The company was able to utilise the assets of the former UFA company, now being held in a trust of which Hauke was an accountant and director. With the trust's funds Hauke had also acquired a distribution company Prisma Film to release Capitol's films.