Last updated June 01, 2020
This article is about the architectural feature. For the computer user interface element, see paned window (computing).
Type of window in architecture

In architecture, a paned window is a window divided into panes of glass, usually rectangular pieces of glass that are joined to create the glazed element of the window. Window panes are often separated from other panes (or "lights") by lead strips, or glazing bars, moulded wooden strips known as muntins in the US. [1] 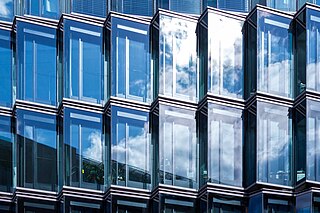 Glass is a non-crystalline, often transparent amorphous solid, that has widespread practical, technological, and decorative use in, for example, window panes, tableware, and optics. Glass is most often formed by rapid cooling (quenching) of the molten form; some glasses such as volcanic glass are naturally occurring. The most familiar, and historically the oldest, types of manufactured glass are "silicate glasses" based on the chemical compound silica, the primary constituent of sand. Soda-lime glass, containing around 70% silica, account for around 90% of manufactured glass. The term glass, in popular usage, is often used to refer only to this type of material, although silica-free glasses often have desirable properties for applications in modern communications technology. Some objects, such as drinking glasses and eyeglasses, are so commonly made of silicate-based glass that they are simply called by the name of the material.

A window is an opening in a wall, door, roof or vehicle that allows the passage of light, sound, and sometimes air. Modern windows are usually glazed or covered in some other transparent or translucent material, a sash set in a frame in the opening; the sash and frame are also referred to as a window. Many glazed windows may be opened, to allow ventilation, or closed, to exclude inclement weather. Windows often have a latch or similar mechanism to lock the window shut or to hold it open by various amounts.

The fuselage is an aircraft's main body section. It holds crew, passengers, and cargo. In single-engine aircraft, it will usually contain an engine, as well, although in some amphibious aircraft the single engine is mounted on a pylon attached to the fuselage, which in turn is used as a floating hull. The fuselage also serves to position control and stabilization surfaces in specific relationships to lifting surfaces, which is required for aircraft stability and maneuverability.

Float glass is a sheet of glass made by floating molten glass on a bed of molten metal, typically tin, although lead and other various low-melting-point alloys were used in the past. This method gives the sheet uniform thickness and very flat surfaces.

A shoji is a door, window or room divider used in traditional Japanese architecture, consisting of translucent sheets on a lattice frame. Where light transmission is not needed, the similar but opaque fusuma is used. Shoji usually slide, but may occasionally be hung or hinged, especially in more rustic styles.

Polyvinyl butyral is a resin mostly used for applications that require strong binding, optical clarity, adhesion to many surfaces, toughness and flexibility. It is prepared from polyvinyl alcohol by reaction with butyraldehyde. The major application is laminated safety glass for automobile windshields. Trade names for PVB-films include KB PVB, Saflex, GlasNovations, Butacite, WINLITE, S-Lec, Trosifol and EVERLAM. PVB is also available as 3D printer filament that is stronger and more heat resistant than polylactic acid (PLA). 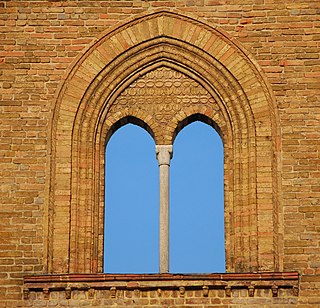 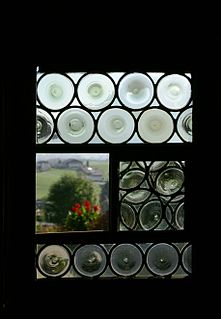 Crown glass was an early type of window glass. In this process, glass was blown into a "crown" or hollow globe. This was then transferred from the blowpipe to a punty and then flattened by reheating and spinning out the bowl-shaped piece of glass (bullion) into a flat disk by centrifugal force, up to 5 or 6 feet in diameter. The glass was then cut to the size required.

A putty knife is a specialized tool used when glazing single glazed windows, to work putty around the edges of each pane of glass. An experienced glazer will apply the putty by hand, and then smooth it with the knife. Modern insulated glazing may use other ways of securing the glass to the window frame.

A sash window or hung sash window is made of one or more movable panels, or "sashes". The individual sashes are traditionally paned windows, but can now contain an individual sheet of glass. 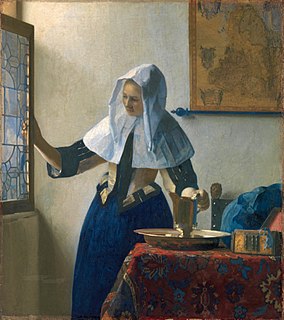 Leadlights, leaded lights or leaded windows are decorative windows made of small sections of glass supported in lead cames. The technique of creating windows using glass and lead came is discussed at came glasswork. The term leadlight could be used to describe all windows in which the glass is supported by lead, but traditionally and correctly, a distinction is made between stained glass windows and leadlights, the former being associated with the ornate painted images on windows of churches and other such works of architecture and the latter with the windows of vernacular commercial and domestic architecture and defined by its simplicity. 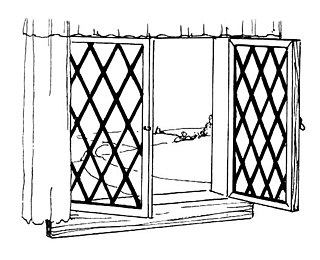 A muntin (US), muntin bar, glazing bar (UK) or sash bar is a strip of wood or metal separating and holding panes of glass in a window. Muntins can be found in doors, windows and furniture, typically in western styles of architecture. Muntins divide a single window sash or casement into a grid system of small panes of glass, called "lights" or "lites".

A casement is a window that is attached to its frame by one or more hinges at the side. They are used singly or in pairs within a common frame, in which case they are hinged on the outside. Casement windows are often held open using a casement stay. Windows hinged at the top are referred to as awning windows, and ones hinged at the bottom are called hoppers.

Plate glass, flat glass or sheet glass is a type of glass, initially produced in plane form, commonly used for windows, glass doors, transparent walls, and windscreens. For modern architectural and automotive applications, the flat glass is sometimes bent after production of the plane sheet. Flat glass stands in contrast to container glass and glass fibre.

The Thomas R. McGuire House, located at 114 Rice Street in the Capitol View Historic District of Little Rock, Arkansas, is a unique interpretation of the Colonial Revival style of architecture. Built by Thomas R. McGuire, a master machinist with the Iron Mountain and Southern Railroad, it is the finest example of the architectural style in the turn-of-the-century neighborhood. It is rendered from hand-crafted or locally manufactured materials and serves as a triumph in concrete block construction. Significant for both its architecture and engineering, the property was placed on the National Register of Historic Places on December 19, 1991. 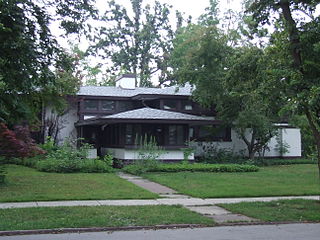 The Walter V. Davidson House, located at 57 Tillinghast Place in Buffalo, New York, was designed by Frank Lloyd Wright and built in 1908. It is an example of Wright's Prairie School architectural style. The house is a contributing property to the Parkside East Historic District, a neighborhood laid out by renowned American landscape architect Frederick Law Olmsted in 1876, and also a City of Buffalo landmark.

The Cass Building is a low-rise office building at 455 West Fort Street, at the southeast corner of First Street, in Detroit, Michigan. It is also known as Detroit's Work Place.

Solarized architectural glass is a type of architectural glass, used as a building material, that has changed color as a result of a chemical reaction between a glass decolorizer and ultra-violet light. Sometimes known as "desert glass", or "sun-purpled glass", solarized glass is most commonly observed as bottles and glassware. However, solarized glass does occasionally appear in architectural contexts and uses, especially window panes, doorknobs, and pavement lights. The physical characteristics and the relative rarity of this glass for windows has meant that it is understood as a distinct glass type.