The Duty to Remain Silent is a 1928 German silent drama film directed by Carl Wilhelm and starring Marcella Albani, Vivian Gibson, Angelo Ferrari. It was based on a novel by Friedrich Werner van Oestéren. The film's art direction was by Max Heilbronner. It premiered on 8 February 1928. 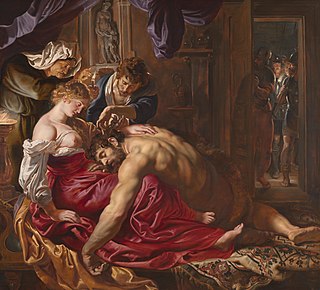 Samson and Delilah is a painting by the Flemish Baroque painter Peter Paul Rubens (1577–1640) which is currently on display in the National Gallery. It dates from about 1609 to 1610. Two preliminary copies of the painting also exist today: an ink and wash drawing on paper, and an oil sketch on wood panel. The oil sketch is currently on display in the Cincinnati Art Museum, while the ink sketch is being held in a private collection in Amsterdam.

Ladislaus Vajda was a Hungarian screenwriter. He wrote for 40 films in Hungary, Austria and Germany between 1916 and 1932. He was born in Eger, Northern Hungary and died in Berlin, Germany. He was the father of Hungarian film director Ladislao Vajda.

Nicolas Farkas (1890–1982) was an Austro-Hungarian-born cinematographer, screenwriter and film director. Farkas was born in Margitta (Marghita), now in Romania, of Hungarian background. He worked in the Austrian, German and French film industries. During the 1920s he collaborated frequently with the producer/director Alexander Korda. During the 1930s he worked on a number of international co-productions, directing films such as the Anglo-French melodrama The Battle. He also worked as cinematographer on G.W. Pabst's 1933 film Adventures of Don Quixote. 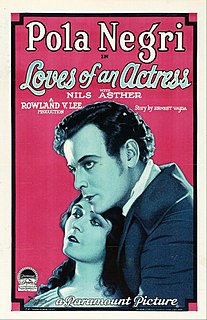 Loves of an Actress is a lost 1928 silent film romance directed by Rowland V. Lee and starring Pola Negri. It was produced by Adolph Zukor and Jesse Lasky with the distribution through Paramount Pictures. The film had a soundtrack of either Vitaphone or Movietone of music and sound effects.

Love in the Ring is a 1930 German sports film directed by Reinhold Schünzel and starring Max Schmeling, Renate Müller and Olga Tschechowa. Schmeling was a leading German boxer of the 1930s, and the film attempted to capitalise on this. Schmeling later appeared in another boxing-themed film in Knockout (1935).

Franz Rauch (1878–1960) was a German screenwriter and actor. He worked on over forty films during his career and appeared in several roles as an actor. 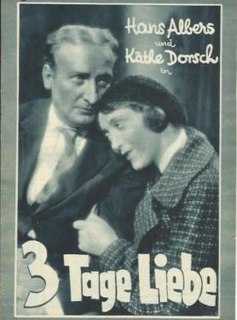 Herbert Körner was a German cinematographer.

Sin and Morality is a 1929 German silent film directed by Erich Kober and starring Charlotte Susa.

The Three Codonas is a 1940 German drama film directed by Arthur Maria Rabenalt and starring René Deltgen, Ernst von Klipstein and Josef Sieber. It is based on the life of the circus performer Alfredo Codona.