From the season 2012—2013 the team competes in Platanias Peribolion Municipal Stadium of Chania, which in the summer of 2012, took place in record time, extensive upgrading and modernization work at all levels to meet in full all obligations set by the organizing principle of the league Super League OPAP and NOVA.

Since then, the Municipal Golf farm has "transformed" into a modern football stadium, with two tiers (one of them covered), journalistic theory, brand-new change rooms for athletes and Referees (female assistants have separate changing rooms), clinic, gym, comfortable office for the observer of the race, room for press conferences, and other facilities.

Chania is a city of Greece and the capital of the Chania regional unit. It lies along the north coast of the island, about 70 km (43 mi) west of Rethymno and 145 km (90 mi) west of Heraklion.

Sellia is a small village in Crete, Greece, in the municipal unit of Vamos, in the regional unit of Chania. The village is located in between the towns of Vamos and Georgioupoli on the Drapano Peninsula, close to the north coast of the island, in the Apokoronas region. It has a winter population of 50 and a summer population of about 150. It is divided into Upper and Lower Selia. It is a very small, quiet rural village with many older homes and plenty of traditional Cretan charm plus views of the Cretan White Mountains and the Mediterranean Sea. There is a kafenion but all services are available in nearby Vamos.

The Stadio Marcantonio Bentegodi is a stadium in Verona, Italy. It is the home of Hellas Verona and Chievo Verona of Serie A and Serie B, respectively. It also hosts the Women's Champions League matches of Bardolino Verona, some youth team matches, rugby matches, athletics events and occasionally even musical concerts. With 39,211 total seats, of which only 31,045 are approved, it is the eighth-largest stadium in Italy by capacity. The stadium is named after the historic benefactor of Veronese sport, Marcantonio Bentegodi. 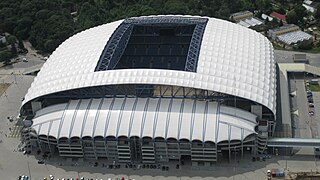 The Municipal Stadium in Poznań, commonly called Bulgarian Street Stadium after the road it is situated on, in the past INEA Stadion[iˈnɛ.a ˈstadjɔn] for sponsorship reasons, is an association football stadium in Poznań, Poland. It has a league capacity of 43,269. The stadium was originally built between 1968 and 1980. From its inauguration in August 1980, Lech Poznań has used the ground as its main venue. It has also been used sporadically by Warta Poznań. The ground is situated on the street ul. Bułgarska in the southwestern part of the city.

Kissamos is a town and municipality and in the west of the island of Crete, Greece. It is part of the Chania regional unit and of the former Kissamos Province which covers the northwest corner of the island. The city of Kissamos is also known as Kastelli Kissamou and often known simply as Kastelli after the Venetian castle that was there. It is now a port and fishing harbour, with a regular ferry from the Peloponnese via Kythira. A town museum is located in the old Venetian governor's palace and there have been important archaeological finds in the town, including fine mosaics, dating from the Roman city of Kisamos. The head town of the municipality is Kastelli-Kissamos itself.

Almyrida is a seaside resort located in the Apokoronas region of the northwest coast of the island of Crete, Greece. The village is approximately 20 kilometers from Chania, in Chania regional unit. Traditionally a fishing village Almyrida has a long beach that is popular with families. Wind surfers, kayaks, paddle boats and beach chairs can be rented on the beach. There are many hotels, rental rooms, taverns, bars, snack and cafe bars, gift shops, grocery stores and bakeries, all of which are open late into the night in the tourist season. Almyrida is famous for its delicious food, as well as for the shallow waters, ideal for children.

Xirosterni is a village and a community located in the Apokoronas region close to the northwest coast of the island of Crete, Greece, in Chania regional unit. The community consists of the settlements Xirosterni and Litsarda. It is approximately 25 kilometres (16 mi) from Chania.

Sougia is a community and a small village in Chania regional unit on the island of Crete, Greece. It is part of the municipal unit of East Selino. It is located on the south coast of the island, 70 km south of Chania. The community consists of the following villages :

Maza is a small village in Chania regional unit on the island of Crete, Greece. It has 100 residents, and is in the municipal unit of Kryonerida.

Lamia Football Club is a Greek professional football club based in Lamia, Greece. It was founded in 1964. The club plays in the Super League, the first tier of Greek football. It plays its home matches at the Lamia Municipal Stadium. 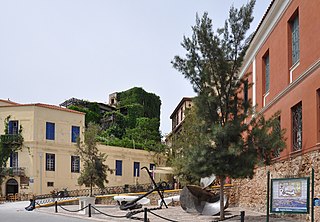 The Nautical Museum of Crete is a museum in Chania, Crete, Greece. Its collection includes models of ships, nautical instruments, painting, historical photographs and war relics. The material is classified chronologically, starting from the Bronze Age up to our times.

Platanias Football Club is a Greek professional football club based in Platanias, Chania, Greece. The club currently competes in the Super League 2, the second tier of the Greek football league system, and hosts its home games at the Perivolia Municipal Stadium. Platanias is the first, and to this day only club to have represented Chania in the Super League, having made a total of 6 appearances during 2012–2018. Their colors are red and white. 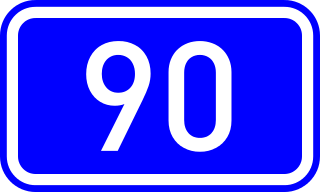 Greek National Road 90, also known as VOAK is a national highway of Greece. It runs along the north coast of the island Crete. It connects Kissamos in the west with Siteia in the east, via Chania, Rethymno, Heraklion and Agios Nikolaos. Three sections have been upgraded to motorway standard. These new sections carry the designation A90. In future the entire VOAK will be motorway standard from Kissamos to Siteia. The road is part of the European route E75.

The Victor Tedesco Stadium is a stadium in Hamrun, Malta. It opened in 1996. It has a capacity of 6,000, with 1,800 seated. It is the home ground of Maltese football club Ħamrun Spartans, who currently play in the Maltese Premier League. It is used for matches from the Maltese Premier League, the Maltese First Division, and some games from the Maltese Second Division. It is also used by all the Ħamrun Spartans teams from the youth teams to the senior teams for training. The stadium also has a bar, underground dressing rooms, some offices, and a five-a-side pitch next door.

Acre Municipal Stadium, also Toto Acre Stadium, is a soccer stadium in Acre, Israel. It is the home ground of Hapoel Acre which plays in Liga Leumit, the second tier of the Israeli football league system. The stadium is located at the southern entrance of town, near the Ein HaMifratz intersection.

The 2013–14 Football League is the second division of the Greek professional football system and the fourth season under the name Football League after previously being known as Beta Ethniki. This is the first season after 1982–83 that the league has more than one groups. The groups are created based on geographical criteria.

Lamia Municipal Stadium is a football stadium in the Greek city of Lamia which hosts the home matches of Superleague Greece side PAS Lamia 1964. It holds approximately 5,500 seats.

Chania Football Club is a Greek professional football club based in Chania, Crete, Greece. They were established in 2017, as a result of a merger between the two regional clubs representing the Chania district in the Greek Second Division, PGS Kissamikos and AO Chania. The club currently plays in the Super League 2, the second tier of the Greek football league system.