Peterborough House (aliasMillbank House, later Grosvenor House), on the south-west side of Parsons Green, near Eel Brook Common, [1] was a London townhouse owned by the Mordaunt family, Earls of Peterborough and later by the Grosvenor family. It was the most westerly townhouse in the City of Westminster.

The mansion was built by John Mordaunt, 1st Earl of Peterborough and remained the property of his descendants until the death in 1735 of Charles Mordaunt, 3rd Earl of Peterborough. It was then purchased by a member of the Grosvenor family. It has been erroneously stated that it was purchased or built in 1660 by Alexander Davis of the adjoining manor of Ebury, whose sole daughter and heiress, Mary Davis, in 1676 married Sir Thomas Grosvenor, 3rd Baronet (1655–1700), and was the mother of Sir Richard Grosvenor, 4th Baronet (1689–1732) who inherited the house, and further vast property in London, in right of his mother. However Pennant (1793) stated: "that here, in his boyish days, he had often experienced the hospitality of Sir Robert Grosvenor (i.e. the 6th Baronet (1695–1755), younger brother of 4th and 5th baronets) and that this house came by purchase of one of his family (doubtless his maternal grandfather) from the Mordaunts Earls of Peterborough". [2] In Hollar's four sheet View of London and Westminster, published in 1666, the mansion is clearly shown with the name "Peterborough House" under it, "a distinction not very likely to be given, had the Earl of Peterborough only been tenant to the Davis family, and not the ostensible proprietor himself". [3]

Before 1708 it had been let to Mr. Bull, a merchant, [4] at which time the Earl of Peterborough was serving his country in Spain, and in the years 1710 and 1711 was employed on an embassy to Turin, and other Italian courts. "These engagements rendered an expensive establishment at home to him quite unnecessary". [5]

"The present (1892) Earl Grosvenor's grandfather resided in this house until 1755 after which time it was inhabited by Lord Delaval, and Mr. Symmons. Lord Delaval then had it in his own occupation, and occasionally lived in it for nearly 20 years, until 1809, when it was demolished to facilitate the redevelopment of Millbank by the Grosvenor Estate.

Peterborough House and grounds occupied about seven acres, bounded on the east by the River Thames on the south by the former estate of the Marquis of Salisbury, later owned by the UK Government, on the west by Tothill Fields, owned by the Dean and Chapter of Westminster Abbey, and on the north by the Horseferry Road, originally leading from the fields to the ferry to Lambeth. In 1822 the estate was leased by the Grosvenor Estate to John Johnson, who in 1822 was "considerably improving this quarter of the Metropolis, by forming new streets, etc."

Thomas Pennant in his Some Account of London related of Peterborough House (by then "Grosvenor House"):

"Here, in my boyish days, I often experienced the hospitality of the late Sir Robert Grosvenor, its worthy owner, who enjoyed it, by the purchase by one of his family from the Mordaunts, Earls of Peterborough. All the rest of his vast property about London devolved on him in right of his mother, Mary, daughter and heiress of Alexander Davies, of Ebury, in the County of Middlesex. I find, in the plan of London by Hollar, a mansion on this spot under the name of Peterborough House. It probably was built by the first Earl of Peterborough. It was inhabited by his successors, and retained its name till the time of the death of that great but irregular genius, Charles, Earl of Peterborough, in 1735."

Pennant also referred to the mansion as "Millbank House", which name is corroborated by an entry in the minutes of the Vestry of St John's Church, Westminster. On 28 February 1812, a committee appointed to visit the parish boundaries at Millbank reported an alteration of the public footway in front of the site where Lord Grosvenor's house "called Millbank House formerly stood", apparently made under Section 51 of the Act of Parliament 49 Geo. III., cap. 142, the Vauxhall Bridge Act. This is the first mention of the bridge in the Vestry minutes. According to the Act the footpath should not have been closed until "each branch road from the intended bridge through the forecourt of Earl Grosvenor's house should have been completed." According to Dod's Peerage Robert Grosvenor, 1st Baron Ebury was born at Millbank House, Westminster, on 24 April 1801.

It was whilst living here, in 1735, that Charles Mordaunt, 3rd Earl of Peterborough (d.1735), was privately married to his second wife, Mrs. Anastasia Robinson, the celebrated contralto vocalist. He died the same year, after which the house was rebuilt by the Grosvenor family. The Earl of Wilton, brother of the late (1822) Marquess, and uncle of the present (1822) Duke of Westminster, was also born here.

This mansion was the subject of a witty joke made by Joe Miller (1684–1738) in his jest book under the title of "high living" and referencing the house's position as the most westerly in Westminster: "Peterborough House, which is the very last in London one way, being rebuilt, a gentleman asked another 'who lived in it'? His friend told him 'Sir Robert Grosvenor.' 'I don't know,' said the first, 'what estate Sir Robert has, but he ought to have a very good one; for nobody lives beyond him in the whole town.'"

Another joke is recorded as follows: As the dramatist and poet William Congreve (1670-1729) was being rowed in a ferry up the Thames at Millbank, the waterman remarked that, owing to its bad foundation, Peterborough House had sunk a story. "No friend," said Congreve, "I rather believe it is a story raised." 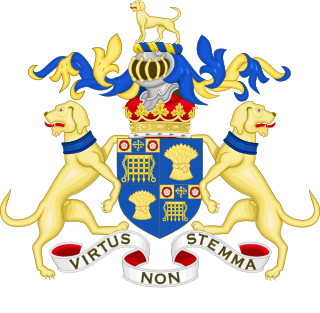 Duke of Westminster is a title in the Peerage of the United Kingdom. It was created by Queen Victoria in 1874 and bestowed upon Hugh Grosvenor, 3rd Marquess of Westminster. It is the most recent dukedom conferred on someone not related to the British royal family. 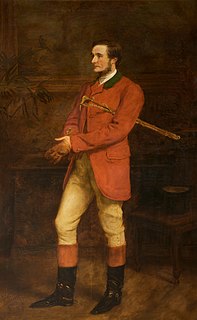 Hugh Lupus Grosvenor, 1st Duke of Westminster,, styled Viscount Belgrave between 1831 and 1845, Earl Grosvenor between 1845 and 1869, and known as The Marquess of Westminster between 1869 and 1874, was an English landowner, politician and racehorse owner. He inherited the estate of Eaton Hall in Cheshire and land in Mayfair and Belgravia, London, and spent much of his fortune in developing these properties. Although he was a member of parliament from the age of 22, and then a member of the House of Lords, his main interests were not in politics, but rather in his estates, in horse racing, and in country pursuits. He developed the stud at Eaton Hall and achieved success in racing his horses, winning the Derby on four occasions. Grosvenor also took an interest in a range of charities. At his death he was considered to be the richest man in Britain. 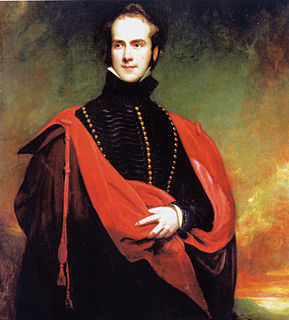 Earl of Wilton, of Wilton Castle in the County of Herefordshire, is a title in the Peerage of the United Kingdom. It was created in 1801 for Thomas Egerton, 1st Baron Grey de Wilton along with the subsidiary title of Viscount Grey de Wilton, also in the Peerage of the United Kingdom. Both titles were created with remainder to the second and all younger sons successively of his daughter Lady Eleanor, wife of Robert Grosvenor, 1st Marquess of Westminster.

Grosvenor House was one of the largest townhouses in London, home of the Grosvenor family for more than a century. Their original London residence was on Millbank, but after the family had developed their Mayfair estates, they moved to Park Lane to build a house worthy of their wealth, status and influence in the 19th century. The house gave its name to Upper Grosvenor Street and Grosvenor Square. 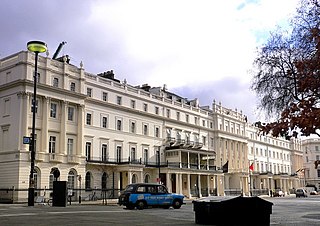 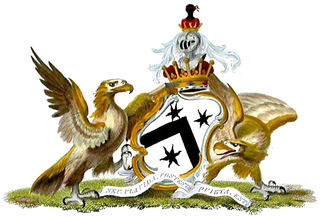 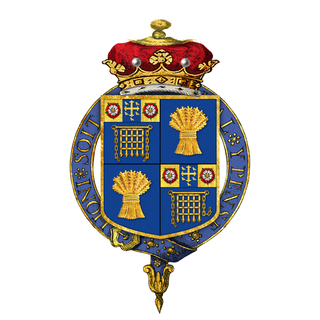 Robert Grosvenor, 1st Marquess of Westminster, was the son of the 1st Earl Grosvenor, whom he succeeded in 1802 as 2nd Earl Grosvenor. He was created Marquess of Westminster in 1831. He was an English Member of Parliament (MP) and an ancestor of the modern-day Dukes of Westminster. Grosvenor continued to develop the family's London estates, he rebuilt their country house, Eaton Hall in Cheshire where he also restored the gardens, and built a new London home, Grosvenor House. He maintained and extended the family interests in the acquisition of works of art, and in horse racing and breeding racehorses. 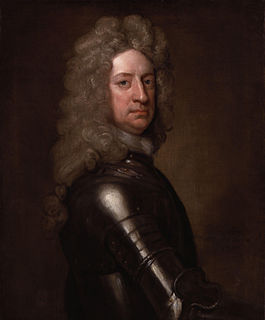 Thomas Egerton, 2nd Earl of Wilton, GCH, PC, known as Thomas Grosvenor until 1814, was a British nobleman and Tory politician. He served as Lord Steward of the Household in 1835 in Sir Robert Peel's first government. 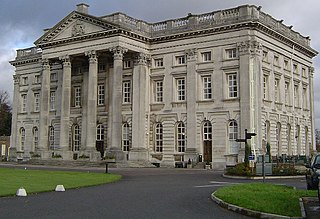 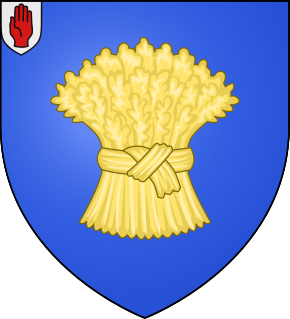 Sir Thomas Grosvenor, 3rd Baronet, born: 20 November 1656, died: 2 July 1700 (aged 43), was an English Member of Parliament, and an ancestor of the modern day Dukes of Westminster. He was the first member of the family to build a substantial house on the present site of Eaton Hall in Cheshire. 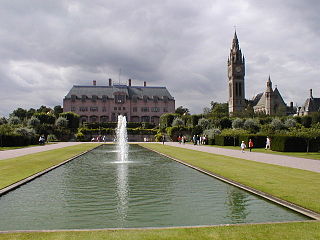 Sir Robert Grosvenor, 6th Baronet of Eaton Hall, Cheshire, was an English politician who sat in the House of Commons from 1733 to 1755. He was an ancestor of the present Dukes of Westminster.

In British usage, the term townhouse originally referred to the town or city residence, in practice normally in London, of a member of the nobility or gentry, as opposed to their country seat, generally known as a country house or, colloquially, for the larger ones, stately home. The grandest of the London townhouses were stand-alone buildings, but many were terraced buildings. 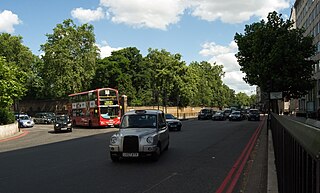 Eia or Eye was an early Medieval manor in the parish of Westminster, Middlesex and is now a part of Central London. It was about one mile west of the Palace of Westminster/Whitehall, about 2 miles west-south-west of the walled City of London, and about half a mile north of the River Thames. A smaller sub-manor called Ebury or Eybury, containing the hamlet Eye Cross, was originally part of the manor. Ebury and a corruption of it, Avery, appear as modern streets and other places. 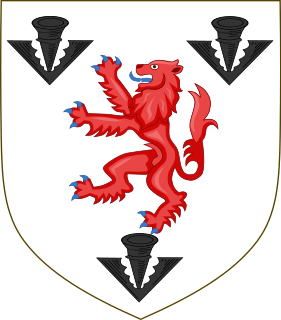 Stephen Poyntz (1685–1750), of Midgham in Berkshire, was an English diplomat and courtier.