Parsons Green is a mainly residential district in the London Borough of Hammersmith and Fulham. The Green itself, which is roughly triangular, is bounded on two of its three sides by the New King's Road section of the King's Road, A308 road and Parsons Green Lane. The wider neighbourhood is bounded by the Harwood and Wandsworth Bridge Roads, A217 road to the East and Munster Road to the West, while the Fulham Road, A3219 road may be said to define its northern boundary. Its southern boundary is less clearly defined as it merges quickly and imperceptibly with the Peterborough estate and Hurlingham.

At its historic centre lie two open spaces, the Green itself and Eel Brook Common. The name stems from the original village green, after the former residence of the rectors of Fulham Parish. [2] It is one of the Conservation areas in Hammersmith and Fulham, that extends from the borough boundary in the east to Fulham High Street in the west. [3]

Timber rights attached to the Green are mentioned in court rolls dating from 1391. In 1625 there were only six rated residents for the area. By 1706, John Bowack opined in his Antiquities of Middlesex that it "was inhabited mostly by gentry and persons of quality". [4]

In the 18th century, changes continued with the building of grand houses with grounds. These were bought by merchants and bankers from the City and not infrequently by members of the Court and their 'associations'. The area acquired a somewhat louche reputation at that time. [7]

Fulham F.C. had their ground in the park for two years from 1889. Early in the 20th century, a few test flights were carried out there with flying machines.

Parsons Green is referred to in an early poem by Sir John Betjeman, The Varsity Students Rag, as a place where the poem's protagonist is said to have a "run-in" with a policeman. [8]

On 15 September 2017, an explosion occurred on a London Underground train at Parsons Green, injuring 29 people. The improvised explosive device was placed in a bucket but did not fully detonate, with injuries being largely burn related. No fatalities were reported. An 18-year-old Iraqi refugee was arrested the next day at the Port of Dover. [9] He was subsequently sentenced to life imprisonment with a minimum jail term of 34 years, having found to have been in contact with members of Islamic State. [10]

In 2018, the ward of Parsons Green & Walham had a population of 11,041 people. [11] Parsons Green & Walham has the highest income of any ward in Hammersmith and Fulham, with an average gross household income of £63,700. [11] The ward is 56.8 per cent White British and 25.4 per cent Other White, mainly consisting of EU citizens, Australasians and North Americans. [11]

Notable residents of the Green 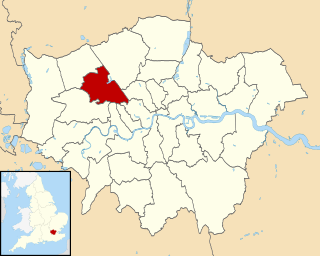 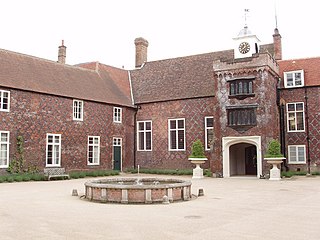 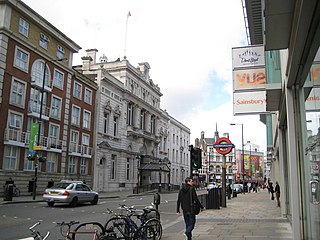 The Metropolitan Borough of Fulham was a Metropolitan borough in the County of London between 1900 and 1965, when it was merged with the Metropolitan Borough of Hammersmith to form the London Borough of Hammersmith and Fulham. It was a riverside borough, and comprised the many centuries-long definition of Fulham so included parts often considered of independent character today Walham Green, Parsons Green, Hurlingham, Sands End and that part of Chelsea Harbour west of Counter's Creek. The SW6 postal district approximately follows this as does the direct, though less empowered, predecessor Fulham civil parish. 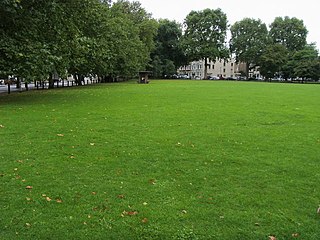 Eel Brook Common is common land in the London Borough of Hammersmith and Fulham, close to Fulham Broadway, with its south-eastern boundary along New King's Road. According to the Fulham Society, the name actually is a derivative of 'hill brook common' - which relates to Musgrave Crescent, which is raised much higher than the surrounding land. It is believed that this is artificial and it probably was originally a Bronze Age mound - either a raised piece of ground to defend against attackers, or as a burial mound. When you leave Eel Brook Common from the north side, you go up a steep ramp - up onto Musgrave Crescent. It is within the Hammersmith and Fulham Conservation Area of Parsons Green. 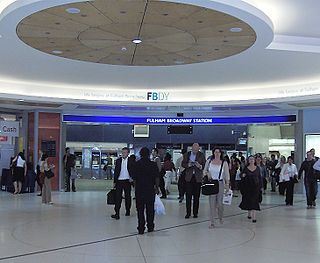 Fulham Broadway is a London Underground station on the Wimbledon branch of the District line. It is between West Brompton and Parsons Green stations and is in Travelcard Zone 2. The station is located on Fulham Broadway (A304). It is the nearest station to Stamford Bridge stadium, the home of Chelsea Football Club. The station is in a cutting that was originally open air until it was covered by the 'Fulham Broadway Shopping Centre' development. The line then resurfaces shortly before West Brompton station. 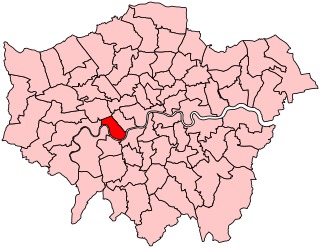 Hammersmith and Fulham was a constituency represented in the House of Commons of the Parliament of the United Kingdom. It elected one Member of Parliament (MP) by the first past the post system of election. The constituency was abolished at the 2010 general election with its wards being split between two new constituencies of Chelsea and Fulham & Hammersmith. 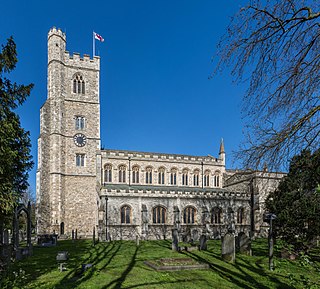 The London Borough of Hammersmith & Fulham, an Inner London borough, has 231 hectares of parks and open spaces that are accessible to the general public, 159 hectares being within parks and 52.5 hectares within cemeteries and churchyards. Wormwood Scrubs and Scrubs Wood, located in the north of the Borough account for 42 hectares and Fulham Palace and Bishop's Park grounds contain another 14 hectares of open space. Private open space includes Hurlingham, Fulham and Queen's Club in West Kensington. 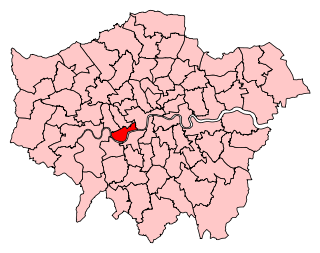 Chelsea and Fulham is a constituency represented in the House of Commons of the UK Parliament since its 2010 creation. It is currently represented by Greg Hands of the Conservative Party. He was the MP for the former neighbouring constituency of Hammersmith and Fulham from 2005 to 2010 before it was abolished. He is currently a minister in the Department for International Trade.

Hammersmith is a parliamentary constituency in the House of Commons of the UK Parliament. It is currently represented by Andy Slaughter, a member of the Labour Party, who has represented the seat since its recreation in 2010. 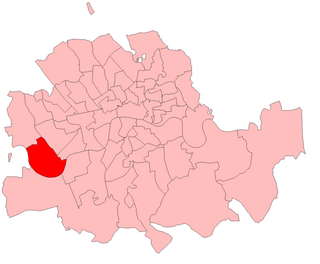 Fulham was a borough constituency centred on the London district of Fulham. It was represented in the House of Commons of the Parliament of the United Kingdom from 1885 until 1918 and from 1955 to 1997.

The Fulham & Hammersmith Chronicle newspaper started life on 6 April 1888, produced at an office in Walham Green, Fulham. The first edition stated that the newspaper was set up "to supply the need which is felt in this district for a genuinely local journal." One of its first part-time editors, was Charles James Feret, who later became known as the 'Historian of Fulham'.

Walham Green is the historic name of an English village, now part of inner London, in the parish of Fulham in the County of Middlesex. It was located between the hamlet of North End to the north, and Parsons Green to the south. To the east it was bounded by Counter's Creek, the historical boundary with the parish of Chelsea, and to the south-east is Sands End.

Shepherds Bush Green is an approximately 8-acre (3.2 ha) triangular area of open grass surrounded by trees and roads with shops in Shepherd's Bush, an area of west London which takes its name from the Green. The Green is also a ward of the London Borough of Hammersmith and Fulham. The population of the ward at the 2011 Census was 12,175. 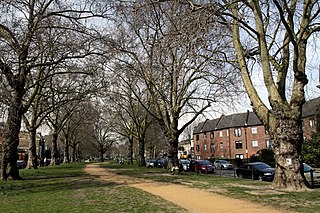 Brook Green is an affluent London neighbourhood in the London Borough of Hammersmith and Fulham. It is located approximately 3.6 miles (5.8 km) west of Charing Cross. It is bordered by Kensington, Holland Park, Shepherd's Bush, Hammersmith and Brackenbury Village. 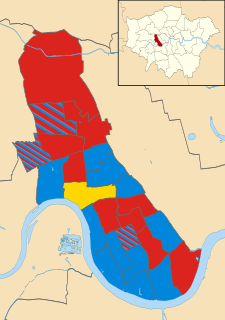 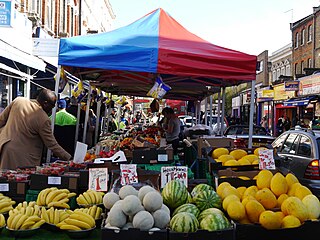 North End Road is a street in West Kensington and Fulham, in the London Borough of Hammersmith and Fulham.

Wikimedia Commons has media related to Parsons Green .
This page is based on this Wikipedia article
Text is available under the CC BY-SA 4.0 license; additional terms may apply.
Images, videos and audio are available under their respective licenses.