Polish Legions in World War I

The Polish Legions (Polish : Legiony Polskie) was a name of the Polish military force (the first active Polish army in generations) [1] established in August 1914 in Galicia soon after World War I erupted between the opposing alliances of the Triple Entente on one side (comprising the British Empire, the French Republic and the Russian Empire); and the Central Powers on the other side, comprising the German Empire and Austria-Hungary. [2] The Legions became "a founding myth for the creation of modern Poland" in spite of their considerably short existence; [1] they were replaced by the Polish Auxiliary Corps (Polish : Polski Korpus Posiłkowy) formation on 20 September 1916, merged with Polish II Corps in Russia on 19 February 1918 for the Battle of Rarańcza against Austria-Hungary, and disbanded following the military defeat at the Battle of Kaniów in May 1918, [3] against imperial Germany. General Haller escaped to France to form the Polish army in the West against the anti-Polish German-Bolshevik treaty. [4]

The Legions took part in many battles against the forces of the Imperial Russia, both in Galicia and in the Carpathian Mountains. They suffered horrendous casualties outnumbered three to one in the Battle of Łowczówek. They captured Kielce, and in 1915 took part in the offensive on Warsaw. In June 1916 the unit had approximately 25,000 soldiers. [1] Both the number of troops and the composition of units changed rapidly. After the Battle of Kostiuchnówka where 2,000 Polish soldiers died delaying a Russian offensive, Józef Piłsudski demanded that the Central Powers issue a guarantee of independence for Poland and partially succeeded. [5] The Polish Legions became the Polish Auxiliary Corps. After the Act of 5th November of 1916 which pronounced the creation of the puppet Kingdom of Poland of 1916–18, the Polish Legions were transferred under German command. However, most of the members refused to swear allegiance to the German Kaiser and were interned in Beniaminów and Szczypiorno (the Oath crisis ). Approximately 3,000 of them were drafted into the Austro-Hungarian army and sent to the Italian Front while approximately 7,500 stayed in the Polish Auxiliary Corps, part of the failed German Polnische Wehrmacht .

According to Prit Buttar, "When war broke out, Piłsudski was quick to recognize that an important preliminary step in Poland's path to independence was the defeat of tsarist Russia..." Piłsudski was no supporter of the Central Powers, and once Russia had been driven out of Polish territory, he believed that he and his fellow Poles would have to persuade the Germans and Austro-Hungarians to leave too, but he held secret meetings with representatives of France and Great Britain to make clear to the western members of the Entente that Polish troops would never fight against them, only against Russia." [6]

The formation of the Legions was declared by Józef Piłsudski in his order of August 22, 1914. The Austrian government, having jurisdiction over the area, officially agreed to the formation on August 27, 1914.

The commanders of the Legions were consecutively: Gen. Karol Trzaska-Durski (September 1914 – February 1916), Gen. Stanisław Puchalski (until November 1916), Col. Stanisław Szeptycki (until April 1917), and Col. Zygmunt Zieliński (until August 1917). After the war ended the officers of the Polish Legions became the backbone of the Polish Army.

Below is a list of prominent Polish battles against the Imperial Russian Army in 1914–16, leading to victories in most cases, with notable exceptions especially during the Brusilov Offensive of 1916.

Notable officers who served in the Polish Legions

Following the foundation of the Second Polish Republic, many served in the Polish Army, and held political as well as elected offices.

Wikimedia Commons has media related to Polish Legions in World War I .

Józef Haller von Hallenburg was a lieutenant general of the Polish Army, a legionary in the Polish Legions, harcmistrz, the president of the Polish Scouting and Guiding Association (ZHP), and a political and social activist. He was the cousin of Stanisław Haller. 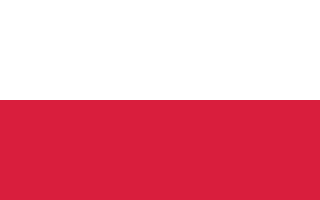 The Kingdom of Poland, also known informally as the Regency Kingdom of Poland, was a short-lived polity and client state proclaimed during World War I by the German Empire and Austria-Hungary on the territories of the former Russian-ruled Congress Poland, governed at the time by the Central Powers as the Government General of Warsaw.

Michał Rola-Żymierski was a Polish high-ranking Communist Party leader, communist military commander and NKVD secret agent. He was appointed as Marshal of Poland by Joseph Stalin, and served in this position from 1945 until his death. He supported the 1981 imposition of Martial law in Poland.

Władysław Bortnowski was a Polish historian, military commander and one of the highest ranking generals of the Polish Army. He is most famous for commanding the Pomorze Army in the Battle of Bzura during the invasion of Poland in 1939. Also notable for serving as president of the Józef Piłsudski Institute of America between 1961 and 1962.

Włodzimierz Zagórski of the Clan of Ostoja was an Austro-Hungary military intelligence soldier, Polish brigadier general, staff officer, and aviator. 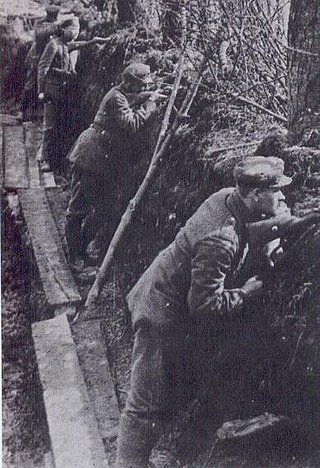 The Battle of Kostiuchnówka was a World War I battle that took place July 4–6, 1916, near the village of Kostiuchnówka (Kostyukhnivka) and the Styr River in the Volhynia region of modern Ukraine, then part of the Russian Empire. It was a major clash between the Russian Army and the Polish Legions during the opening phase of the Brusilov Offensive.

The Battle of Rarańcza was fought between Polish Legionnaires, and Austria-Hungary, from February 15 to 16, 1918, near Rarańcza in Bukovina, and ended with a Polish victory.

Zygmunt Zieliński was a Polish general. He reached the rank of colonel in the Austro-Hungarian Army.

The Charge of Rokitna was a charge of a cavalry squadron of the 2nd Brigade of Polish Legions, fighting for the Austro-Hungarian Army. It took place on June 13, 1915 near the village of Rokytne, which at that time was part of Bessarabia Governorate. A Polish squadron of 70 uhlans, led by Rittmeister Zbigniew Dunin-Wasowicz, attacked positions of the Imperial Russian Army. The battle resulted in a Polish pyrrhic victory: out of 70 soldiers, Poles lost 17 KIA and 23 wounded. Russian losses are unknown. 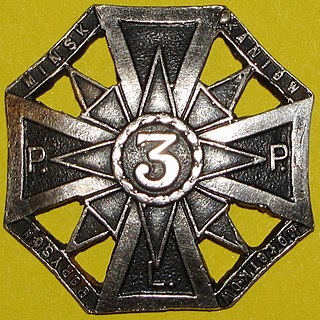 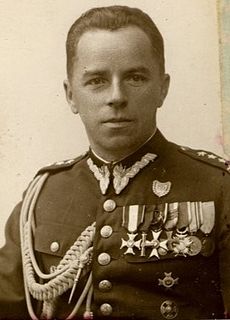 Tadeusz Stefan Aleksander Münnich was a soldier of the Polish Legions in World War I, and Colonel of Infantry of the Polish Army in the Second Polish Republic. Born on August 18, 1893, in Lemberg, Austrian Galicia, he died on October 12, 1959, in London.