In volcanology, a pressure ridge or a tumulus (plural: tumuli), and rarely referred to as a schollendome, is sometimes created in an active lava flow. [1] Formation occurs when the outer edges and surfaces of the lava flow begin to harden. [1] If the advancing lava underneath becomes restricted it may push up on the hardened crust, tilting it outward. [1] [2] Inflation also takes place and is a process where the plastic layer of lava underneath expands as it cools and small crystals form. [1] The end result is a raised mound of hardened lava rock, usually a relatively narrow but long ridge. [1] Tension cracks form on the surface of pressure ridges and run along the axis of elongated ridges, and at both edges of broader ridges, sometimes referred to as pressure plateaus. [1] Along the edges of a pressure ridge, if the tension crack is large enough it will create a liftup cave. [1] Other caves can form inside pressure ridges in which conditions arose for the ridge to form and but the lava that created the internal pressure quickly drained leaving an inflationary cave. [3]

Pressure ridges may reach heights of 15 meters or more and lengths range more than 500 meters but most are less than 100 meters. [4] 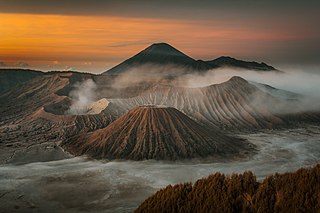 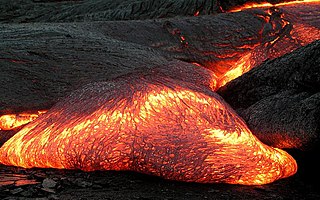 Pillow lavas are lavas that contain characteristic pillow-shaped structures that are attributed to the extrusion of the lava underwater, or subaqueous extrusion. Pillow lavas in volcanic rock are characterized by thick sequences of discontinuous pillow-shaped masses, commonly up to one meter in diameter. They form the upper part of Layer 2 of normal oceanic crust. 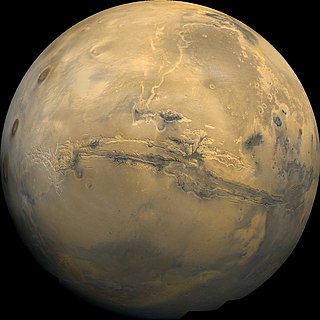 Valles Marineris is a system of canyons that runs along the Martian surface east of the Tharsis region. At more than 4,000 km (2,500 mi) long, 200 km (120 mi) wide and up to 7 km (23,000 ft) deep, Valles Marineris is one of the largest canyons of the Solar System, surpassed in length only by the rift valleys of the mid-ocean ridge system of Earth. 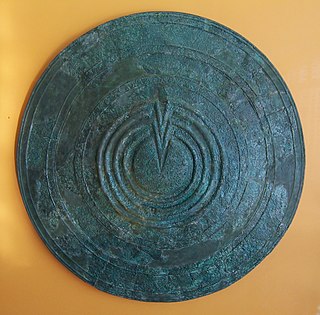 A shield volcano is a type of volcano named for its low profile, resembling a warrior's shield lying on the ground. It is formed by the eruption of highly fluid lava, which travels farther and forms thinner flows than the more viscous lava erupted from a stratovolcano. Repeated eruptions result in the steady accumulation of broad sheets of lava, building up the shield volcano's distinctive form.

A lava tube, or pyroduct, is a natural conduit formed by flowing lava from a volcanic vent that moves beneath the hardened surface of a lava flow. If lava in the tube empties, it will leave a cave. 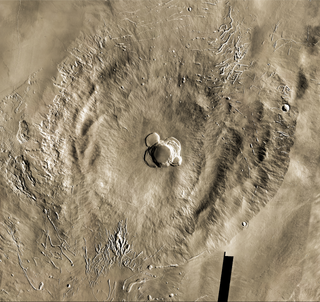 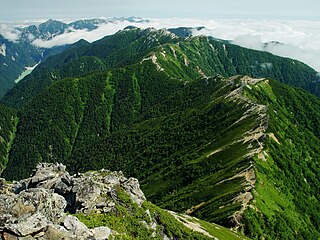 A ridge or a mountain ridge is a geographical feature consisting of a chain of mountains or hills that form a continuous elevated crest for an extended distance. The sides of the ridge slope away from the narrow top on either side. The lines along the crest formed by the highest points, with the terrain dropping down on either side, are called the ridgelines. Ridges are usually termed hills or mountains as well, depending on size.

A dike or dyke, in geological usage, is a sheet of rock that is formed in a fracture of a pre-existing rock body. Dikes can be either magmatic or sedimentary in origin. Magmatic dikes form when magma flows into a crack then solidifies as a sheet intrusion, either cutting across layers of rock or through a contiguous mass of rock. Clastic dikes are formed when sediment fills a pre-existing crack. 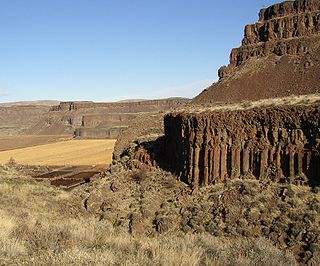 A flood basalt is the result of a giant volcanic eruption or series of eruptions that covers large stretches of land or the ocean floor with basalt lava. Many flood basalts have been attributed to the onset of a hotspot reaching the surface of the earth via a mantle plume. Flood basalt provinces such as the Deccan Traps of India are often called traps, after the Swedish word trappa, due to the characteristic stairstep geomorphology of many associated landscapes.

Lava fields are large, mostly flat areas of surface or subaquatic lava flows. Such features are generally composed of highly fluid basalt lava, and can extend for tens or hundreds of miles across the underlying terrain. 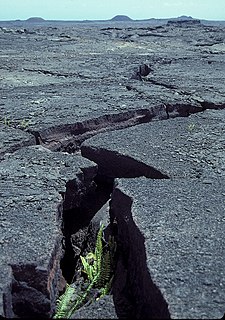 A rift zone is a feature of some volcanoes, especially shield volcanoes, in which a set of linear cracks develops in a volcanic edifice, typically forming into two or three well-defined regions along the flanks of the vent. Believed to be primarily caused by internal and gravitational stresses generated by magma emplacement within and across various regions of the volcano, rift zones allow the intrusion of magmatic dykes into the slopes of the volcano itself. The addition of these magmatic materials usually contributes to the further rifting of the slope, in addition to generating fissure eruptions from those dykes that reach the surface. It is the grouping of these fissures, and the dykes that feed them, that serves to delineate where and whether a rift zone is to be defined. The accumulated lava of repeated eruptions from rift zones along with the endogenous growth created by magma intrusions causes these volcanoes to have an elongated shape. Perhaps the best example of this is Mauna Loa, which in Hawaiian means "long mountain", and which features two very well defined rift zones extending tens of kilometers outward from the central vent. 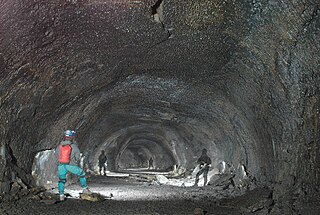 Volcanic activity, or volcanism, has played a significant role in the geologic evolution of Mars. Scientists have known since the Mariner 9 mission in 1972 that volcanic features cover large portions of the Martian surface. These features include extensive lava flows, vast lava plains, and the largest known volcanoes in the Solar System. Martian volcanic features range in age from Noachian to late Amazonian, indicating that the planet has been volcanically active throughout its history, and some speculate it probably still is so today. Both Earth and Mars are large, differentiated planets built from similar chondritic materials. Many of the same magmatic processes that occur on Earth also occurred on Mars, and both planets are similar enough compositionally that the same names can be applied to their igneous rocks and minerals.

Lava is molten or partially molten rock (magma) that has been expelled from the interior of a terrestrial planet or a moon onto its surface. Lava may be erupted at a volcano or through a fracture in the crust, on land or underwater, usually at temperatures from 800 to 1,200 °C. The volcanic rock resulting from subsequent cooling is also often called lava. 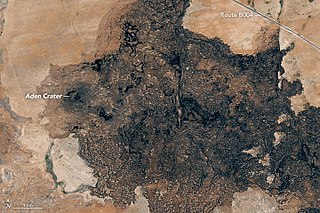 Aden Crater is a small shield volcano located in Doña Ana County, about 25 miles (40 km) southwest of Las Cruces, New Mexico. It is located in the northwest part of the Aden-Afton basalt field, which is part of the central area of the Potrillo volcanic field. 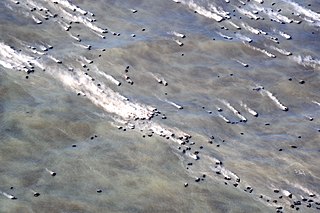 A fissure is a long, narrow crack opening along the surface of Earth. The term is derived from the Latin word fissura, which means 'cleft' or 'crack'. Fissures emerge in Earth's crust, on ice sheets and glaciers, and on volcanoes.